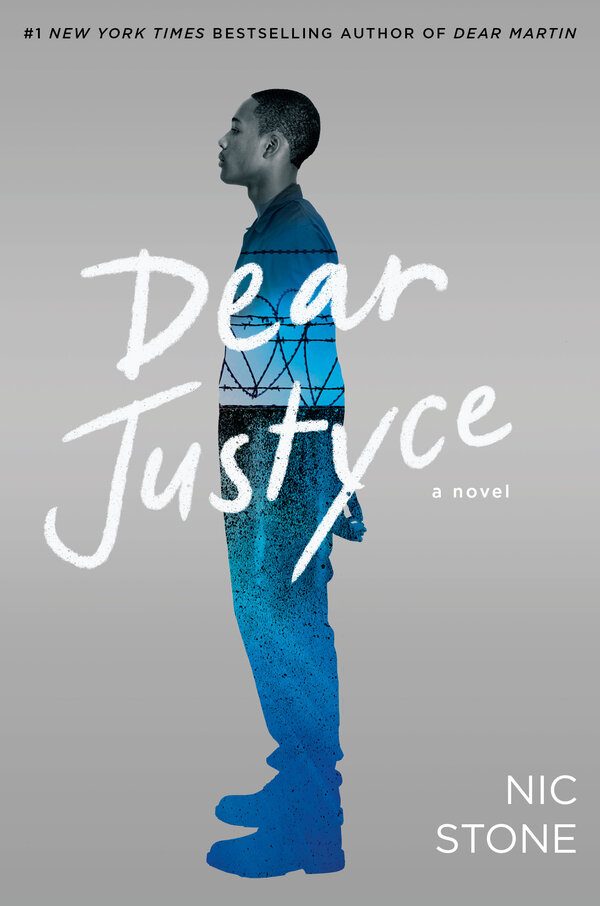 In Stone’s 2017 book “Dear Martin,” Justyce McAllister, a Black student attending a fancy boarding school, writes letters to Martin Luther King Jr. as a diarylike way to process the mixed and often heartbreaking results of his attempts to put Dr. King’s words into practice. After it was published, Stone heard from a pair of readers who hoped in her next novel she’d write about people “not like Justyce”: “We don’t go to good colleges. … Honestly, we don’t even know if we’ll live past the age of 18.”

This time Justyce is the recipient, of actual letters, from Vernell LaQuan Banks Jr. (“Quan” for short), a Black teenager incarcerated after being accused of killing a police officer.

The story spools back to the first meeting of the two academically gifted elementary school students who live only a block apart, taking temporary refuge in a playground rocket ship.

In Quan’s teenage years, the chaos of his home life and the weight of the racism he faces at his school overwhelm him and the younger half siblings in his care. With his father in prison and his mother too traumatized by an abusive boyfriend to give Quan much guidance, he seeks attention through gang life — which leads to the shooting.

From the detention center, he makes contact again with Justyce, who has matriculated at Yale and left Quan his “Dear Martin” letters.

As the legal case against Quan proceeds, Stone’s short chapters peppered with play-script-style dialogue ramp up the pace, like a thriller. But ultimately, this raw, urgent illumination of our broken juvenile justice system is a touching tale of family and friendship.

Even if you’re not one for “war stories,” you’ll likely get caught up in the breathless thrill-ride of Wein’s newest World War II novel.

Like “Dear Justyce,” “The Enigma Game” includes characters from the author’s previous books — it takes place between the events of “The Pearl Thief” and “Code Name Verity” — but stands on its own.

Jamie Beaufort-Stuart, a British flying ace; Ellen McEwen, a volunteer transport driver; and Louisa Adair, a 15-year-old half-Jamaican English orphan hired sight unseen (because of her proper British accent) to care for the elderly Frau von Arnim, a newly released German P.O.W., converge at a pub near a Royal Air Force base in Windyedge, Scotland, at the same time that a mysterious German plane lands on the base. The pilot billets at the pub, keeps everyone at bay with a pistol and flies away, leaving clues that lead Louisa to a hidden code-breaking device — the Enigma machine — which, with Frau von Arnim’s translating help, may turn the tide of the war.

At more than 400 pages, this novel looks intimidating, but its twisty plot, multivoiced narration and poetic prose make it fly by. It’s an illuminating historical read and a realistic depiction of the costs of war. It also highlights the contributions of women like Ellen, who turns out to be a Scottish Traveler, a despised minority. War, whose necessities often provide opportunities for women, allows Ellen to be seen first and foremost as a British subject, whereas Louisa, despite the perfect British accent, is inevitably and unfairly judged by her race. An author’s note details the interplay of fact and fiction, and divulges the real-life inspirations for the character of Louisa.

The author of “Frankly in Love” introduces readers to Sunny Dae, a self-proclaimed Dungeons & Dragons nerd who needs to impress the beautiful new girl, Cirrus Soh, right now. When her Korean parents make a social call on his Korean parents, what can he do but go along with her assumption that his cool older brother’s abandoned metalhead bedroom is his? Soon he’s wearing his brother’s clothes to school. When Sunny pretends he’s in a band, Cirrus becomes the fake group’s No. 1 fan. Sunny then has to rope in his D & D friends Milo and Jamal to extend the charade, going so far as to start an actual fake band.

The fun of this engrossing read (I found myself laughing out loud and admiring Yoon’s wordplay) is that underneath the slapstick lies a finely nuanced meditation on how we perform as ourselves. The real surprise is how many of our perceived shortcomings are part of a self-imposed narrative. Sunny has spent so much of his life idolizing his brother, it’s unfathomable to him that this now-grown man could envy the loyalty of his D & D brothers in arms, or that Cirrus might like him without a concrete reason, or that the big football player bully might want to play D & D himself.

The fake band eventually gets drafted into a high-profile talent show. During the performance, Sunny finds he likes the headiness of hero worship and understands how his brother feels, while it becomes harder to differentiate his real and fake selves. Through romance and failed romance, passion projects and fake passion projects, Sunny and the people around him learn that being true to yourself, once you figure out what the heck that is, is the most important thing of all.

The Iranian-American teenager Amir Azadi is new to his school and knows he is gay. He just needs to make it through his senior year, get into a good college and figure out how to eventually come out to his parents, who are dreaming of a future for him that includes a wife and children. His year starts promisingly, with an unexpected clandestine relationship with a handsome football player who also isn’t out. But soon Amir is being blackmailed by bullies and gets rejected by his top-choice schools.

Ahmadi (“Girl Gone Viral”) opens the novel in Interrogation Room 37 of an international airport, where Amir and his family have been pulled off a flight for causing an “incident.” “Memento”-like, the narrative moves backward in time to show us how they got there — from the perspectives of Amir, his father, his mother and his sister as they’re questioned by Customs and Border Protection officers. We learn that when Amir couldn’t quite scrape up enough money to pay the blackmail he panicked about being outed at graduation, took the cash he had made (from editing Wikipedia pages) and randomly flew to New York, then Rome, where he envisioned a freer life. To his family, he was a missing person. When they found him and tried to bring him back, repressed emotions kindled by Islamophobia led to an explosion.

Ahmadi portrays the treatment of sexual desire in various cultures with frank and often funny insight. And Amir is an immediately likable character with whom we empathize. He shows us how lies lead to more lies, how not being honest with oneself and others causes the dread and guilt to grow until they erupt. I could not put this book down.