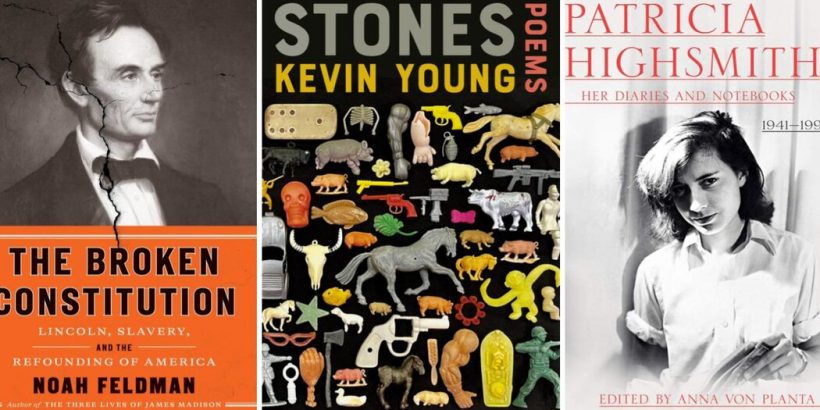 History anchors many of this week’s recommended titles — whether it’s the literary history behind the making of “Crime and Punishment” and Patricia Highsmith’s diaries, or the constitutional history of Abraham Lincoln’s approach to ending slavery, or the living history of monuments to the past and how we deal with them as attitudes and societies change over time. There’s family history, in Kevin Young’s poetry collection “Stones,” and historical fiction, in Abir Mukherjee’s crime novel “The Shadows of Men,” set in Raj-era Calcutta. In more contemporary matters, we also recommend John McWhorter’s take on “woke” culture, Farah Stockman’s look at the human costs of industrial decline and the conclusion to Alice Hoffman’s Practical Magic series, about a family of witches.

PATRICIA HIGHSMITH: Her Diaries and Notebooks, 1941-1995, edited by Anna von Planta. (Liveright, $39.95.) In these personal writings, the author of “Strangers on a Train,” the Ripley series and many other novels mediates between her intense appetite for work and her need to lose herself in art, gin, music and warm bodies. “The whole book is excellent,” our critic Dwight Garner writes. “Highsmith is pointed and dry about herself and everything else. But the early chapters are special. They comprise one of the most observant and ecstatic accounts I’ve read — and it’s a crowded field! — about being young and alive in New York City.”

THE SINNER AND THE SAINT: Dostoevsky and the Gentleman Murderer Who Inspired a Masterpiece, by Kevin Birmingham. (Penguin Press, $30.) This book tells the story behind “Crime and Punishment,” a work of literary innovation whose publication marked a turning point for both Dostoyevsky and the history of the novel. Part of Birmingham’s project is to give proper due to the inspiration provided by the 1835 trial of the “poet-murderer” Pierre-François Lacenaire, which Dostoyevsky learned about in 1861. “But where Lacenaire was cool, unflappable and languid,” our critic Jennifer Szalai writes, Dostoyevsky’s Raskolnikov is “feverish, tormented and confused, torn between ideas and impulses.”