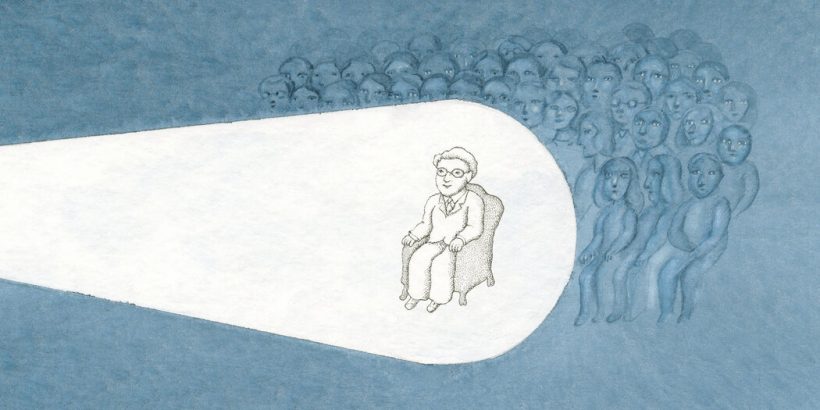 “I was always looking up to the celebrated adventurers, explorers, inventors and dreamers. But I had not paid enough attention to the reluctant and quiet heroes,” Peter Sís writes. In 2009, while visiting Prague’s National Museum, he stumbled upon the 100th-birthday celebration for the man who was sometimes called the “British Schindler,” Nicholas Winton. “Here was a man who would see something wrong and do something to correct it, but who never claimed to be a hero.”

Winton was a 29-year-old British stockbroker (whose German Jewish parents had emigrated to England and converted to Christianity) when he ditched his December 1938 ski vacation to join a friend doing aid work in Prague. There he found 250,000 refugees, mostly Jewish, who’d fled the Nazi annexation of Sudetenland, a western region of Czechoslovakia. With World War II looming, parents were desperate to get their children to safety. England would accept refugees under 17 if families could be found to foster them and travel could be arranged, including funds for a return ticket. Winton realized there wasn’t time to wade through the official channels’ cumbersome requirements, so he took matters into his own hands. By the end of the following summer, thanks to “an Englishman” whose name they would not know for decades, 669 children, ages 3 and up, had been safely transported to London.

This is the adult synopsis of what happened — a perfect subject for a black-and-white newspaper article or a “60 Minutes” segment (which it was). But how to capture the child’s-eye view?

Enter the incomparable Sís, who grew up behind the Iron Curtain in Czechoslovakia before coming to America in 1982. “Nicky & Vera,” his captivating new picture book, alternates between quiet, gray-blue, meticulously stippled sections devoted to the humble, reserved Nicholas Winton (Nicky to family and friends) — who never told anyone what he did — and more colorful watercolor pages describing the life of one of the children he saved, Veruska (Vera) Diamantova (known by her married name, Vera Gissing).

The story unfolds on parallel tracks, beginning, for both Nicky and Vera — an unusual and exquisite narrative choice — in childhood. Born into different worlds, they intersect briefly at one crucial moment in time, then split apart before coming together again at the end.

Sís draws young Nicky as a fencer suited up like the figurative and literal knight he would become, and sets him inside an oval ring — a familiar Síssian motif. But once Nicky goes into business and puts away childish things, Sís depicts him in a square, which expands into a rectangle as he sets about the humanitarian work whose fruits he won’t see until 50 years later, when he’s encircled once again, this time by the children who, thanks to him, were able to grow up and have children of their own.

Sís takes great care, in this Holocaust tale about the horrific consequences of demonizing people who are different, to highlight the things we have in common.

Well-off Nicky grows up in London and learns how to ride a motorcycle, drive a car, fly a plane. Vera grows up in a small country town outside Prague, her parents’ business done by horse and cart. But they share a love of animals: Nicky raises pigeons, perhaps to outdo his boarding school friends, whom Sís draws walking all manner of absurd pets on leashes (a skunk, a pig, a rabbit, a snake). Vera is “the Queen of Cats,” adopting strays whenever she finds one.

Even before they meet, they make cameo appearances on each other’s pages. A watercolor bubble of a girl holding a cat pops up on a stark map of Nicky’s tour of banks across Europe, where we watch him say hello in English, French and German. A dotted line runs like an umbilical cord from Vera’s bright circle (the girl he doesn’t yet know he will save) to a more muted and subdued Nicky, sitting in an armchair and taking a call from a friend: “‘Come to Prague,’ he said.”

Conversely, a tiny pen-and-ink fellow holding skis shows up on a hill of snowy moguls plunked into nearby Prague as refugees from Sudetenland stream past Vera’s school and house in her subtly darkened watercolor town. 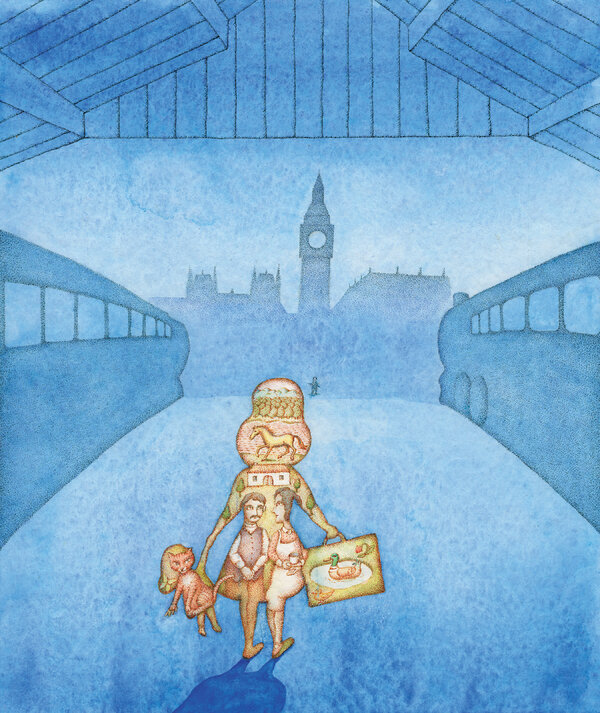 In June 1939, carrying the diary her father has instructed her to keep and trying not to cry, Vera gets on a train with 75 other children. As they tell one another stories about the lives they’ve left behind and wonder where they’re headed, we open up Sís’ breathtaking center art: A long miniature train winding through a royal-blue sky filled with twinkling constellations unspools the children’s dreams of past and future, and recalls one of Sís’ three Caldecott Honor books, “Starry Messenger: Galileo Galilei.”

“My books are mostly about leaving home,” Sís once said in an interview. “Everyone leaves home one way or another. I am unique in my field because I was born in Czechoslovakia, which doesn’t exist anymore.”

Upon her return to her country when the war is over, Vera finds only her aunt and a daughter of one of her cats, who had been adopted by a neighbor. The rest of her family has died. Four years later, she travels back to England, marries and raises three children. “Her book, ‘Pearls of Childhood’ — based on her diaries — and the many interviews she has given,” Sís writes in his author’s note, “are the inspiration for the story told in these pages.”

Vera was on the seventh of eight trains to transport “Winton’s children” from Prague to London, along with her older sister, Eva, though she’s not included in Sís’ story. (A ninth train carrying another 250 children, including Vera’s cousins, was to depart on Sept. 1 but did not leave the station. Germany had invaded Poland and the borders were closed. Only two of the children on that final train are believed to have survived the war.)

The children Winton saved settled all over the globe, and had children, grandchildren and great-grandchildren (6,000 descendants had already been identified by the time he died in 2015 at 106). Many became “celebrated adventurers, explorers, inventors and dreamers,” like the subjects of Sís’ earlier books (Darwin, Columbus, Galileo, Saint-Exupéry). Perhaps some others became “quiet heroes.” We could use a few more of those.

Jennifer Krauss is the children’s books editor of the Book Review.