It begins with a house by the sea — not in the Hebrides, as in Virginia Woolf’s “To the Lighthouse,” or Cornwall, as in Woolf’s childhood, but in the small town of Tiverton on the Rhode Island coast, where Katharine Smyth’s parents bought a tumbledown weekend house when she was 5. Her parents, both architects, draw up renovation plans, and, as she writes in her memoir, “All the Lives We Ever Lived,” she learns early that proximity to the sea has a way of both distilling time into postcard moments and speeding up our perception of its effects: “We learned quickly how bleached things become in a house on the water, how exhaustively salt and light leach color, leaving behind pale blues and yellows. The spines of books, the cork-tiled floors, the rugs and prints and bed linens — each became a cheerfully bloodless version of itself.”

This portrayal of entropy gently echoes “Time Passes,” the hallmark section of “To the Lighthouse” in which a decade’s worth of dramatic plot points involving the Ramsay family are narrated against the backdrop of their Hebrides house’s descent through neglect into near-ruin. And it gives us a clue as to the terrain of “All the Lives We Ever Lived,” that it will range over the foundational memories of childhood, the heightened attachments and grave disappointments of family, the death of a beloved parent and the quest to create out of all those elements a work of art that survives.

Smyth opens her memoir with a preface that states her case for “To the Lighthouse” as the through line for her life, the “story of everything,” the one among all the stories out there that resonates most deeply with her psyche, even if it does not conform to the literal contours of her family. (She is an only child, compared with the Ramsays’ brood of eight, and the hero worship those Ramsay children direct toward their mother she bestows on her father.) Woolf’s fictional portrait of parental adoration and loss speaks profoundly to her from the moment she first encounters the novel, and she dives headfirst into the complete oeuvre, with productive results: Smyth has, her Oxford University tutor tells her during a junior year abroad, “an intuitive sense of Woolf.” 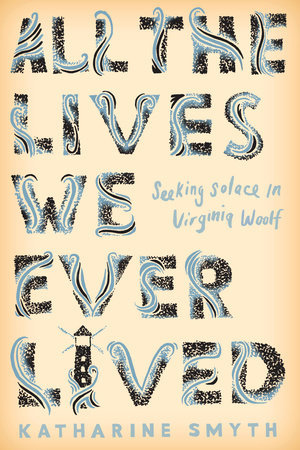 And so, Woolf threads through her memoir as a conduit between scenes or emotions. A reference to “To the Lighthouse” gives way to a brief analysis of the passage, then the link to Woolf’s own biography and then Smyth’s reading of the novel and the ways it connects to her own life and memories. But it’s hard to relegate a writer as formidable as Woolf to connective tissue, nor would it be fair to ask a debut author to measure up to her mature style. The lighthouse casts too large a shadow.

As a compulsive rereader, I understand the impulse behind Smyth’s subtitle, “Seeking Solace in Virginia Woolf.” Beloved novels do function as comfort food, even novels as profoundly unsettling as “To the Lighthouse,” in the middle of which Woolf dispatches death by illness, childbirth and war in consecutive cruel parenthetical passages. We go back to our chosen fictional touchstones time and again, as constants against which to cast our variables. And yet, there is something diminishing about citing great works of literature as emotional support vessels — diminishing not only to the great work but to the new one.

Smyth’s memoir is most absorbing when it is absorbed in her own life, especially in her portrait of her father, whose alcoholism creeps deftly into the narrative, first as a benign part of the scenery (the glass of wine, refilled on repeat), then as an open secret that his daughter works desperately hard to manage, and, finally, as a destructive and self-destructive tragedy. As Smyth grapples with the illness and decline of the man she had thought of as godlike, she excavates the foundation of her parents’ marriage, their relationship with each other and her relationship with each of them. Her prose is so fluid and clear throughout that it’s not surprising to observe her view of her family, its cracks and fissures, sharpen into unsparing focus.

The truth is, I didn’t retain much of Smyth’s commentary on Woolf. It is insightful and reverent, but not revelatory, at least not to someone who has studied her work. I do remember the way Smyth describes the cast of the Tiverton light on the water and how her father pounds the table one hostile night, breaking a plate and cutting his hand to the bone. I remember the false hope of his miraculous recovery at the hospital on the afternoon Katharine is called in to say goodbye. She is the only one who can arrange his pillows just the way he likes them. She faithfully records the incoherent dialogue of his hallucinatory dreams. Her exploration of grown-up love, the kind that accounts for who the loved one actually is, not who you want him or her to be, gains power and grace as her story unfolds. I suspect her book could itself become solace for people navigating their way through the complexities of grief for their fallen idols. And they will be lucky to have it.

Radhika Jones is editor in chief of Vanity Fair.

ALL THE LIVES WE EVER LIVED
Seeking Solace in Virginia Woolf
By Katharine Smyth
308 pp. Crown. $26.