“An Orchestra of Minorities,” a new novel by the Nigerian writer Chigozie Obioma, follows his excellent debut, “The Fishermen.” That novel — a Cain and Abel-like story about four brothers who learn of a prophecy foretelling that one will murder the oldest — was a tour de force, an unexpected take on a familiar story.

“An Orchestra of Minorities” is more expansive in form, broader in reach. Based partly on a true story, partly on Homer’s “Odyssey,” it follows the obsessive descent of a young poultry farmer called Chinonso, whose life is interrupted when he stops a young woman from jumping to her death. A romance is born.

The woman, Ndali, is very different from Chinonso: urban, sophisticated, educated, with plans to obtain a pharmacy degree in England. But this is modern Nigeria, and Ndali’s family is one of the richest and most prominent in the country; Chinonso suffers a barrage of indignities in courting her. At one point, Ndali’s brother forces him to act as valet at a party to which he was invited as a guest. The shame is bracing.

Such cruelty propels Chinonso to change his life: He will make himself worthy of Ndali. He sells his ancestral property to study abroad, at a university in Cyprus. When a childhood friend offers to help by making arrangements with the school and traveling ahead with Chinonso’s savings, his nightmare begins.

This is not a love story. Rather, this is a story about class, and male rage, and the strangling of opportunity. Chinonso’s obsession with Ndali is violent, disturbing and, at times, downright odd. He calls her “Mommy,” the way other men might refer to a lover as “sweetheart” or “darling.” “Every good woman is my mommy,” he says. And elsewhere: “He’d leaned his head against the wall, her tears running down his shoulder to his chest, and said it was for the best. ‘Mommy, believe in me.’ … He’d held her, his heart beating, planted his mouth on hers and sucked at it as if it were a flute until she, shuddering, said nothing more.”

Ndali’s ease with this term of endearment is surprising. In fact, it is never entirely clear what she sees in Chinonso, for all his possessiveness and self-absorption. He is coarse, ill informed, not much for conversation. He expresses little interest in her as a person, in her achievements or opinions: She is “the glittering, priceless article in a store full of precious artifacts.” One of his main worries about leaving her for Cyprus is that she will be “exposed to the prying eyes of other men.”

She, in turn, laughingly calls him “Village Boy” and “Bushman.” The two spend some lovely sun-drenched afternoons together, teasing each other over their differences. And maybe this is the point — maybe the very fact that he is so bluntly from another world is what appeals. Perhaps, for her, it is a love born of rebellion. 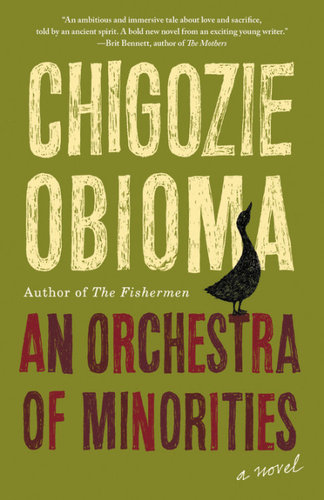 When Chinonso tells her of the many beloved birds he has killed, often cruelly, she replies: “If you didn’t love them, you would not have acted this way.” And seemingly, with this unsettling remark, the link between love and violence is justified. It does not bode well for Ndali’s fate.

None of this is as straightforward as it sounds. Chinonso is a cipher. His story is told not by him, but in the voice of his chi: the Igbo guardian spirit who inhabits him. The chi is not a guiding presence, but a witness to, and chronicler of, Chinonso’s actions.

It’s a unique narrative device. The chi is wise and all-knowing, and has lived through many eras inside many bodies, which gives it the ability to connect the historical past with the setbacks in Chinonso’s life. The chi remembers the era of the Aro slave raiders; it remembers the horrors of the Biafran War. These dips into history are quite wonderful — they anchor the story within a broader cultural context, marking this tragedy as one of many in the grand and inevitable flow of time.

But there is also a risk to this narrative strategy. Establishing intimacy between a reader and a character can already be a delicate dance, and in this case the use of the chi clouds that relationship by creating an enormous psychic distance, limiting any deep understanding of Chinonso beyond the chi’s analysis. Though the chi can negotiate with the gods on Chinonso’s behalf, it can’t interfere in his daily actions, and so lacks all immediate power of influence. Chinonso is therefore left the victim of his impulses. His emotions can sometimes be hard to connect with when filtered through the distant lens of the chi. This is a story, then, in which the events take place behind a veil, and the intensity of passion is dimmed.

An Odysseus-Penelope paradigm is established between the lovers: Chinonso’s delayed journey back to his beloved; Ndali’s interminable wait for his return. And yet, in many ways, the novel seems to reject its epic trappings. Despite the frame of the chi pleading Chinonso’s case to the higher gods, and despite the novel’s spanning many landscapes — from rural Nigeria to Lagos, from the churches of Turkey’s countryside to its tangled urban streets — its fixation remains the repressed, claustrophobic, paranoid psyche of its broken narrator.

Ultimately, the novel’s tension rests on the clash between Ndali’s modern, newly awakened sense of agency over her romantic choices, and Chinonso’s persistently naïve, unchanged ideas of romantic ownership. Sadly, it’s his vision that will win out.

The novel comes alive in those moments when it captures the alienation of foreigners in strange lands. Even a simple meal can cause astonishment: In Cyprus “the people placed a premium on the need for things to be eaten in their raw states, once they had been washed. Onions? Yes, simply cut them up and add them to your food. … Cooking is a time-wasting experience.” When Chinonso enters a Turkish police station, he’s stunned at the orderliness; likewise, the silence of a city bus unnerves him. He is shocked to be told that he can’t drink alcohol in a taxi. A group of boys mistakes him for a famous soccer player, presumably because of his skin color.

Obioma is especially good at exposing such instances of casual racism. In a city park, Chinonso sits down beside a Turkish couple on a bench, and they swiftly get up and leave. There is a striking scene in which Chinonso and a friend are approached by two Turkish girls asking to touch their Afros. Later, when Chinonso sees a very dark-skinned Nigerian man who has become a taunted public spectacle, he shudders at the idea of becoming like him.

The “orchestra of minorities” refers to the crying of birds mourning the slaughtered among them. It extends, symbolically, to the broader human community of the poor, the dispirited, the silenced, the plundered — those whose spirits have been savaged, those who have been stripped of all dignity, those who risk everything or make impossible journeys to better their lives. It’s a story as old as the epic, but, sadly, an all too modern one.

Esi Edugyan is the author of “Half-Blood Blues” and “Washington Black.”

Little Britain will be making a major TV comeback after 12 years — but will it fall foul of PC killjoys? – The Sun