THE HEARTBEAT OF WOUNDED KNEE
Native America From 1890 to the Present
By David Treuer
Illustrated. 512 pp. Riverhead Books. $28.

Over the past 12 months, Native American politicians, artists and academics have made uncommon gains. Indeed, Native American women helped to make 2018 the Year of the Woman. In November, New Mexican and Kansan voters elected Debra Haaland (Laguna Pueblo) and Sharice Davids (Ho-Chunk) to Congress, while voters in Minnesota elected Peggy Flanagan (Ojibwe) their lieutenant governor. In October, the sociologist Rebecca Sandefur (Chickasaw) and the poet Natalie Diaz (Mojave) won MacArthur Foundation Awards, while throughout the spring and summer, the playwrights Mary Kathryn Nagle (Cherokee), Larissa FastHorse (Lakota) and DeLanna Studi (Cherokee) had historic openings at Arena Stage in Washington, D.C., Artists Repertory Theater in Portland, Ore., and Portland Center Stage, respectively. From the cover of American Theater magazine in April to CNN on election night, the work of these eight dynamic Native women garnered national acclaim.

Such achievements represent more than added texture to the mosaic of modern America. They underscore the rising power of American Indians over the past two generations. During an era known as “Self-Determination,” Indian tribes and their citizens have changed not only their particular nations but also the larger nation around them. Though still poorly understood, this era emerged from urban and reservation activism in the 1960s and ’70s, when community leaders, students and veterans, among others, challenged onerous policies that had aimed to assimilate tribal communities. The Self-Determination Era has now grown in prodigious ways and yielded countless examples of achievement across Native North America, including the elections of Haaland and Davids as the first American Indian women ever elected to Congress.

“The Heartbeat of Wounded Knee,” by David Treuer (Ojibwe), examines these recent generations of American Indian history. Through memoir, interviews and extensive reading, Treuer counters the familiar narratives of invisibility that have so readily frozen America’s indigenous peoples. Interweaving stories from family members, the voices of policymakers and assessments of contemporary youth culture, the book introduces alternative visions of American history. The result is an informed, moving and kaleidoscopic portrait of “Indian survival, resilience, adaptability, pride and place in modern life.” Rarely has a single volume in Native American history attempted such comprehensiveness. 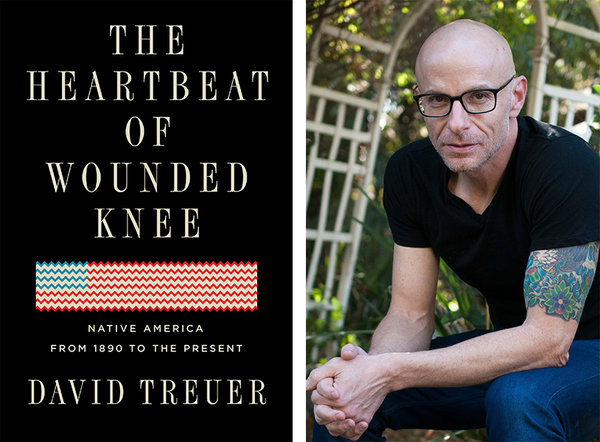 A noted novelist, Treuer takes his title from the celebrated work “Bury My Heart at Wounded Knee,” by Dee Brown. Published in 1970 at the height of the activist movements, Brown’s reassessment of the 19th-century wars between Indians and the federal government resonated with a generation of Americans. Achieving its narrative crescendo with the Wounded Knee Massacre of 1890, when the Seventh Cavalry was said to have exacted revenge for Custer’s defeat at the Little Big Horn, Brown’s text fueled growing outrage against injustices perpetuated by the federal government. It was a history that reached beyond its subject and helped to define an era. It has remained in print ever since.

To many, Brown’s history inverted accounts of the American West. It substituted Euro-American quests for frontier freedom with those of American Indians “who already had it.” The problem was that in place of Indian vilification Brown offered victimization. Despite their nobility and fortitude, he suggested, Indians were still defeated. In his telling, Native history became a slow, inexorable decline toward disappearance. Twentieth-century “poverty, hopelessness and squalor,” he wrote, were the outcomes for peoples who had lost and who remained lost.

White Americans have long defined the past through narratives of frontier freedoms. Recently, however, historians have moved away from such self-justifying accounts, and a growing field has made the experiences of indigenous displacement, survival and resurgence a new pathway for understanding the nation’s history. Celebratory accounts of European settlement and expansion have increasingly passed into an antiquarian realm, succeeded by studies of settler colonialism that approach the past more comparatively as well as more cautiously.

Treuer adeptly synthesizes these recent studies and fashions them with personal, familial and biographic vignettes. He works hard to connect the past with those who live with its ongoing legacies. An extended account of his cousin’s history of reservation cage-fighting on their home at Leech Lake, Minn., for example, effectively introduces Part 3 of the book, “Fighting Life: 1914-1945,” which chronicles the astonishing rates of Indian service in World Wars I and II.

Here, Treuer recalls heroes less familiar than the Indians of traditional histories. Joseph Oklahombi of the Choctaw Nation received both the American Silver Star and the French Croix de Guerre during World War I for capturing a German machine-gun nest and “killing 79 before taking another 171 captive.” He was, however, never “recommended for the Medal of Honor” — which, as Treuer notes cuttingly, had been awarded to “20 of the troopers who opened fire on unarmed Lakota at Wounded Knee.” Even before the United States joined the war in 1917, some Indian men had migrated into Canada and joined other Native Americans, like Francis Pegahmagabow (Ojibwe) from Wasauksing First Nation, whose service at Ypres, the Somme and Passchendaele included “378 confirmed kills and the capture of 300 Germans.” These achievements made him “the most decorated soldier (and certainly the most effective) in the Canadian Army.”

The portraits of such early-20th-century individuals follow Treuer’s survey of colonial and 19th-century history, where regional overviews of Native North America are combined with the complex, multi-imperial histories that forged colonial America and the young Republic. Readers will find familiar analyses of the unrelenting, violent cupidity of European explorers and, at times, subtle suggestions about the equally relentless capacity of Indian communities adapting within the maelstrom of early America.

Through the book’s second half, recounting developments since World War II, Treuer’s counternarrative to Brown takes its fullest form. In particular, his detailed assessments of what he calls “becoming Indian” highlight the resiliency and dynamism of contemporary tribal communities. Interrelated processes rooted in family and culture, he suggests, undergird the continuing sovereignty of modern Indian tribes. Such processes, he shows, are in fact ubiquitous. They are also deeply personal. For instance, as he concludes about his mother’s adjuration to maintain his family’s methods of ricing, hunting, sugaring and berry harvesting, “sovereignty isn’t only a legal attitude or a political reality.” Sovereignty is lived. It is inhabited, performed and enacted, often on a daily basis. It can also become as empowering as it is cherished: “To believe in sovereignty,” Treuer writes, “to move through the world imbued with the dignity of that reality, is to resolve one of the major contradictions of modern Indian life: It is to find a way to be Indian and modern simultaneously.” As the political theorist Glen Coulthard (Yellowknives Dene) similarly suggests, culturally specific, place-based relationships root Native peoples not only with their homelands but also with ethical obligations and a moral worldview that he terms “grounded normativity.”

Family, relationships and place-based sovereignty are a major feature of contemporary Native America, whose collective “heartbeat” has grown stronger throughout the Self-Determination Era. The legacies of conquest, however, continue, and Indian communities still endure beleaguering disparities. They also continue to confront legal and political challenges, as well as threats of violence. Treuer writes that in recent years the United States Supreme Court has been “shaped by the questions of community and obligation between the government and several Indian nations.” But he might have noted as well that since 1978 the court has fashioned a “common law colonialism” that chips away at the ability of tribal courts to enforce criminal and civil laws against non-Indians, while environmental degradation and the extraction of resources plague Indian communities disproportionately.

Increasingly, colonial battles have moved from Wounded Knee to Congress, where Native communities have, at times, been victorious. “In 2013, the Violence Against Women Act (VAWA),” Treuer writes, “was reauthorized and significantly revised. Among the new provisions was the empowerment of tribal courts to charge and prosecute non-Natives who raped or assaulted Native women on Native land.”

Threats to tribal sovereignty, however, loom. Shortly after the VAWA reauthorization, Dollar General Corporation took a case to the Supreme Court contesting tribal authority over civil affairs. In 2016 it nearly won with a court that divided 4 to 4. Legal challenges like this one have become among the 21st century’s primary landscapes of confrontation.

Ultimately, Treuer’s powerful book suggests the need for soul-searching about the meanings of American history and the stories we tell ourselves about this nation’s past. There is an urgency to fashion new national narratives. Treuer’s suggestion, for example, that Indian peoples have been infected by colonialism with a disease “of powerlessness … more potent than most people imagine” could be extended to include the subordination experienced by other gendered, racialized and historically disempowered communities. This disease also has the potential to spread even further, because it cannot simply be up to America’s indigenous people to ward it off. As Treuer explains, “This disease is the story told about us and the one we so often tell about ourselves.”

Ned Blackhawk (Western Shoshone) is a professor of history and American studies at Yale University, where he coordinates the Yale Group for the Study of Native America.