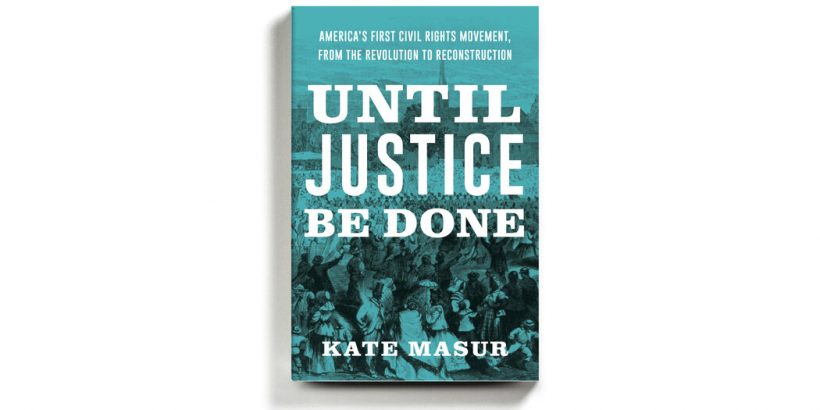 Beyond the literal meaning of “states’ rights,” the phrase has also been understood as a racist dog whistle — one that was readily deployed by segregationists during the 1950s and ’60s as a blunt rebuke to the civil rights movement. The States’ Rights Party was even the name for the coterie of Dixiecrats who seceded from the Democratic Party in 1948 in a huff.

But as Kate Masur explains in her revelatory new book, “Until Justice Be Done,” there was another civil rights movement that took place a century before. During this “first civil rights movement” — the fight for Black people’s freedom and equality from the Revolutionary War to Reconstruction — states’ rights were mostly what antislavery activists had to work with. After all, the early decades of the republic were a time when the federal government was relatively weak: “What did advocating for African-American belonging and racial equality look like in a decentralized nation, where local and state law had the greatest influence on everyone’s daily lives?”

It looked like a lot of determined, painstaking work. The unrelenting violence of chattel slavery meant that abolition is a crucial part of the story Masur tells, but until the cataclysm of the Civil War and the Reconstruction amendments that followed, the state level was “where most individual rights were defined and enforced.” While the slaveholding class dictated the politics of the South, the so-called free states weren’t necessarily free in any capacious sense; a number of those states, in particular the ones bordering the South, enacted legislation to discourage the migration of Black people.

So activists did what they could, adapting their tactics to the constitutional order while also reminding Americans that they were failing to live up to the soaring exhortations in the Declaration of Independence. But the United States Constitution proved to be a trickier document. On the one hand, it didn’t mention the words “slavery” or “slave”; on the other, it contained proslavery provisions like the three-fifths compromise and the fugitive slave clause. Masur details how the prevailing view of the Constitution held that it was designed to limit the power of the federal government, leaving the states to do as they saw fit to maintain security and order. It was a dispensation that privileged “community well-being,” however defined, over individual liberty.

A number of recently published books have explored the pursuit of liberty and equality during the antebellum era. William G. Thomas III’s “A Question of Freedom” recalls the enslaved people who tried to escape bondage by taking to the courts. Van Gosse’s “The First Reconstruction” examines the influence that free Black men had on electoral politics in the North. In “The Crooked Path to Abolition,” James Oakes recounts how antislavery Northerners, including Lincoln, insisted that the Constitution was ultimately on their side.

Masur, a historian at Northwestern whose first book was about Reconstruction in the nation’s capital, shows in “Until Justice Be Done” how the District of Columbia was a place of particular contention before the Civil War. It was a center for slavery and the slave trade; it was also a hub for abolitionists, who argued that Congress should use its constitutionally mandated authority over the District to end slavery there.

As in other slaveholding jurisdictions, Black people traveling to the District without an enslaver were assumed to be runaway slaves, subject to questioning not only by local officials but by suspicious members of the public. Masur tells the story of Gilbert Horton, a freeborn New Yorker who traveled to Washington in the summer of 1826 and was thrown in jail. Horton’s friends and family in his home state happened to see a notice in a local Washington paper indicating that he would be sold into slavery if no one came forward; they were then able to get the governor of New York, DeWitt Clinton, to send a letter to President John Quincy Adams saying that the law under which Horton was incarcerated was “void and unconstitutional in its application to a citizen.”

Clinton was using the privileges and immunities clause of the Constitution — which in principle allowed citizens of one jurisdiction to move unimpeded to another — to argue that Washington was violating Horton’s rights as a citizen of New York State. Horton regained his freedom later that summer, and this question of citizenship would be crucial for Black Americans, as would the question of what citizenship entailed.

The states’ rights argument imbued local officials with extraordinary authority; in the free state of Ohio, laws proscribing the settlement and mobility of Black Americans were presented as a matter of Ohio simply exercising its “police power.” But as the case of Horton demonstrated, states’ rights could also be invoked as a form of protection — sometimes, that is. Not every Black American could secure a letter from a state governor to the president of the United States; and such arguments didn’t always work.

There are several themes that emerge in this excellent book. The first has to do with how African-Americans led the struggle Masur describes, even as racially discriminatory laws made them vulnerable — whether to the whims of local officials exerting their discretion or to white mobs seeking legal cover for anti-Black violence. Another concerns how the language of race and class was, as Masur puts it, “fungible”: Even after the Civil War, legislation cracking down on “vagrancy” and “vagabondage” allowed state legislatures in the former Confederacy to practice discrimination under cover of laws that seemed “race-neutral.”

So much in this history was contingent; so much could turn on a single word. Toward the end of her book, Masur describes the debates over the Civil Rights Act of 1866, when senators haggled over who would be protected against racial discrimination, deciding to replace the inclusive word “inhabitants” with the more restrictive “citizens.” That way, states could still discriminate against Chinese immigrants and, as one West Virginia Republican put it, “other inferior races that are now settling on our Pacific Coast.” This citizenship provision intersected with a whites-only naturalization policy that would render Chinese immigrants ineligible for naturalization until 1943.

If this is a cleareyed book, it’s still a heartening one. Masur takes care to show not only the limitations of what was achieved at each step but also how even the smallest step could lead to another. The people she writes about seized openings and opportunities where they could find them, and then they used any hard-won advances to push for more. “Changing the law was not everything,” she writes, “but it was a start.”