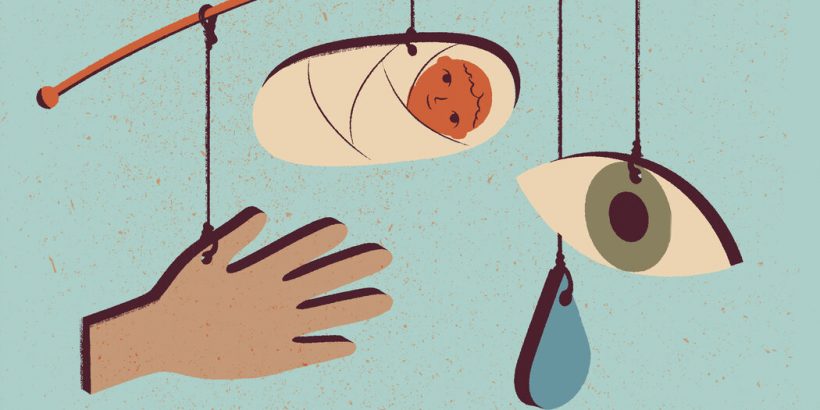 AMERICAN BABY
A Mother, a Child, and the Shadow History of Adoption
By Gabrielle Glaser

Much has been written recently about what went wrong in the adoption world between 1950 and 1975, a period known as the “Baby Scoop Era” when the number of domestic adoptions exploded to, by some estimates, nearly four million. One agency receiving particular scrutiny in the post-mortem is Louise Wise Services, a now-defunct entity that promised to match “blue-ribbon” Jewish babies with “good” Jewish homes in the aftermath of the Holocaust. The 2018 documentary “Three Identical Strangers,” about triplets deliberately separated as part of that agency’s nature-versus-nurture “research,” is the most visible example of the growing realization that old-style adoption was not always what it seemed.

“American Baby: A Mother, a Child, and the Shadow History of Adoption,” by the veteran journalist Gabrielle Glaser, is the latest addition to this body of work, and the most comprehensive and damning one. Like “Three Identical Strangers,” Glaser tells a singular story to illuminate a universal truth. There are no one-in-a-million triplets here, just a teenage girl and a baby, who could be any young mother, any infant son. In fact, Glaser argues, Margaret Erle Katz and her son David Rosenberg are every sealed, secretive adoption, and in their intimate tale are the seeds of today’s adoption practices and parenting norms, as our past continually redefines our present.

Margaret grew up in postwar Manhattan, a daughter of German parents who fled the Nazis. Her mother was a homemaker, her father a baker, and while they took pride in providing for Margaret, theirs was not an effusive household. Nor was it a transparent one. Most things were not talked about: not the comfortable lives the elder Erles left behind, not their difficulties adjusting to life in the United States, not Mrs. Erle’s breast cancer — and certainly not sex. The closest Margaret came to “the talk” was when her mother said, of boys: “Don’t let them touch you. Don’t give them the wrong idea.”

The Erles did make known their ambitions for Margaret, however. She was to grow up, marry and lead a prosperous life, reflecting well on her parents, repayment for their sacrifice and suffering.

Margaret was 15 when she met George Katz, the 16-year-old pitcher on their high school baseball team. Both sets of parents immediately disapproved, so the couple necked in parks in the summer, and by winter had use of a bedroom in a schoolmate’s apartment while that girl’s divorced mother worked.

The single time they had intercourse Margaret was not entirely sure what they’d done. She “did know, from her friends, and a few embarrassed glances at confession magazines, how babies were conceived — sort of,” Glaser writes.

Once was enough. The young couple pledged to keep their baby and marry when they reached legal age. George began to make the rounds at local arcades, using his pitching talents to win Pyrex and CorningWare for the home they would share.

In Margaret’s sixth month, her mother deposited her at Lakeview, a “maternity home” on Staten Island, owned by Louise Wise Services. For a hefty fee, the agency would keep a young woman fed and sheltered until she gave birth, then return her with reassurance that there was “no need for anyone to ever know.”

The baby she named Stephen Mark Erle was born on Dec. 17, 1961. When she rejected anesthesia because she wanted to be awake for the birth, she was placed in restraints and put into “twilight sleep.” When she came to and asked to hold the boy, she was told: “You’re one of the girls from Lakeview. You don’t get to hold your baby.”

For months the young birth parents insisted they would keep their child, who had been placed immediately in foster care. Finally, when a social worker threatened to have Margaret sent to juvenile hall, she signed the relinquishment forms without reading them.

The possibility of being declared a delinquent was very real, but nearly everything else Margaret was told was a lie. Glaser describes in powerful detail how both David’s first and second mothers were told what they wanted to hear about each other and about the baby they shared. Louise Wise would excuse it all in the interest of giving the boy — renamed David Rosenberg — the best possible life. But for the next 50 years Margaret would carry guilt about her lost son; Ephraim and Esther Rosenberg would be mystified by their adopted one; and David, constantly reassured by his adoptive mother that he was special because she “chose” him, would wonder, “What was it about him that made his birth mother not choose him?” 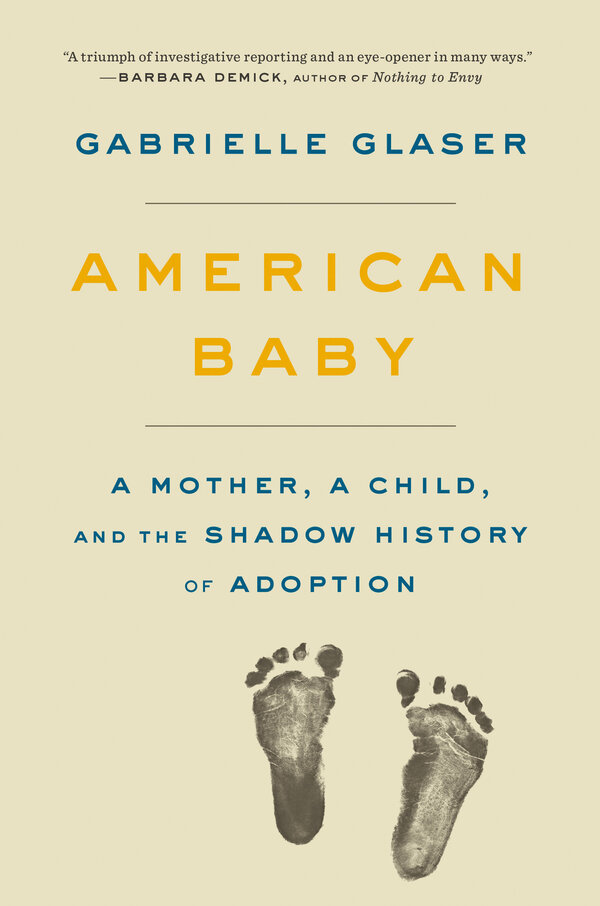 That Margaret and David find each other is not a spoiler. “I found my birth mother,” he tells Glaser on Page 5, in May of 2014. The hows of the search, and what happens next, read like a novel, one likely to bring tears.

“American Baby” is a braided tale. Margaret and George Katz are one thread (they marry and go on to have three children); David Rosenberg is another (he grows up to be a renowned cantor). The third is the world that surrounds them — the “massive experiment in social engineering” in postwar America of which they were all subjects.

“People had always had sex before marriage,” Glaser writes, “but after the war, something in the social calculus shifted.” The mix of soldiers returning with sexual experience, plus larger suburban homes in which teenagers could have more privacy, combined with the rise of automobile culture and the availability of “the back seat of the family Buick” — all at a time when birth control, sex education and abortion were taboo — led out-of-wedlock births to more than triple between 1940 and 1966.

In earlier eras, a single pregnant woman would have quickly married. But in postwar America, where the goal had become a two-car garage and the white picket fence, “surprise pregnancies were an obstacle to a better life,” one that “needed to ‘go away,’” Glaser writes. At the same time, the “frenzy of homemaking and family-building” left infertile couples ashamed.

Adoption agencies became the middleman to meet both needs. And in the rush to create perfect families — and to collect a fee for each child they placed — agencies like Louise Wise blurred what, through today’s lens, are clear ethical lines.

Not only did the agencies fail to consider “the lifelong emotional impact of women who were hidden away in shame during pregnancy, expected to lie about it ever after and then told to put their babies out of their minds,” Glaser writes, but they also failed to give much thought to “the feelings of the adoptees who were brought up to think their biological parents hadn’t wanted them, and that — regardless of how cherished they were — they were their adoptive parents’ ‘second choice’ to biological offspring.”

Worse than those omissions, however, were acts of commission: Identical twins and triplets placed in separate homes, then studied for similarities and differences. Babies born to institutionalized psychiatric patients who were placed with families not told of that fact. Singletons who spent months bouncing from one foster home to another until an “expert” could determine whether they were mixed race. (Louise Wise relied on Harry Shapiro, a forensic anthropologist at the American Museum of Natural History, to make the call.) The agency used the lag time for such studies as shooting rubber bands at the soles of tender infant feet to see if quickness to cry was linked to intelligence.

Was all of the above the result of ignorance? Defenders of the system have argued that knowledge of genetics and infant development back then was rudimentary, and that these choices were made with the best of intentions. Glaser, however, is persuasive in her argument that the actions at best ignored inconvenient evidence, and at worst acted in spite of it. For instance, as David idled in foster care, there were existing studies proving the importance of attachment and the harm of moving an infant from one foster mother to the next.

Even if one is inclined to give benefit of the doubt to early agency choices, it is harder to reconcile later ones. When David turned 20, Margaret visited the agency to update medical information — by then her husband had developed diabetes, required dialysis, and was on the list for a kidney transplant — and to leave her contact information should her son ever need it. The staff refused to let her in and even threatened to call the police. Nearly 20 years later, David too had diabetes, was on dialysis and needed a kidney transplant. The agency that had inherited his records refused to share any information.

All around them, the world was changing. Feminism, the birth control pill and Roe v. Wade gave women in Margaret’s situation a completely different set of choices. The number of babies surrendered for adoption in the United States dropped 26 percent between 1970 and 1975. The number of couples seeking to adopt fell as well, as reproductive medicine increased their ability to conceive.

The adoption rights movement gained traction, arguing that “access to one’s own birth certificate is a human and civil right.” As a result, 10 states opened previously sealed adoption files, although New York did not do so until 2019, and some of the largest — Texas, California and Florida — are still closed. In many cases the availability of government records is a moot point, as genetic testing companies make it possible for adoptees and birth parents to find one another with a swab and a membership fee.

One powerful message of “American Baby,” though, is that the shadows of the past cannot be easily dismissed as mistakes of an unenlightened moment. Today, the nearly half a million international adoptees in the United States do not have access to their birth records. And the tens of thousands of babies created from donor gametes are not legally entitled to identifying information. The American foster care system, no longer a waystation for white infants being studied, is now more likely a dead end for Black and brown babies shuttled from one home to the next. (Glaser acknowledges that the story of adoption in the 1950s and ’60s was focused on white babies and parents, and that the experience of Black families during that period “is deserving of its own detailed examination.”)

In the end one is left with a question — one Glaser does not articulate directly, but which weaves itself through every chapter of her book. What about the future?

The stories of Margaret and David and the millions of others who lived through the Baby Scoop are vivid evidence that policy and culture change the trajectory of individual lives. “Again and again,” Glaser writes of the era, “the nation’s powerful religious and political institutions collaborated to control women’s bodies and the destinies of babies.”

What decisions being made today will some future author — and readers — look back on as having had profound and unexpected consequences? What future books will be written about today’s assumptions, choices and mistakes?