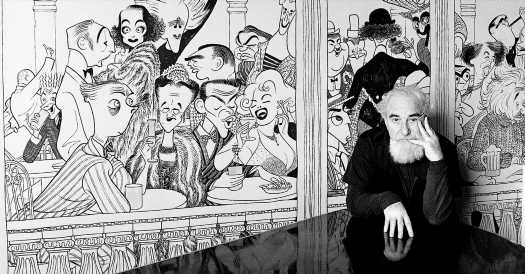 HIRSCHFELD
The Biography
By Ellen Stern

It’s impossible, unless you’re blind or a LeRoy Neiman collector, to confront a work by Al Hirschfeld (1903-2003) without sneaking one more furtive squint at the perfection of line that flowed so fluidly from his crow quill pen. Looping, swooping arabesques, bodies sinuously elongated and twisted, never a graceless line — virtually every Broadway star from Sacha Guitry, his first, to Tommy Tune, his last, is rendered in heart-stabbingly valid likenesses halfway between design and portraiture.

Eighteen years after his death, Ellen Stern has written a book simply titled “Hirschfeld,” wrapped around the art of the man widely celebrated as the greatest caricaturist of the 20th century. No small honor for an artist about as versatile as a Swiss Guard: But specialization appears to pay, in medicine, football and caricature. Hirschfeld lionized thespians almost exclusively, and so inimitably that he never heard footsteps. (The sole genius caricaturist he was not. Take the art beyond theatrical personages and there’s the late David Levine, whose dark, witty, exquisitely fine ink-line drawings make a grab.) 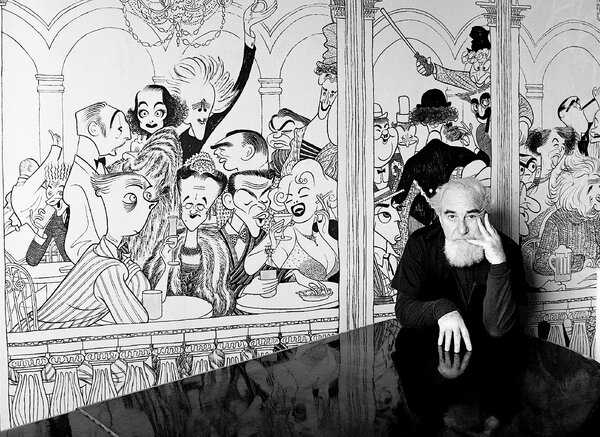 As the author recounts, Al Hirschfeld arrived in New York from his native St. Louis in 1912 as barely more than a kid who liked to draw. He liked it so much, and was so good at it, that by age 18 he was the art director for Selznick Pictures, cutting his teeth illustrating movie posters. He sold his first newspaper caricature at 21 and never looked back. Hirschfeld spent the next three-quarters of a century steadily improving his position. He died a whisker short of his 100th birthday. And used every day of it, working with such fierce dedication that the Hirschfeld oeuvre bulks out today at 10,000 drawings.

He only got more accomplished as he matured. But it’s hardly as if Hirschfeld were content to sit in that spavined old barber’s chair up in his East Side aerie, sealed off from the wider world. Much as he loved art, as Stern tells us, it wasn’t enough to forgo life’s other pleasures. For example, he takes up foreign travel as soon as he can. He’s a talented watercolorist and dreams of a serious painting career. A sympathetic uncle gives him $500 to study art abroad and he’s gone.

Paris, 1925: Hirschfeld and a couple of chums rent themselves a studio.

He revels in the fizz of ’20s Paris. All around him, expat writers and artists and musicians — the kind of people one seldom found back in St. Louis. The cost of living makes cheap seem expensive; Hirschfeld’s share of a year’s rent is $33. Then winter turns the studio into a live-in refrigerator. A brief vacation in southern climes, then back to New York, piling up assignments for the movies and the stage. So much for the painting career.

Hard, virtually nonstop work smoothed out caricatures. They lost their baby fat. He spent much of the ’30s mercilessly carving every drawing down to its purest form. He was married now and partook zealously in the Manhattan social caravansary. A brief romance with the fairy tale of Russian Communism; world travels that found him in Bali at the same time as Charlie Chaplin, kindling a fast friendship; writing a theatrical flop with S. J. Perelman, another friend: Hirschfeld’s life was as full as a Broadway show. He was still maintaining a busy pace at 90. Maybe God gave him a break: The shaky drawing hand and dulled imagination of a codger are absent.

Stern, who has written for New York magazine and GQ, doesn’t flinch from the flaws and failures behind that gruff visage and Moses beard. Hirschfeld’s first two marriages grind to ugly halts, generating much friction; his third, to the German-born actress Dolly Haas, produced his only child, Nina, whose name became a game: Find where that slyboots Hirschfeld has hidden it in every new drawing. Nina was not amused. The self-absorbed, emotionally distant Hirschfeld resisted the role of a dad. Nina reacted erratically to her exclusion from his affection. Stern exhaustively traces her blighted life in this father-daughter relationship that never jelled.

Hirschfeld worked in color: more than a hundred TV Guide covers; no cultural snob, he. But this aspect of his work hides in the shadow of those more famed black-and-white caricatures in The New York Times. He avoided loading personal judgments or biases into his work and wouldn’t call himself a caricaturist because he felt that it licensed criticism and ridicule. (He preferred “characterist,” which mercifully, like the Interrobang and Esperanto, never caught on.) The passionate humanist liberal Hirschfeld almost never lent his name or fame even to urgent good causes. It’s tough to man the barricades when you’re trying to illustrate the charms of “My Fair Lady” or the brio of “Hello, Dolly!” or the slapstick comedy of “A Funny Thing Happened on the Way to the Forum.”

Stern’s book is thoroughly researched and her prose lump-free. She clearly stayed up late doing her homework. (How the hell did she ever dig up the fact that Hirschfeld not only played semipro baseball early in his New York days, but did so alongside Lou Gehrig?) Good for her, good for Al Hirschfeld, of whom there will never be another. Even before the pandemic, the elegant theater milieu in which he thrived had all but dried up and blown away. Broadway is becoming a suburb of Hollywood. People no longer dress up for an evening on the Rialto. And it’s all too safe a bet that a miserably small fraction of those who will soon be milling around inside the Al Hirschfeld Theater could tell you who Al Hirschfeld was.