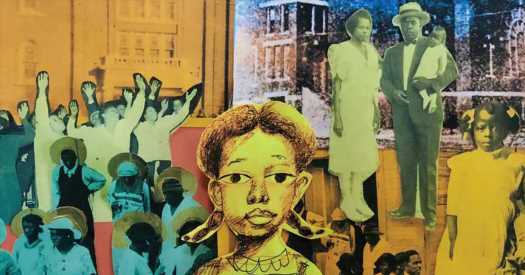 The city of Tulsa, Okla., unleashed hell on earth 100 years ago this month when it deputized part of the mob that looted and burned the prosperous African-American community of Greenwood. When the carnage subsided, perhaps as many as 300 Tulsans lay dead. Thirty-five square blocks of homes, churches and schools — along with a storied business district known as Black Wall Street — had been systematically torched and reduced to ash.

By creating “Opal’s Greenwood Oasis” and “Unspeakable: The Tulsa Race Massacre” for young people, the authors of two new picture books have reminded us that many who survived the fiery conflagration of 1921 were children at the time.

Kinney Booker was 8. Seventy-five years later, he recalled hiding in the attic while white vigilantes marched his father away at gunpoint and set the house ablaze. As Kinney and his siblings fled through streets where even utility poles were burning, his terrified younger sister asked, “Kinney, is the world on fire?” He responded, “I don’t think so, but we are in deep trouble.” Elsewhere in Greenwood, 6-year-old Olivia Hooker heard what she presumed to be hailstones but soon learned was gunfire. After driving the Hookers from their home, white marauders stripped it of valuables, destroying what they could not carry away. Elwood Lett was 4½. His family nearly escaped in his grandfather’s wagon but ran afoul of a white man who used the n-word and shot Elwood’s grandfather dead. “My mother let out a scream,” he recalled in the 1990s: “‘Oh, you have killed my father, you’ve killed him,’ and I thought he was going to do the same thing to my mother.”

African-Americans came to what is now Oklahoma in the first half of the 19th century on the Trail of Tears — as property of slaveholding Native Americans — and later as Exodusters, named for the exodus of African-Americans from the white supremacist South. Yet Americans raised with the Hollywood version of history are often surprised to learn that there was a significant Black presence on the frontier and that Greenwood was a mecca of economic power commanded by a Black elite including doctors, lawyers, hoteliers, real estate developers and newspaper editors.

These sensitively written, beautifully illustrated books restore this often-elided history while explaining the ensuing tragedy in a manner appropriate for children. Both books lovingly depict the striving, close-knit Greenwood enclave as it appeared on the eve of its destruction.

The authors of “Opal’s Greenwood Oasis,” Najah-Amatullah Hylton and Quraysh Ali Lansana, are both poets and teachers with deep connections to Oklahoma and Tulsa. Skip Hill’s emotionally resonant, collage-style illustrations show the influence of the artist Romare Bearden.

The book introduces Opal Brown, a delightful young girl in pigtails who is brimming with pride because she has just learned to ride a bicycle. Sitting on the bike, with the classic wicker errand basket attached to the handlebars, Opal announces she has “just finished third grade” in Greenwood in 1921. Describing her beloved community, she says: “In Greenwood, we have everything we need, and it might surprise you to know that everyone looks like me.” As she cycles off on an errand for her mother — her first ride alone — Opal gives us an overview of Greenwood. Black families are preparing food and setting out tables for the annual Memorial Day picnic. The joyous celebration is heartbreaking for adult readers who know of the cataclysm gathering offstage. 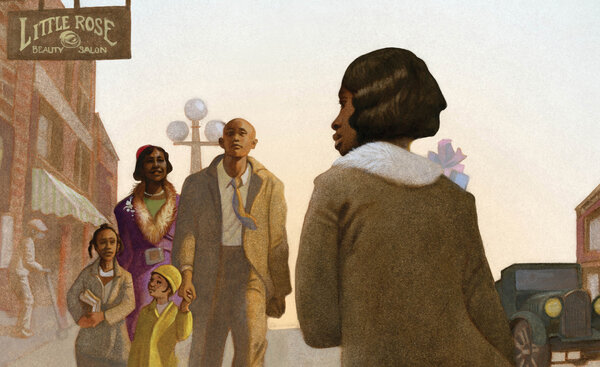 In “Unspeakable,” the acclaimed children’s author Carole Boston Weatherford continues the exploration of African-American history that has earned her three Caldecott Honors, including one for “Moses: When Harriett Tubman Led Her People to Freedom,” and a Newbery Honor for “Box: Henry Brown Mails Himself to Freedom.” Her forebears lived through the period of white supremacist terrorism of which Tulsa was but one example.

The award-winning illustrator Floyd Cooper was born and raised in Tulsa, where none of his teachers ever mentioned the massacre. He learned of it at a grandfather’s knee.

Weatherford deals directly with the racist tenets of segregation. She explains that the railroad tracks separating the white city from the Black were emblematic of laws that forbade marriages across racial lines and that called for “separate neighborhoods, schools, phone booths, and railroad and streetcar coaches.”

Like “Opal’s Greenwood Oasis,” “Unspeakable” celebrates the flourishing world that Greenwood had built behind the Jim Crow curtain. Weatherford describes the enclave’s all-Black school system as a place “where some say Black children got a better education than whites” and portrays the Black business strip as a promenade where men and women who worked menial jobs in the white city strolled in their finest, seeing and being seen: “Miss Mabel’s Little Rose Beauty Salon boomed on Thursdays when maids who worked for white families got coiffed on their day off and strutted in style up and down Greenwood Avenue. The soda fountain at Williams Confectionary was the backdrop for scores of marriage proposals.”

Some of the people who built Black Wall Street were examples of what white supremacists called “bad Negroes.” They declined to bow and scrape, and defended their rights with pistols if necessary. This made the Black city within the city anathema to white Tulsans who viewed Black affluence as an affront, and “proof that African-Americans could achieve just as much, if not more than, whites.”

Race hatred found an opening when a young Black man who shined shoes in the white downtown was falsely accused of assaulting a young white woman who worked as an elevator operator. White men who hoped to see the Black man hanged clashed with Black men who arrived to prevent a lynching. The powers-that-be used this episode as an excuse to raze Greenwood to the ground.