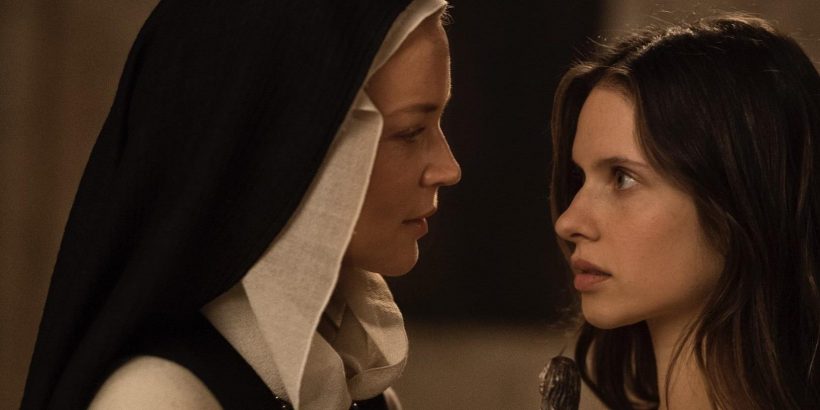 Benedetta begins with a minor miracle, when a young girl en route to enter a convent prays at an altar to the Virgin Mary to dissuade a bandit from attacking her family. A bird flies out and defecates in the one unscarred eye of the would-be attacker, thus setting the stage of a film that itself is a minor miracle, one that also pairs the glory of religious expression with the everyday navigation of shit being flung.

Based on an academic tome by Judith Brown published in 1986 that provided exacting detail drawn from the 17th century court proceedings, Paul Verhoeven and his Elle screenwriting collaborator David Birke have moulded this story of lesbian love, political corruption, and plague-era mischief into a work of salacious brilliance.

Anchored by extraordinary performances by Virginie Efira, Daphne Patakia, Lambert Wilson, and the international treasure that is Charlotte Rampling, at its core the film is about the mechanism of lying and its underpinning of faith and belief, and the existential crisis that occurs when one encounters a confabulator even more capable of mass delusion, both regarding untruths told to others and especially the lies told unto themselves.

This is a deeply nihilistic narrative, one that on its surface lays bare the raw political machinations supposedly done for higher purposes. An opening scene where a barter for the rate of dowry exhibits the collision between the pragmatic and the guise of ethical superiority, and from there the story exposes how the very institutions themselves corrupt any notion of purity of spirit.

As the violence escalates, the lies become more and more sophisticated, resulting in a Shakespearean battle of wills that upsets the direct balance of power within the convent. It’s only when the wall is breached that the true evil is let in, and the internecine battles between the nuns made more insignificant by the larger institutions that hold even greater power. Throughout we meet those who espouse faith while holding little belief in higher powers themselves, parsing evidentiary elements of supposed miracles, or being skeptical that the convenient excuses of religious epiphany appear identical to the ravings of lunacy.

Shot with a cool touch, the film looks like some lost tapestry, with candle-lit cells and dreary convent walls speaking of the insular nature of the nuns. Even in the broad daylight there’s a muddy palor, yet the spark connecting Benedetta to her lover glows as bright as the sun.

This is another in Verhoeven’s long career of films that manage to be satiric, provocative, banal and bravura simultaneously, with several fart jokes littered amongst dialogue scenes that are presented with a chilly formalism. The web of connections between the characters, particularly the nuns, exhibit a cloistered, claustrophobic dread, even when moments of intimacy are allowed to shine.

This is a film unafraid to be soiled, unabashed to lay bare the truths of the lies and the hypocrisies of the hyperbolically chaste. The result in a film where the most just must be sacrificed and the most corrupt allowed to rise implausibly to power, all under the guise of an invisible being supposedly controlling even the most wicked of acts.

Verhoeven made clear that this cannot be blasphemy, for it is based on what really happened. Whether that logic stands is up for debate, but what’s not is that this is a tonally rich, libidinously powerful, and psychologically complex tale told by a master filmmaker equally at ease with European art-film conventions and B-movie hijinks. It’s this exceptional balance between the profane and the profound that sets Benedetta apart, truly proving to be penetrating in its effect in more ways than one.