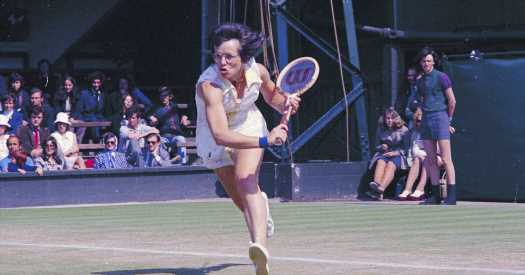 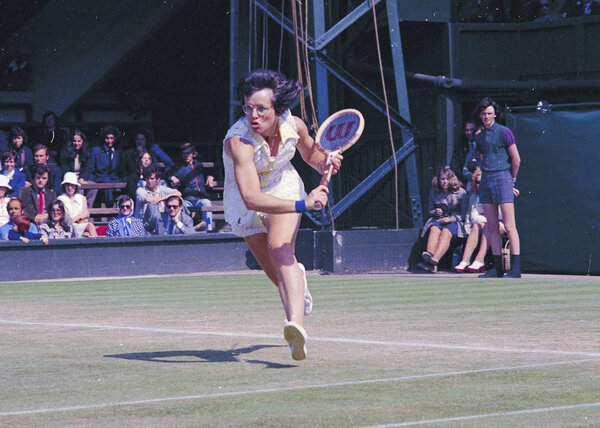 Billie Jean King isn’t interested in being a legend — she’s interested in succession. Her latest memoir follows two previous efforts to sum up her extraordinary career — one spent as a former No. 1-ranked tennis player, a 12-time Grand Slam champion, a founder of the Women’s Tennis Association and, of course, winner of the Battle of the Sexes versus Bobby Riggs in 1973. She’s up to something more overtly political now with “All In,” and the urgency with which she writes — here with Johnette Howard and Maryanne Vollers — about her life’s work as an activist gives one the sense that it’s essential to her that the mantle is passed to the next generations (and that they’re fired up about it!).

The book is concerned with King’s work to make tennis a more equal and inclusive sport — work she knows to be perennial and prone to setbacks — and it reads as a playbook of sorts, a life narrative peppered throughout with instructions for how to win the game. Yes, there are ready-made aphorisms everywhere: “Champions adjust,” “Pressure is a privilege” and the widely applicable “Every decision should be for a tactical advantage, period.”

Like many professional tennis players, King is in constant motion, not given to dwelling on highs and lows, as there’s always another battle that awaits. But she’s also an ardent student of history and a compelling narrator. She walks us through her remarkable life, which includes some of recent history’s most remarkable events.

There’s a clear through-line from King conferring with Gloria Steinem in the offices of Ms. magazine, to embracing the fight for racial equity in South Africa as Arthur Ashe also grappled with apartheid, to playing on a high school court in Honolulu while a young Barack Obama looked on. King’s instincts to shape seismic events in culture have set the table for (and in some cases, created) conversations about race, gender identity, sexuality and equity that are especially resonant now, and it’s hard not to read this book as a call to arms.

But it’s also plenty personal: “All In” traces King’s working-class beginnings as a Long Beach public courts kid, with a firmly traditional family and a Southern California cultural context more ’50s Bob’s Big Boy than ’60s Laurel Canyon. While she exhibited precocious talent as a junior player and translated her skills into collegiate and international success, no structure existed to provide women with a viable professional tennis career until she made one in the early ’70s.

She and her fellow amateur female athletes asked again and again for “prize money commensurate with that of men, equal exposure in center court matches and better treatment by the news media, which subordinates women’s tennis to the men’s game,” and were continually denied. It was only after lengthy battles with the tennis establishment — led by the promoter Jack Kramer, who worked diligently with male superstars of the era, including Ashe and Stan Smith, to ensure that women remained diminished — that she decided to act, spearheading the organization of a group now known as the Original 9 to create the Virginia Slims tour.

From there King went on a tear on the court — racking up her career Grand Slam and completing a triple crown at Wimbledon (the singles, doubles and mixed-doubles championships). Upon winning the Battle of the Sexes against Riggs, the self-proclaimed male chauvinist pig, she developed a growing understanding that she’d have to be the first female athlete-activist.

“‘This is the culmination of 19 years of work,’ I told the press that night. ‘Since the time they wouldn’t let me be in the picture because I didn’t have on a tennis skirt, I’ve wanted to change the game around. Now it’s here.’”

In 1972, her testimony in front of Congress all but guaranteed the passage of Title IX, which ended discrimination based on sex and is hailed as the single most important moment in women’s sports history. That 94 percent of women in American C-suites say they played sports as girls, and that collegiate athletes like me had their education paid for because of Title IX, is evidence of its generational impact.

In the ’80s King’s career slowed down, featuring fewer titles and some business calamities, and her life was upturned by a palimony suit filed by a former female lover. King’s outing, along with costing her millions in sponsorships, set in motion a period of deep introspection and allowed her to finally deal with lifelong struggles with eating disorders and internalized homophobia, and it also seems to have clarified for her the need to battle the sport’s elitism in a more tactical and intentional way.

When she was a young girl, her dust-ups with the tennis establishment at the stuffy and exclusionary Los Angeles Tennis Club — over everything from sexist dress codes to racist door policies — had irritated the working-class kid, and while she might not have had a road map, exactly, for what shape her future activism would take, she definitely saw the road. “There was this gap between what I thought I was capable of and the world as it was,” King writes. “I saw that gulf clearly. I was less sure how to breach it.”

Her continuous fight to be included — and her instinct to include others in the fight — made her a force in real time. But it’s from these years in the wilderness when she took stock — particularly following the deaths of ultimately close friends like Ashe and Riggs — that King began to put a contemporary activist framework around her trailblazing.

Her efforts in the decades since, from advising the ’99ers — the U.S. women’s national soccer team, which turned their victory in the 1999 World Cup into a viable professional league — to defending L.G.B.T.Q. rights, work that was recognized by Obama with a Presidential Medal of Freedom, have been defined so much by her activism that it’s easy to take her for granted, and easy to assume that someone is ready to take her place.

“I’ve told people if I die right now I’d be really ticked off because I’m not finished,” she writes, scanning the horizon. “Time is running out for real, and I’ve always had a sense of urgency.”

Despite a resurgence in recreational popularity and huge money at the top of the ecosystem, tennis is at a crossroads: Equity, parity and inclusion are still not always the priority. The absence of a clear new leader means that King must view her work as imperiled. With the sport currently in turmoil over player unions, the lack of a viable domestic violence policy, a vociferous battle over press obligations and rumors of venture capital at the gates, ready (for better or worse) to buy it all up, King’s book arrives with the same exquisite timing that has defined her style of play as well as her life.

It’s easy work to be a former champion, easier still to be a legend — after all, the job requirements are nothing beyond showing up. But it’s not easy to be an activist, and it’s certainly not easy to commit your life to pushing the world closer to how you want it to be. “All In” reads as a manifesto, like “Letters to a Young Poet” with a heavy dash of bell hooks. Billie Jean King is not done yet, but as she says here, “If you’re in the business of change, you have to be prepared to play the long game.” Her book is a powerful rallying cry, in a life full of them, for how she hopes we play the game after she’s gone.