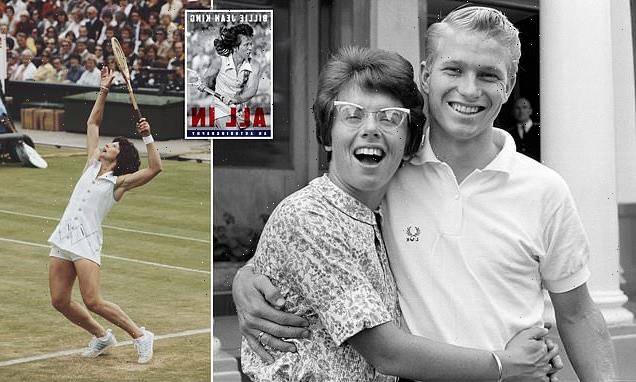 The ‘ugly’ girl who slammed it to the men: Billie Jean King’s toughest opponent was the male establishment — but she took them on and won… game, set and match

The country has been gripped for two weeks by the performance of 18-year-old British player Emma Raducanu in the U.S. Open Tennis Championships.

But the young prodigy herself must have been overwhelmed by the standing ovation given to her this week by sports legend Billie Jean King, who watched from the stands of the national tennis centre named in her honour.

Raducanu’s powerful play coupled with her endearing personality and media appeal mean she can expect to make millions in sponsorship and advertising in a game where men and women earn equal prize money. 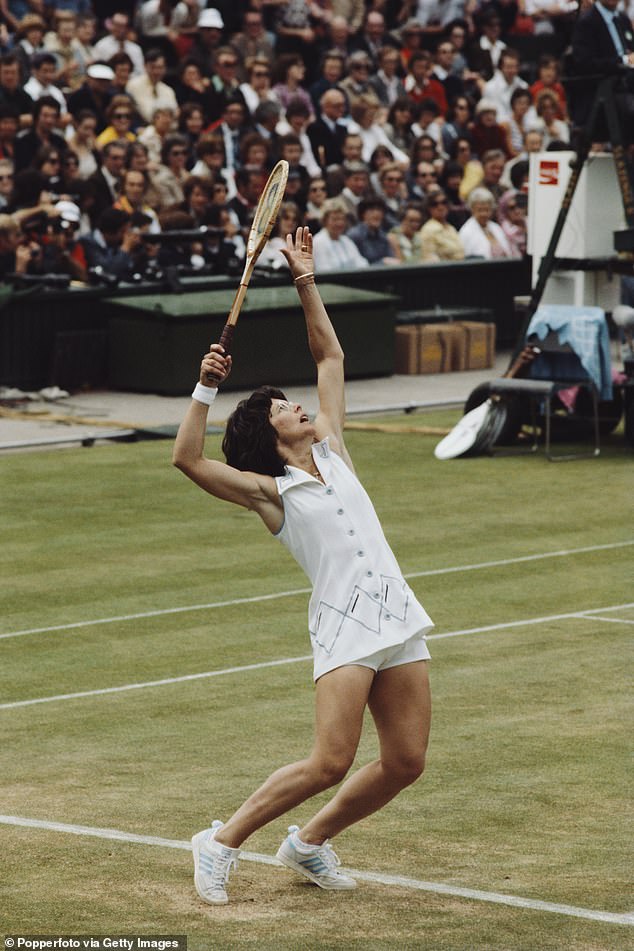 Billie Jean King, who won 39 Grand Slam titles before she retired in 1983, has penned a memoir about her time as one of the best tennis players in the world. Pictured: Billie Jean King at Wimbledon in 1977

But none of this would have been possible without the pioneering career of King, who fought as many battles off court as on it.

When she was just 15, a tennis coach predicted that Billie Jean Moffitt would one day be the best player in the world — adding casually: ‘You’ll be good because you’re ugly.’

King grew up in an era when men considered it entirely normal to comment unfavourably on a woman’s appearance and thought it ‘unfeminine’ for any woman to aspire to be a professional athlete. Billie Jean had other ideas as this frank and, at times, painful autobiography shows.

Born in California in 1943, Billie Jean was an energetic, boisterous child; today, she says, she would probably be classified as hyperactive. She first picked up a tennis racket when she was ten and loved the sport from the start.

By 17, as one of the top-ranked players in America, she played for the first time on Wimbledon’s Centre Court, ‘the most beautiful tennis court ever created’. She and her 18-year-old partner, Karen Hantze, won the ladies’ doubles and still hold the record for the youngest ever pair to win a Wimbledon doubles title.

In college, Billie Jean fell in love and married blond, handsome Larry King, himself a talented player. He was furious at how she was ignored by the college’s coaches, who were interested only in the men.

It was Larry, Billie Jean maintains, who first made her a feminist.

In 1964 she dropped out of college to play full-time, and two years later the new Mrs King won Wimbledon, her first major title. 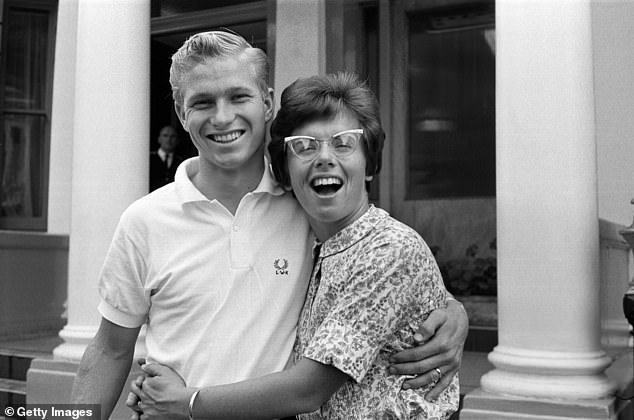 Billie was belittled and ignored, when she tried to get the leading male players to support her fight for better pay. Pictured: Billie and Larry

Yet while male players were increasingly turning professional and earning good money, there was no prize money for the women. For winning the Wimbledon singles in 1966, she received a £45 gift voucher.

When Billie Jean tried to get the leading male players to support her fight for better pay, she was ignored and belittled. American player Stan Smith declared: ‘These girls would be much happier if they settled down, got married and had a family. Tennis is a rough life and it really isn’t good for them.’

In 1970, nine women players, led by Billie Jean, formed a women-only professional tour. They secured sponsors, did their own publicity and sometimes even stood on the pavement selling tickets to their matches. It was a huge success and in 1971 Billie Jean became the first woman athlete to earn $100,000 — an event so significant that President Nixon called to congratulate her.

In September 1973, she squared up to Bobby Riggs in the ‘Battle of the Sexes’, perhaps the most hyped tennis match ever.

Riggs, who had been a tennis champion in the 1930s and 40s, loudly proclaimed that women players were so inferior that, even aged 55, he could beat any one of them. He had already trounced her biggest rival, the Australian Margaret Court, and the pressure on Billie Jean to win the $100,000 winner-takes-all contest was immense. 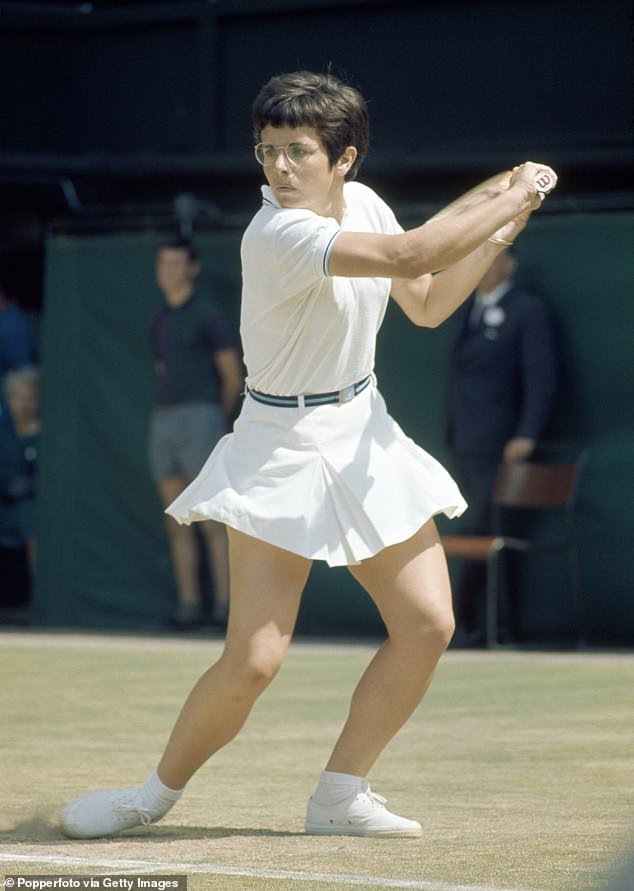 Billie (pictured) lost $500,000 in endorsements after hair stylist Marilyn Barnett sued her, while demanding lifetime support and a share of her earnings

An estimated 90 million people watched the match on television.

Her straight sets victory made headlines all around the world. But while her career soared, her private life was in freefall. She had told Larry early on that she was sometimes attracted to women, but he shrugged it off.

In 1972 she began an affair with Marilyn Barnett, a hair stylist. Larry refused a divorce, believing their marriage could still be saved.

Gradually Marilyn became ‘possessive and extremely controlling’ and, in 1981, Marilyn sued Billie Jean, demanding a house in Malibu, lifetime support and a share of her earnings.

Although Billie Jean won the court case, the fallout was devastating. Larry stood by her but sponsors deserted her — one wrote to her calling her a ‘slut’ — and she lost $500,000 in endorsements. She received sackfuls of hate mail. The burden of it all nearly broke her.

Even so, she still couldn’t bring herself to admit publicly that she was gay. ‘I’m not sure people truly grasp how bad it was then,’ she writes of the discrimination gay people faced. 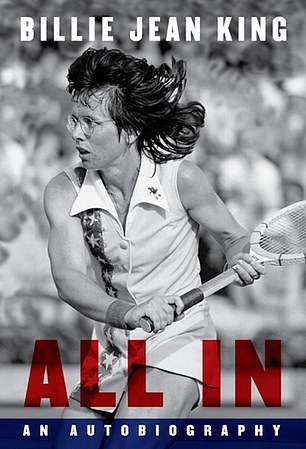 Her marriage limped on, even though she had fallen deeply in love with South African tennis player, Ilana Kloss.

In 1983, after 27 years of competitive tennis, she finally retired. She had won 39 Grand Slam titles, 20 of them at Wimbledon, and had spent five years as world No.1.

Billie Jean and Larry divorced in 1987. Larry remarried and Billie Jean and Ilana are godparents to his children, but it wasn’t until eight years later, aged 51, that she felt able to come out as gay.

She and Ilana married quietly in 2018 after her friend John McEnroe told them to get on with it.

This is a terrific read for anyone with even a passing interest in tennis, even if the final third of the book, which deals with her activism, veers towards preachiness. Anyone looking for juicy titbits about the other great personalities of her era, such as Evert, Navratilova, Connors and Borg, will be disappointed. She’s not a gossip.

Billie Jean was an outstanding athlete who didn’t just break the glass ceiling for women athletes, she took a sledgehammer to it.

In 2020, nine of the ten highest-earning woman athletes were tennis players.

For this, as for much else, we have Billie Jean King to thank.