This year has been, much to everyone’s surprise, a blockbuster for the publishing industry. Despite the relentless news cycle, readers have bought books in droves. Hardcover sales are up, and unit sales at independent bookstores have risen 5 percent. Multiple titles — Bob Woodward’s “Fear,” Bill Clinton and James Patterson’s “The President Is Missing” and Michelle Obama’s “Becoming” — have passed the million-copy mark, while there is also a surprisingly strong appetite for literary fiction.

But what should be good news for publishers, agents and authors has created headaches during the crucial holiday sales season, as printing presses struggle to keep up with a surge in demand, creating a backlog that has led to stock shortages of popular titles.

Several of this year’s most critically acclaimed novels, including Lisa Halliday’s “Asymmetry,” Richard Powers’s “The Overstory” and Rebecca Makkai’s “The Great Believers,” were listed as out of stock on Amazon the week before Christmas after inventory ran low because publishers could not to reprint copies quickly enough. Best-selling and critically lauded nonfiction titles like David W. Blight’s biography of Frederick Douglass, Samin Nosrat’s cookbook “Salt, Fat, Acid, Heat” and Ben Reiter’s “Astroball” were also unavailable on Amazon, with some titles showing shipping dates of two to four weeks from now.

The industrywide paper jam has been building for months — a result of shrinking and consolidation among printing companies, the collapse of one of the major printers this summer, global paper shortages and a tightening job market that’s made it difficult for printers to hire additional seasonal workers. But it has become increasingly acute and visible at the industry’s peak sales season, when consumers are shopping for must-read titles to give as gifts, and finding that Amazon’s virtual shelves are bare.

For authors whose books have been out of stock in the run up to the holidays, it can be hard to recover the lost royalties and sinking Amazon rankings. In a Facebook message, Ms. Makkai urged readers to shop at independent stores for her novel after Amazon listed it as out of stock and indicated it wouldn’t ship until after Christmas. “This whole situation is rotten, and my press is doing everything they can, but ugh, this is really, really bad timing,” she wrote.

Agents and authors say part of the problem is that publishers and retailers have become more risk averse. Publishers are printing smaller first runs, partly because retailers are ordering fewer copies initially, waiting to see which titles take off to avoid making the wrong bet and getting stuck storing unsold inventory. In the past, it was often easy to get another batch of books printed in a week or two if a title sold unexpectedly well, but these days some publishers say it can take one or two months.

On top of that, the seemingly bottomless appetite among readers for a handful of blockbuster titles has tightened the bottleneck at the printing presses, consuming what little slack there was in the system. Mr. Woodward’s “Fear” has sold nearly two million copies in all formats, while Mrs. Obama’s “Becoming,” which came out in November, has sold 3.8 million copies.

“The capacity is so tight that if you get a book that takes off like ‘Becoming,’ you have to stop what they were printing and print more ‘Becoming,’ then whatever they were printing is late,” said Dennis Abboud, the chief executive of ReaderLink, the main book distributor to Target, Walmart and other outlets. “Then the train is really off the rails.”

At the same time, publishers have been caught off guard by a handful of surprise best sellers, literary titles from lesser-known authors that are now in short supply the week before Christmas, the worst possible time to be out of stock. 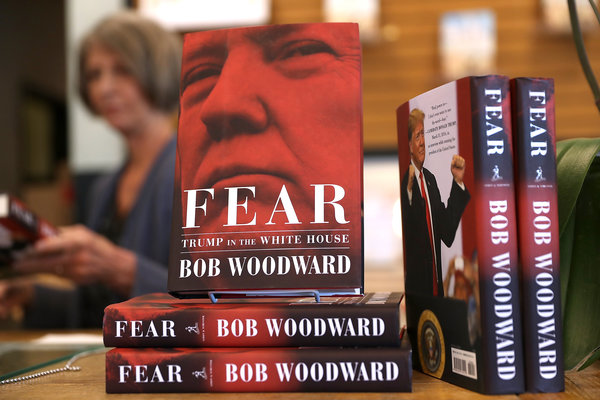 “All of the sudden, there’s just no capacity,” said the literary agent Chris Parris-Lamb, who represents Ms. Halliday. “The books that become outliers, the ones that are actually selling, then they become a victim of their own success.”

The backlog is so severe that it is spilling over into next year, causing publishers to shift the release dates for some January books because they can’t print copies in time. At Penguin Random House, at least a dozen titles scheduled for early 2019 have been pushed back, typically by a few weeks, according to a company executive. Other publishers said that a handful of titles were being delayed because of the backlog at the printers.

“In the macro, business is healthy and there are plenty of books on shelves across America for people to buy,” said Michael Cader, a book industry analyst and the founder of Publishers Marketplace. “But if it’s your book and there’s demand and it’s out of stock, that’s very painful.”

Every year during the holidays, a handful of unexpected breakout books sell out of stock, frustrating consumers and the authors who wrote them, but leaving the industry as a whole unscathed. But this year the shortages are more widespread, and the factors driving them are more systemic and harder to mitigate.

“It’s more complex than it’s been in the past. You can’t just count on making a phone call to your printer and saying this book is taking off, let’s do a press run this week,” said Adam Rothberg, senior vice president of corporate communications at Simon & Schuster. “This is the new normal for the foreseeable future.”

Madeline McIntosh, the chief executive of Penguin Random House U.S., said that most of the company’s in-demand titles were available through other outlets, despite being out-of-stock at some major retailers, and noted that “at this time of year, we are always working through issues related to spiking holiday demand for hot books.”

The biggest cause of the bottleneck, publishers and agents say, is consolidation and collapse among printing companies. One large printing company, Edward Brothers Malloy, shut down this summer. Next year, two of the largest printers in the United States, Quad Graphics and LSC Communications, are expected to merge, which publishers worry will lead to fewer options for printing services.

The printing industry has its own problems, including paper shortages and price increases. And the low unemployment rate has made it harder for printers to hire additional workers. Quad Graphics, which has 55 print-production centers and 22,000 employees worldwide, “has experienced staffing challenges due to record low unemployment,” according to a company spokeswoman.

Surprisingly, some of the current chaos has come about because the publishing industry is not only stable but seems to be thriving. After years of declining print sales, hardcover and paperback editions have been rising recently, while e-book sales have fallen. Publishers’ revenues from hardcover sales rose 3.5 percent in the first 10 months of this year, while revenue from digital books fell 3 percent in the same period, according to the Association of American Publishers.

Some big publishers have been investing in print infrastructure and inventory management in recent years, expanding their warehouses and improving their ability to refill orders from retailers quickly, but they have little control over the printing presses, where capacity has shrunk.

The effects are reverberating across the industry. This fall, W. W. Norton had to scramble to salvage an author’s book tour when they learned that books wouldn’t be available on his October publication date because the printers were overbooked. The author, James M. Scott, had more than a dozen events planned in October to promote his book, “Rampage: MacArthur, Yamashita and the Battle of Manila,” but the printer couldn’t deliver books until roughly a month later.

Norton was able to get a small batch of books to sell at the events, before the first print run was ready, but at great cost: It involved taking unbound pages, gathering them by hand and having them bound and shipped overnight to the event sites.

Norton also struggled to meet unexpected demand for Mr. Powers’s novel “The Overstory,” which was released in April with a first printing of 25,000 copies. Sales continued to climb throughout the year, and they got a boost when the novel was a finalist for the Man Booker Prize.

In mid-October, worried that stock would run out just before the holidays, Norton ordered a 10th printing of the book, an additional 10,000 copies. A priority rush order typically takes two weeks, but Norton was told that it would take two months. The new editions arrived at the publishers’ warehouse on Dec. 17, but those copies still needed to get to retailers in time for holiday purchases. Norton just ordered an 11th printing, which will bring the total copies in circulation to 115,000.

Still, it may be too late for some holiday shoppers.

“Demand has delightfully exceeded expectations,” Mr. Glusman said. “Is there such a thing as too much demand?”

The print shortages have left both large and small retailers scrambling, though a huge company like Amazon can more easily absorb the impact of lost sales than a small independent store.

Independent bookstores have also been struggling to meet demand for unexpected best sellers, though many placed more robust orders this year in anticipation of holiday shortages.

Catherine Bock, the book buyer at Parnassus Books in Nashville, said the store has run out of a handful of popular titles, including “Asymmetry” and “Salt, Fat, Acid, Heat.”

Robert Sindelar, the managing partner of Third Place Books in Seattle, said it’s been unusually difficult to restock popular titles this year. His store ran out of the Frederick Douglass biography before Thanksgiving. It sold out of “Salt, Fat, Acid, Heat” about a week ago. It recently got a small shipment of the title, but those were already presold, he said. “We probably could have sold another 100 of that one,” he said.

Ms. Nosrat, whose cookbook came out in April and has sold nearly 300,000 copies, said she and her agent realized in early December that copies of her book would most likely sell out before the holidays, even after an additional domestic printing this fall of 30,000 copies.

“I feel like I got punched in the gut a little bit,” Ms. Nosrat said. “But I’m aware that this is a rare and lucky problem to have.”