Christopher Lehmann-Haupt, the influential critic who died earlier this week, wrote some 4,000 reviews and essays during his three-decade tenure covering books for The New York Times. According to his obituary, “readers and colleagues called him a judicious, authoritative voice on fiction and a seemingly boundless array of history, biography, current events and other topics, with forays into Persian archaeology and fly fishing.” Here are some of our favorites.

[ Read the obituary of Christopher Lehmann-Haupt. ]

Lehmann-Haupt weighed in on Philip Roth’s “Portnoy’s Complaint,” saying, “It is told in a narrative that is a dictionary of Jewish jokes, and which, because of Roth’s prodigious mastery of a literary Jewish idiom, adds up to probably the best Jewish joke ever told — bizarre, exaggerated, visceral, profane and wildly funny.” — Feb. 18, 1969 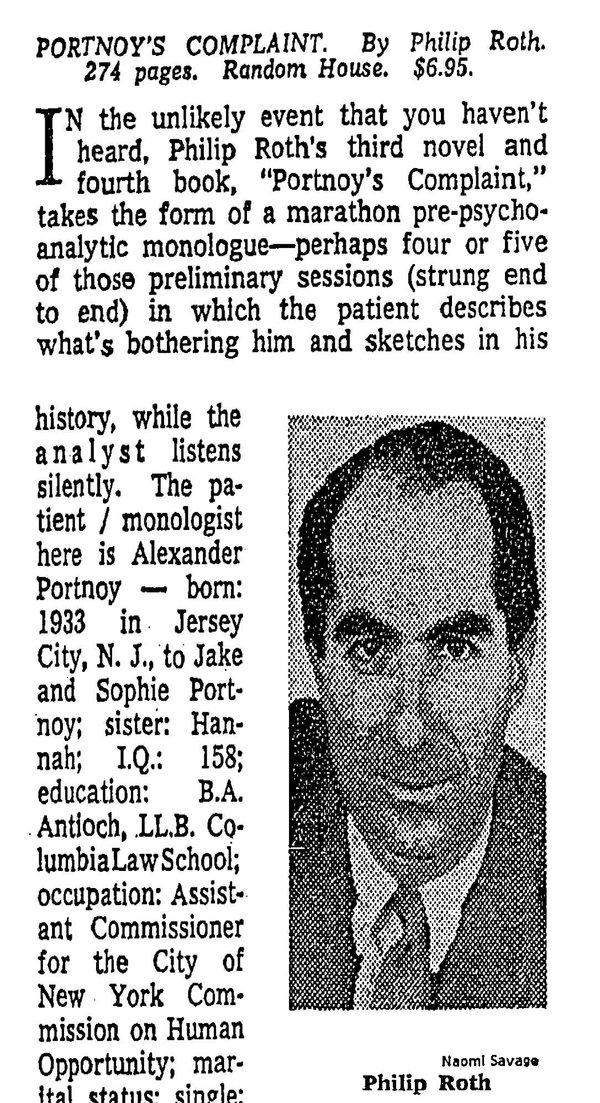 “Your reviewer recognizes a great passion when he sees it,” Lehmann-Haupt told his readers after finishing Zino. Davidoff’s “The Connoisseur’s Book of the Cigar.” “And he believes in the principle that anything worth doing is worth doing to excess. If one has world enough and time, one could do worse than be a reader of Davidoff and a smoker of cigars.” — Nov. 28, 1969

Lehmann-Haupt wasn’t a Jacqueline Susann fan. “‘The Love Machine’ is going to be devoured like popcorn at a Saturday matinee, so it’s irrelevant to judge it by any other standard than popcorn. Is it popcorn?” — May 9, 1969

Reviewing Kate Millet’s feminist manifesto, “Sexual Politics,” Lehmann-Haupt wrote, “Filled with shards of wit and the dry ice of logic, and written with such fierce intensity that all vestiges of male chauvinism ought by rights to melt and drip away like so much fat in the flame of a blow torch. (As it happens, I finished reading it just before embarking on that most archetypal of male bonding activities, an overnight fishing trip. Kate Millet’s arguments glowed in the flames of our campfire, and her scorn seemed mirrored on the surface of the most promising trout pools.”) — Aug. 5, 1970

In 1970, Lehmann-Haupt called Maurice Sendak’s “In the Night Kitchen” the best children’s picture book of the year, but admitted that people would “object to the depiction of Mickey in all his pink nakedness. Which brings up the question of how the story will affect little girls. Which is a question I know better than to discuss.” — Dec. 7, 1970

He was tough on Frederick Forsyth’s “The Odessa File.” “Like the builder of the bomb, Mr. Forsyth works with an odd assortment of uncompromising materials in making his fictional machine — materials that include a plastic mixture of historical fact and extrapolated fiction, a tin can full of far-fetched coincidences, a fuse woven out of standard concentration-camp atrocities, and a thin casing of propaganda about good Germans and collective guilt.” — Oct. 24, 1972

“I learned a great deal from this book that I did not know before,” Lehmann-Haupt said of “Our Bodies, Ourselves,” the book about women’s sexuality and reproductive health from the Boston Women’s Health Collective. — March 13, 1973

“You have to hand it to Kurt Vonnegut,” he wrote in his review of “Breakfast of Champions.” “He makes pornography seem like any old plumbing, violence like lovemaking, innocence like evil, and guilt like child’s play.” — May 2, 1973

“The last time Hunter S. Thompson tapped his skull against the edge of reality and emptied its content into a book, it made for a very weird omelet indeed,” began his review of “Fear and Loathing on the Campaign Trail.” — May 18, 1973

Though Lehmann-Haupt deemed Arthur Hailey’s “The Moneychangers” “not bad for a lazy summer afternoon in the hammock,” he had some problems with it: “The old-fashioned, avuncular tone of the narrative is so out of phase with some of the more contemporary scenes (like a description of a gang rape in prison, or a series of passages detailing a gangland torture) that the effect is not unlike the world of William Burroughs being filtered through the senses of Beatrix Potter.” — July 28, 1975

It’s a bleak world that Margaret Atwood opens up for us in her new novel, ‘The Handmaid’s Tale’ — how bleak and terrifying we will not fully realize until the story’s final pages. But the sensibility through which we view this world is infinitely rich and abundant. — Jan. 27, 1986

Lehmann-Haupt was a huge Stephen King fan. Here he is weighing in on “It”: “I don’t know offhand if it was Mr. King who first revived and revised the verb form of ‘gout’ — whose obsolete meaning, according to the Oxford English Dictionary, was ‘to drop’ or ‘to gutter’ — but blood in these pages gouts everywhere like water gushing from a fire hose.” — Aug. 21, 1986

In his review of Art Spiegelman’s “Maus: A Survivor’s Tale,” Lehmann-Haupt wrote, “The impact of what Mr. Spiegelman has done here is so complex and self-contradictory that it nearly defies analysis. … By claiming the Holocaust as a subject fit for comic-book art, Mr. Spiegelman is saying that the children of survivors have a right to the subject too, and have their own unique problems, which are comic as well as tragic.” — November 10, 1986