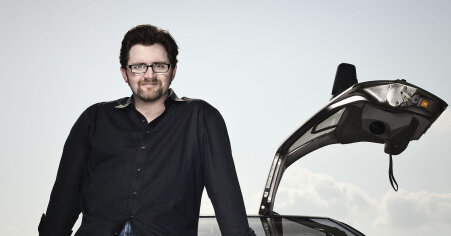 GAME ON When “Ready Player One” came out in 2011, Ernest Cline bought his dream car — a “Back to the Future”-inspired DeLorean — and logged 4,000 miles driving to bookstores to talk about his debut novel, which was made into a movie directed by Steven Spielberg. He’d park out front so fans could snap pictures of themselves alongside the iconic vehicle. “It was like a traveling ’80s museum,” Cline said in a phone interview. “It made for kind of a festive event.”

In November, his sequel, “Ready Player Two,” landed in a very different world — one where the futuristic technology Cline envisioned in “Ready Player One” has not only come to fruition but become indispensable. This time, instead of traversing the country, the former spoken word poet, lifelong gaming enthusiast and self-described “full-time geek” conducted a virtual author tour from his home in Austin, Texas. Sales of this novel do not seem to have suffered: “Ready Player Two” debuted at No. 1 on the hardcover fiction list, spent three weeks in that spot and is now at No. 4 in its sixth week as a best seller. It’s No. 1 on the audio fiction list, and “Ready Player One” is No. 15. (The actor Wil Wheaton narrates both books, as well as Cline’s alien invasion thriller, “Armada.”)

Cline has embraced virtual reality as a result of his work on the “Ready Player” books — in fact, when he realized in-person visits would be curtailed, he supplied friends and family with Oculus Quest headsets so they could hang out in 3-D. Clearly surmising that he was in conversation with a late adopter of everything, Cline explained, “My wife and I had our anniversary in a VR room. It was really cool. There’s an app called Big Screen where you can hang out in a living room with a movie screen and we showed video and photos from our wedding slideshow. We feel like we were the champions of social distancing.”

This Ohio native is married to Cristin O’Keefe Aptowicz, a fellow author whose 2014 book, “Dr. Mütter’s Marvels,” crossed paths with “Ready Player One” on the best-seller list. The pair, who met on the poetry slam circuit, have real-life, framed evidence of the overlap hanging in their living room.

In his novels, Cline said, he strives to portray “the good side and the bad side” of innovation. “I think there’s always both,” he said. “Whenever we create a technology, it’s to improve our lives, but it can have unforeseen side effects that we then have to mitigate. That’s humanity’s push and pull, that love-hate relationship.”