ENDEAVOUR: THE SHIP AND THE ATTITUDE THAT CHANGED THE WORLD

When the native peoples of Australasia saw Captain Cook’s ship, the Endeavour, for the first time in 1770, they did not know what to make of it.

According to oral tradition, the Maoris in New Zealand originally took it to be a giant bird and admired ‘the beauty and the size of its wings’. The Aboriginal people on Botany Bay assumed the same, and thought it was filled with opossums scampering up and down its wings and legs.

The men of the Endeavour did not always receive a friendly welcome when they landed. They were the first Westerners to witness a Maori haka, now mostly seen on rugby pitches. 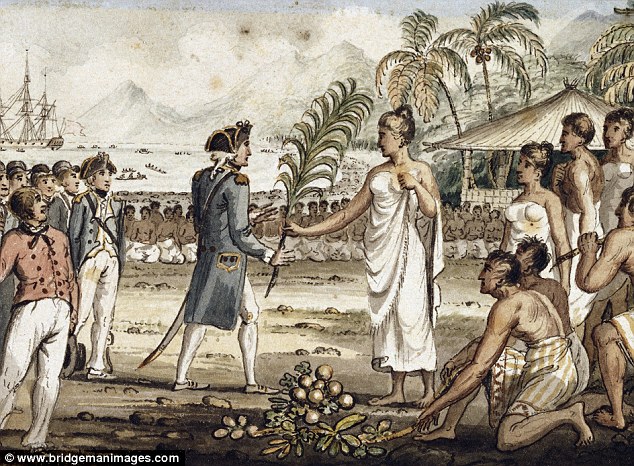 One sailor wrote of ‘a hundred of the Natives all Arm’d’, who ‘drew themselves up in lines. Then with a Regular Jump from Left to Right and the Reverse, they brandish’d their Weapons, distort’d their Mouths, lolling out their Tongues and turn’d up the Whites of their Eyes’. All of this was ‘accompanied with a strong hoarse song’.

The strangeness of the haka was just one indication of how far the Endeavour and its men had travelled. They were thousands of miles from home.

As Peter Moore writes in his absorbing account of the ship and its extraordinary voyage, theirs was an isolation ‘in some ways beyond even that which the astronauts of Apollo 11 experienced in 1969 as they stood on the moon’.

To many, HMS Endeavour may have seemed an unlikely vessel to be ploughing through the waters of the Pacific.

Originally named the Earl of Pembroke, it had been built in 1764 in Whitby to carry coal, and was only 97 ft 7 in from stem to stern — about one-and-a-half cricket pitches in length.

Whitby colliers were renowned for their sturdiness. When the Royal Navy was looking for a ship to convert for exploration in remote waters, the Earl of Pembroke was chosen and renamed Endeavour. Whitby also provided its captain, 40-year-old James Cook, who had a good reputation as a navigator.

Apart from Cook, the biggest personality on-board was Joseph Banks. Young, rich and good-looking, he did not want to make the kind of trip around Europe that was customary for his class.

‘Every blockhead does that,’ he wrote. ‘My Grand Tour shall be one round the whole globe.’ 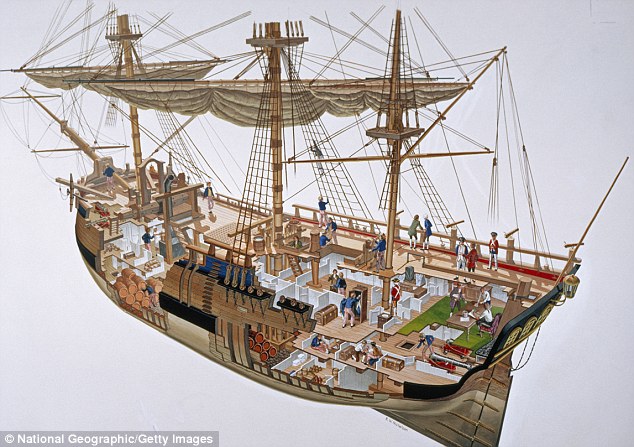 Fascinated by natural history, it was Banks who brought home a vast collection of plants and creatures previously unknown to science. He was also the man who asked the locals in Australia what the strange grey beast hopping through the landscape was. ‘Kanguru,’ they told him.

The first objective of the expedition was to reach Tahiti in time to observe the transit of Venus, a once-in-a-century astronomical event.

Tahiti already had a reputation as a paradise of sun, sex and easy living: ‘The women were far from being coy,’ as one visitor (rather coyly) put it. Many of the Endeavour’s crew took full advantage of the opportunities offered to them.

How likely is death on a long voyage?

‘Most of our ship’s company procured temporary wives,’ Sydney Parkinson, the Endeavour’s artist, reported. Joseph Banks was one of the most enthusiastic advocates of Tahitian free love.

Parkinson records a curious striptease scene in which a woman approached Banks with a ‘great many clothes upon her’, which she let fall to the floor.

Having ‘exposed herself quite naked’, she gradually twisted around in front of Banks.

The performance may have had more meaning to the Tahitians, but Banks chose to interpret it as a sexual invitation and led the woman to his tent.

Parkinson was a Quaker, but he was not averse to female company himself. On another occasion, Banks was returning from an encounter with a woman when ‘the first thing he saw was Shyboots Parkinson in bed with the girl’s sister’.

Shyboots also found time to create a list of Tahitian words. It includes the only one to make it into English: ‘Tatau’, a ceremonial process of imprinting a person’s skin with artistic markings. 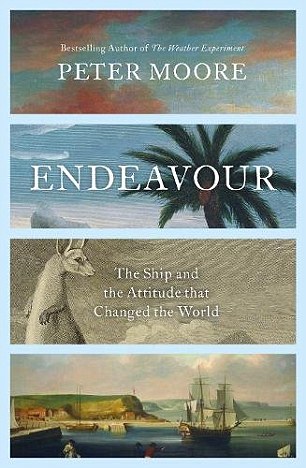 ENDEAVOUR: THE SHIP AND THE ATTITUDE THAT CHANGED THE WORLD by Peter Moore (Chatto & Windus £20)

Parkinson gained a Tahitian tattoo before he left, as did many of his comrades.

With the transit duly recorded, Endeavour departed Tahiti, no doubt to the deep regret of many of its sailors.

The second mission was to look for evidence of the existence of Terra Australis, the great mythical southern continent. This took Cook and his men to their encounters with both the Maoris in New Zealand and the Aboriginal peoples of Australia.

Endeavour returned home in triumph in 1771, but her later career was not a distinguished one.

She ended up as a floating jail for prisoners of the United States War of Independence, and was eventually scuttled off the coast of Newport, Rhode Island.

It seems a dismal fate, but Moore’s book pays brilliant tribute to what was arguably the most significant ship in the history of British exploration.

And in his final pages, he offers hope that the remains of the Endeavour may yet be recovered from the waters of Newport harbour.

What Comes Out On Netflix In June 2022? Check Out The List Here!

Muse to Step in for Foo Fighters at Aftershock Festival