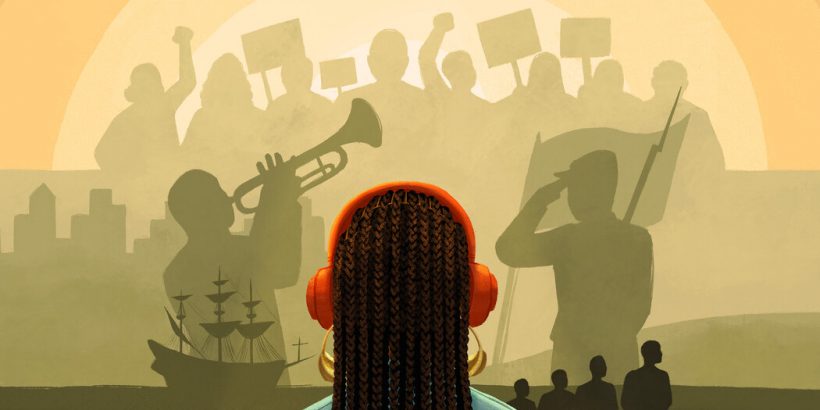 On a recent sunny winter day, I drove 40 miles from New Orleans to a plantation on the southern banks of the Mississippi. The Whitney Plantation, first opened to the public in 2014, is the only plantation museum in Louisiana exclusively focused on the history of enslaved people. While walking its grounds I listened to an hourlong audio tour, which seemed to conjure ghosts and whispers. I recognized these as the same echoes that had been with me the week prior, in the audiobook I had been listening to: FOUR HUNDRED SOULS: A Community History of African America, 1619-2019 (Random House Audio, 14 hours, 2 minutes), edited by Ibram X. Kendi and Keisha N. Blain. This museum tour of Black stories was not only a coincidental appendix to that book, but also testament to how aural narratives, for their ability to unfurl in your mind while you are taking in the world around you, can be far more than background. They can be all-consuming.

In the book’s introduction, Kendi equates the project to “a Black choir singing the spiritual into the heavens of history.” It is at once a song and a continuation of a centuries-old tradition of oral histories, in the form of 80 essays and 10 poems, all commissioned to chronicle 400 years of Black life in America. There are academic essays, thoroughly reported profiles and lyrical memoirs side by side, from voices as disparate as the historian Nakia D. Parker’s, the writer Kiese Laymon’s and the journalist and academic Isabel Wilkerson’s. The stories, running chronologically in five-year increments and read by a full cast, can at first sound disjointed in their different approaches, but they have much in common: an urgent mission to autopsy history as it’s long been taught in this country, and to pull at the threads between the past and the present as a way of showing just how intact they are.

Sort through those threads and follow one far into an imagined future, and you might end up at THE ONLY LIVING GIRL ON EARTH (Scribd Originals, 1 hour, 12 minutes), by the National Book Award winner Charles Yu. This short story — itself a collection of free-floating but connected fragments — takes place in the year 3020 and centers on Jane, who is the sole employee of “Earth: The Gift Shop,” which is all that is left on the planet, after “Earth: A Bunch of Civilizations” became uninhabitable and “Earth: A Theme Park” fell into disrepair. Yes, most of the metaphors and parables packed into this story — a grab bag of sci-fi tropes highlighting humanity’s hamster-wheel existence — are this heavy-handed. But, as a brief and entertaining thought experiment buoyed by some masterly turns of phrase (a telescope described, for example, as a “needle pointing out into the haystack of empty space”), the story will hold your attention, especially in audio form, thanks to a skillful narration by the voice actor Jesse Vilinsky.

Is a short story always the opposite of the 14-hour historical epic that swirls around your mind for weeks? A snack instead of a meal? Try telling that to George Saunders, the kind of writer who talks about literature as if it is intricately linked to what makes us human. To listen to his newest book, A SWIM IN A POND IN THE RAIN: In Which Four Russians Give a Master Class on Writing, Reading, and Life (Random House Audio, 14 hours, 44 minutes), is the closest many of us will get to sitting in on one of his fiction writing classes. Using a selection of stories from 19th-century Russian masters — Chekhov, Turgenev, Tolstoy and Gogol — Saunders dives deep (occasionally headachingly deep) into what makes a story a story. Saunders calls the form “a frank, intimate conversation between equals” in one moment; in the next, “a continual system of escalation.” This is like one of those lectures-on-tape your grandfather used to listen to, except this time the teacher’s voice is joined by narrators like Glenn Close, B. D. Wong and Nick Offerman, who is unsurprisingly adept at capturing the personalities that might fill a rural Russian tavern.

A universe is large. I know this because Saunders’s book somehow exists in the same “how to” universe as EVERYBODY HAS A PODCAST (EXCEPT YOU): A How-To Guide From the First Family of Podcasting (HarperAudio, 5 hours, 9 minutes), by the brothers behind the wildly successful series “My Brother, My Brother and Me” and “The Adventure Zone.” This is a course on podcasting, except very funny, very current and (as one would hope) so listenable I devoured it in a day. Griffin, Travis and Justin McElroy — with guest appearances from their partners and their father — take turns offering firsthand experience on every step of production, from choosing your co-workers (“a great friend does not inherently make a great co-host”) to how long each episode should be (“I dunno, probably an hour? Next question”). This is a book for hard-core fans of the brothers’ growing roster, but it is also a thorough resource for anyone remotely interested in the world of D.I.Y. podcasting. And that, if my Twitter feed is to be believed, includes basically everyone.