Evolution results from the tension between disruption and order, a recognition that change is part of the being and momentum of the self. In Eileen Myles’s newest book of poetry, “Evolution,” we encounter an arrival, a voice always becoming, unpinnable and queer. Myles’s new poems are transformations, and perhaps a culmination of the poet’s previous inquiries into love, gender, poetry, America and its politics.

Evolution, from the Latin evolutio, means an unfolding or opening out of a curve, emergence or release from an envelope or enclosing structure, or a transformation. The questions Myles asks — Are we capable of evolution at this point in our American lives? Can we continue to open out of this place and release ourselves from the enclosing structures used to maintain this empire? If so, what might that mean of our future? — are queer questions, questions wholly invested in what is not yet possible.

Part of what makes queer and trans art dangerous is its willingness to wager its own future and expend the labor required to write oneself into the considerations of a nation. In “Evolution,” that energy builds and burns, in the quick pace of the lines, in unexpected shifts and leaps from interior to exterior, from sensuality to observation. The shifting is constructed to let an audience believe it is receiving everything of the speaker’s life, that each poem reveals a secret and private truth. In the poem “Sweetheart,” Myles acknowledges the artifice of this truth as well as a division of the private and the public-private:

I’m creating
a pattern
someone who
doesn’t love
me will
say you
say too too
much.

Movements like this, the flickering between what is thought to be known and what remains unknowable, are embodiments of queerness, and a facet of their power is that they cannot be dictated by the state. America cannot surveil imagination or curiosity.

Curiosity is not just queer; it is necessarily profane. Certainly the poems in “Evolution” are profane — as in outside the temple, outside the place of institutional knowledge and teaching. Queer and trans poetry always exists outside the center. The profane has the power to disrupt; not because a word or a body isn’t sacred, but because profanity acknowledges other knowledges and possibilities held in languages and bodies that are unwelcome in the temple. It allows other places to be made sacred, as in the book’s opening essay, when Myles has a “thought to make things and make things well. It’s such a beautiful thought. I won’t dwell on my own sexuality too much but I do want to say I love the idea of making something nice with another human being, perhaps me, not a baby but something nice. A special place perhaps.”

These poems do not decenter the body in exchange for engaging politics; instead they engage the body politic, which here is inescapably against the state. From the conditions of this politicked body — the queer condition, the working-class condition, conditions of whiteness or non-whiteness and gender in motion — Myles questions where we began or must begin again. In the poem “Dear Adam,” Myles dwells on what it means to

live in a stolen country that was always stolen
and worked largely by stolen people. Out of a conservative
diaspora came I mongrel poet from Massachusetts
to make my mark

love & these things and opportunities
to speak. 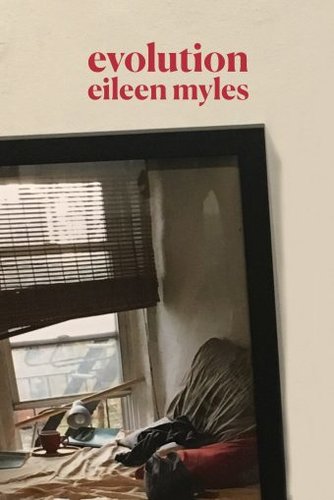 The following line relates our dependence on one another: “We can’t fall down we teem in the new opportunity / we discover what resistance means.”

What does America project onto or deny the queer sexual self, forcing queer people into invisibility or a violent type of hypervisibility? Expressions of queer sexuality are often called “explicit,” because queer and trans sex are both abject, outside of what is considered desirable. The form of Myles’s work rivals its subject matter in intimacy. The lines in “Evolution” are physical, a body unleashed but not yet comfortable and not without fear. The short lines rush down the page, movement as touch, touch as freedom. Consider these lines from the poem “Epic for You”:

in bed
it says
the man
hates
his
female insides
she’s
the sauce
of the world.

Expressions of sexual autonomy and power in “Evolution” exist in a space of abjection until Myles breaks them free, partly through the use of facts.

What are facts, and what does it mean to suggest, “This is a fact”? Myles employs a radical and subversive use of fact — loss made fact, queerness made fact, a trans body made fact, loneliness made fact. Each is placed in a list, or a gathering of information, until the poems break from the abject. Their speed and accumulation denies readers the power to anticipate or judge, leaving no time to reflect or refute the presence of desire. The reader arrives already in the middle of an accounting. Experience never settles into a type of knowing, as in the poem “So”:

Anything I say
is not
true, forgetting
everything & the present
popping
up like memory.

Myles’s poems make us reconsider what is experience, and does it have an order or is it a simultaneity? We too often believe when we speak of the interior we speak of something singular and known; Myles upends these notions. To live, to be, to lean toward what could be, requires multiplicity. So both selves, the speaker and reader, are held in the field of unknowing, and in these moments, the poems are at their most transgressive.

One minute on the inside, the next outside watching it all happen — taking account, of dogs and women and boats and friends. Language breaks from the static page. It becomes itself again, something forward and backward, up and down, outward, into all the planes of itself. Myles guides readers toward not just holding the page but feeling the language passing through — from Myles, onto the page, into the hands, into the hour, into the day. This is part of the queer experience of this collection: It won’t let you rest in the prescribed shape of a body. Not a body of poetry on the page, not the body reading these poems, and not the body you imagine the speaker to have.

One can be lonely and surrounded by friends and fame; one can be sad and still make love. This is not the context of queerness (though it seems America is capable only of talking about the context), but these are the conditions. The context is often the only way Myles’s work is read — irreverent, restless, “without manners” — all descriptions that dismiss the conditions of the queer or trans body. Yet the conditions determine the language we use to explain the context.

It’s no great wonder that Myles has reached what some might call fame now, after grinding for so long in the world of poetry. Because we have finally arrived in a version of the future that Myles once ran for president to imagine. This future, of course, is not the one anyone envisioned. But it is still an evolution. Eileen Myles is still becoming, as a poet, as a griever, as a lover, as an American, as a body both capable and deserving of desire and pleasure.

Natalie Diaz is the author of the poetry collection “When My Brother Was an Aztec,” and the recipient of a 2018 MacArthur fellowship.