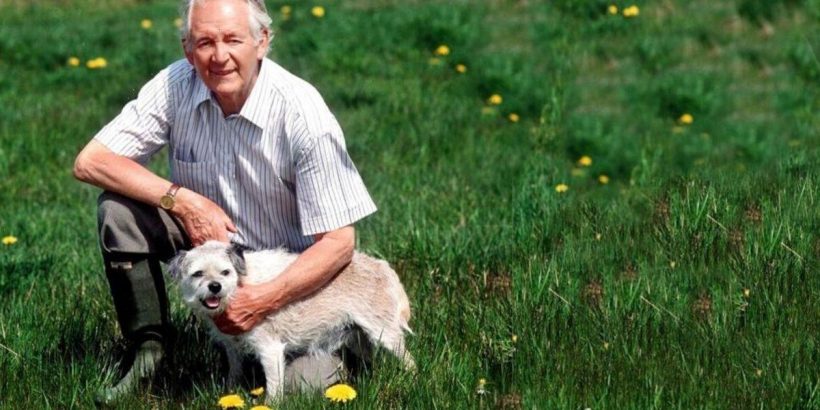 Alf Wight was a devoted father and a busy veterinary surgeon who spent many long days and nights driving around the hills of Yorkshire visiting his animal patients. As children, we often joined him on his farm visits, jumping into the car, always with a dog or two in the back, the cold, sweet-scented air of North Yorkshire all around.

We were there to help – to open and close gates, run back and forth to the car to fetch syringes or penicillin. Dad relished spending time with us, and we loved seeing him work.

Literary success under the pen name James Herriot did not happen until his fifties. But from an early age we learnt invaluable lessons that would later find their way into his books, not least that sows can be fearsome creatures, as Jim discovered aged 13 when he was trapped in a sty and one came roaring towards him, only to have Dad holler: “It’s no good being frightened of the bloody things!”

We spent hours driving around the hills of North Yorkshire – often having to jump out of our Austin A70 so Dad could coax it up the steep Sutton Bank – and then as teenagers, learning to drive along farm tracks, taking him on his rounds. But we loved it. Nothing can match the thrill of holding a new-born lamb or discovering a litter of kittens hidden in some straw.

Our father had first arrived in the town of Thirsk – fictionalised as Darrowby in his books – in 1940. He never lost his soft Glaswegian accent having spent the previous 23 years in the Scottish city and at the Glasgow Veterinary College.

Now he witnessed a community on the cusp of change, when rural vets spent their days on small farms, tending to cows in cobbled byres, birthing sheep in open fields or chasing piglets around rickety tin sheds.

Working all hours, he met an array of unforgettable characters, the main one being his long-time practice partner Donald Sinclair, immortalised as Siegfried Farnon.

While his job demanded most of his time, for many years he had dreamed of putting his experiences down on paper. At first he wrote short stories, tapping away at his typewriter in the evenings. After some gentle prodding from our mother, in 1965 he decided to focus on writing a full-length book.

Over the next 18 months, still working full-time and often at night, he crafted a novel based on his experiences. Publishers turned down The Art and Science, but he received encouraging advice from one of their readers: as his stories were clearly based on real events, why not write it in the first person?

Dad took to the idea enthusiastically and set about reworking his book into an account of his first year in veterinary practice. By the summer of 1968, it was finished, with the new title If Only They Could Talk suggested by a local dairy farmer.

Dad considered himself first and foremost a vet, which is why he went to some lengths to preserve his anonymity – the only change the publisher required was that he alter his pen name, because there was a practising vet called James Walsh. Dad’s alternative was inspired by the Birmingham City and future Scotland goal-keeper Jim Herriot. He also set the story in the Yorkshire Dales, 30 miles from Thirsk.

If Only They Could Talk, published in April 1970, would introduce Darrowby, the Dales, James’s erratic partner Siegfried and his younger brother Tristan, and many of the extraordinary individuals who would populate the books.

Most of the tales are based on real events. Like James Herriot, Alf fell asleep under an acacia tree in the garden while waiting for his interview; he too treated an indulged Pekinese dog with “flop-bott”; Siegfried’s arguments with his brother were just as explosive; and Tristan really did prang his brother’s beloved Rover. The first calving story – Dad face down on a cold floor, his arm deep in a straining cow for seemingly hours, without being offered so much as a cup of tea – was a real incident we remember him telling us about.

Our father was happy to be published but nervous about how people would react. He changed names and occasionally gender in a bid to disguise real identities, while some characters combined the traits of several individuals, but his descriptions and characters were often so well drawn that people couldn’t help but recognise themselves.

Generally, people were flattered; some were even annoyed if they were not included, as was the case with Mr Smedley, a little old man who came into the practice one day waving his stick and shouting: “Why haven’t you put me in your books, Mr Wight?”

Sales were steady but not meteoric. We had no idea then just how much people would grow to love his stories. By then Jim had himself qualified as a veterinary surgeon and joined the practice, and Rosie was well on her way to becoming a GP in Thirsk, but we would sit in the kitchen and joke with Dad, “OK, now you’ve had a book published, why not do a film?” We would roar with laughter about who might play him. I think we agreed the smooth-voiced Leslie Phillips could be perfect for Siegfried.

Dad had already begun working on a second manuscript and It Shouldn’t Happen To A Vet was duly published in January 1972. This book covered his second year in practice and introduced a new character: our mother, Joan Danbury, renamed Helen Alderson.

While our mother was happiest out of the spotlight, she was perfectly content to feature in the book. She was not a farmer’s daughter as Helen is, but so much else about their first few months together is true: the chaotic first dates, their small wedding in Thirsk and a working honeymoon testing cattle for tuberculin amid the meadow-sweet hills of the Dales.

A third book, Let Sleeping Vets Lie, was published in April 1973 and flew off the shelves. Vet In Harness followed in 1974 and by the time Vets Might Fly was published in 1976 Michael Joseph was printing in the region of 60,000 hardback copies, as they did for Vet In A Spin in 1977.

James Herriot was a household name and paperback sales were spectacular; by 1979 each of the first six books had sold more than a million copies – an achievement only then matched by 007 author Ian Fleming.

Having worked long hours throughout his life, just about keeping his head above water, the financial rewards were welcome – although money never motivated him. He continued to run the Thirsk practice with Jim. If he was reading the newspaper, he might mention one of his books was at the top of the bestseller list, but before anyone had time to respond he had have moved on to why Sunderland FC had not beaten Wolverhampton the previous Saturday.

Throngs of tourists had begun turning up at 23 Kirkgate, with queues snaking down the street on the two afternoons our father set aside to sign books. Dad felt he owed as much to his fans, especially those who had travelled from as far away as the US to see him. While visitors were principally there to see the real James Herriot, and were often overcome with excitement to meet him, they were also delighted if Donald Sinclair (better known to them as Siegfried) made an appearance.

By 1975 the idea we once laughed about – seeing Dad’s book on the big screen – became reality when the first movie of All Great Creatures Great And Small was released, with Simon Ward playing Dad and Anthony Hopkins starring as Siegfried, Dad was thrilled to see his little stories in movie theatres. Another film, It Shouldn’t Happen To A Vet, followed in 1976, this time with John Alderton as James Herriot and Colin Blakely as Siegfried.

Two years later the BBC aired the first television series, All Creatures Great And Small. It was a huge hit, regularly attracting 15 million viewers each week. Broadcast from 1978 to 1990, the seven series featured the virtually unknown Christopher Timothy as Dad, Robert Hardy as Siegfried, future Doctor Who, Peter Davison as Tristan, and Carol Drinkwater and then Lynda Bellingham as Helen.

Awards and honours also began to flood in for Dad, including an invitation to join Her Majesty for lunch later in the year, where he learnt the Queen was a fan and known to “laugh out loud” when reading his books. Dad continued to work full-time right up to 1980 when he was almost 65. Unlike other bestselling authors who chose to move abroad to avoid the 83 per cent top rate of income tax, he maintained: “I love living in Yorkshire among my friends and family”.

He always knew what made him happiest and was unaltered by success, writing: “It was during those hard days when I spent every waking hour dashing about the countryside, usually with my children in the car, that happiness seemed to steal up behind me and tap me on the shoulder.”

The seventh book, The Lord God Made Them All, published in 1981, was another bestseller. That year, Dad decided to put down his pen and spend more time with the family, his grandchildren, and the dogs who were his constant companions throughout his life. Despite his success as a writer, Dad was happiest when he was at home and always maintained he was “99 percent vet and one percent author”.

He insisted: “The farmers round here couldn’t care less about my book-writing activities. If one of them has a cow with its calf bed hanging out, he doesn’t want to see Charles Dickens rolling up!” In reality, many read his books and were quietly proud to have James Herriot as their vet.

Dad always felt fortunate to have met so many interesting people. They, in turn, enriched his life. His stories are full of such characters as well as Donald and Brian Sinclair, who are pivotal to the books. The pair could be frustrating and chaotic, but both were skilled vets.

Dad remained good friends with them. We still see several of the families and former clients in Thirsk today, rekindling precious memories of small farms that once dotted the landscape, the wonderful animals and a bygone world which Dad brought alive with skill and tenderness.

● Edited extract from The Wonderful World of James Herriot, published by Macmillan priced £22. To order for £19.80 with free UK P&P, call 020 3176 3832 or visit expressbookshop.com where you can get 10 percent off all James Herriot’s paperbacks.