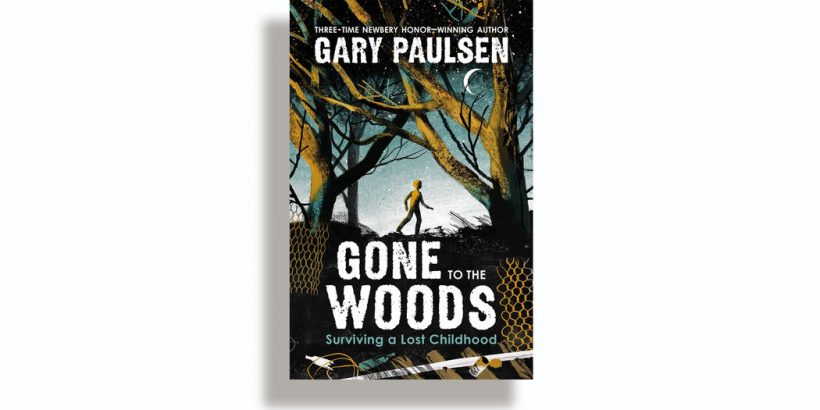 GONE TO THE WOODS
Surviving a Lost Childhood
By Gary Paulsen

Authors’ childhood experiences — no matter how joyous or upsetting — often lay the groundwork for their fiction. Gary Paulsen’s name is synonymous with gritty survivalist stories, so it should come as no surprise that his memoir, “Gone to the Woods,” leaves you gritting your teeth and clutching the pages. Paulsen, a recipient of the American Library Association’s prestigious Margaret A. Edwards Award for his lasting contribution to young adult literature, takes us inside his life story, where readers will quickly make connections to events in his novels, in particular his Newbury Honor-winning “Hatchet.”

Paulsen refers to himself throughout as “the boy.” There is just one moment, early on, when a character calls him “Gary.” While the boy spends most of the book escaping unfathomable traumas, “mind pictures” remain seared in his psyche. Writing a memoir is a fraught endeavor, and I can only presume that Paulsen chose this third-person device — which sometimes kept me at bay — as a form of self-care.

This isn’t to say the book is void of beautiful language or stunning detail. I was still lost in the story, rooting for the 5-year-old boy who boards a train alone in Chicago and rides 400 miles to Minneapolis surrounded by wounded soldiers returning from World War II, where his absent father (whom he won’t meet until he’s 7) has been serving as a low-level officer under General Patton. In Minneapolis he transfers to another train to travel hundreds of miles more — all to escape an alcoholic, irresponsible mother. (She would dress him in a uniform and drag him with her to bars, where she set him on tabletops to draw men to her by singing songs.) The boy’s scandalized maternal grandmother is the one who insists he go live with Aunt Edy, his mother’s younger sister, and her husband, Sig, in Minnesota’s North Woods.

Paulsen describes their homestead as “a fairy tale kind of farm.” It is here that the boy learns to work and survive off the land, and immerses himself in the wonders of childhood. Even in these sublime moments, I found my heart racing, knowing that while authors may craft fairy tales, they don’t always live them, because life doesn’t play out that way.

My heart broke as does Sig’s when the boy’s mother turns up unannounced, with a man she calls “Uncle Casey,” to take him away, first by train to California and then “across the ocean to be with your father in a place called the Philippine Islands.” (“The man named Casey … was not the boy’s uncle and would never be his uncle.”)

So many horrors befall this boy as he moves through his childhood and teenage years. While traveling by boat to the Philippines, he witnesses a plane crash, followed by a shark attack on the passengers thrust into the water. While in Manila, he hears heavy artillery being fired nightly and witnesses brutal killings. In North Dakota, where his usually drunken, fighting parents land next, he repeatedly runs away, before enlisting in the Army. These events haunted me as a reader, so I can’t begin to imagine how witnessing them with his own eyes has haunted the author.

Lessons from Aunt Edy and Sig help him survive, or at least buoy him until at 13 he first steps into the safe physical space of a public library, where a librarian puts a notebook and a sharpened pencil in his hands and encourages him to write down his “mind pictures.” This small act has echoed throughout his life, and enriched the lives of readers across generations.