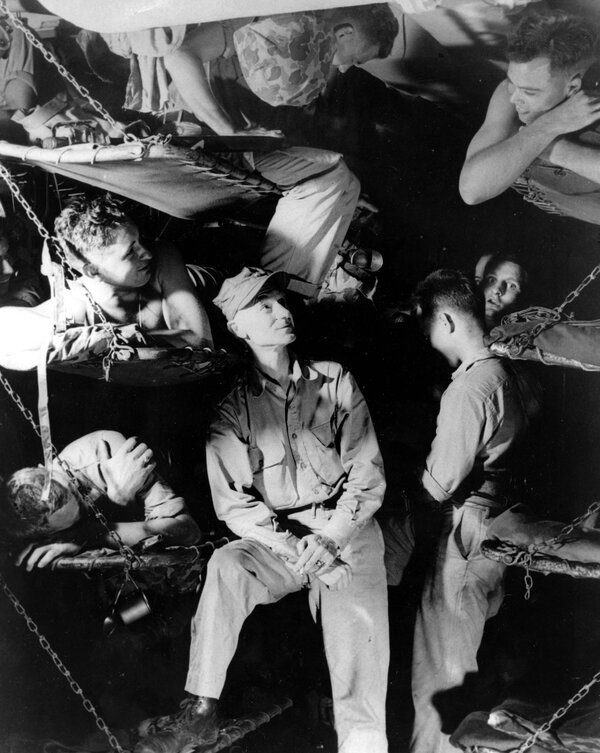 LOOKING FOR THE GOOD WAR
American Amnesia and the Violent Pursuit of Happiness
By Elizabeth D. Samet

Watching the tragic end of our withdrawal from Afghanistan, Americans could easily have forgotten that the war began in a spasm of triumphalism. Days after the attacks of Sept. 11, 2001, President George W. Bush pledged that Al Qaeda and its allies would “follow in the path of fascism, Nazism and totalitarianism” to “history’s unmarked grave of discarded lies.” Fast-forward 20 years. Abroad, the United States has been chastened in its post-9/11 wars. At home, American democracy is riven by division and endangered by creeping authoritarianism.

How did this happen? In her magisterial new book, “Looking for the Good War,” Elizabeth Samet, a professor of English at West Point, finds answers in the same historical wellspring that Bush tapped into: our mythologizing of war, particularly our triumph over fascism, Nazism and totalitarianism in the 20th century. Samet leaves little doubt about where she stands in the wording of the question that frames her book. “Has the prevailing memory of the ‘Good War,’ shaped as it has been by nostalgia, sentimentality and jingoism, done more harm than good to Americans’ sense of themselves and their country’s place in the world?”

We all know the prevailing memory of the “Good War.” Abroad, Americans from all walks of life came together to defeat tyranny and free the oppressed. At home, Americans were united in fidelity to the cause. And there is a cinematic quality to the images that Samet revisits, projected into our collective memory like a black-and-white newsreel: our troops distributing chocolate to children, receiving kisses from Frenchwomen and liberating concentration camps while the arsenal of democracy hummed back home. To Samet, this mythmaking reached its apotheosis around the turn of the century, with the publication of books by Stephen Ambrose and Tom Brokaw. It is hard not to blush a little when Samet quotes Brokaw’s declaration: “This is the greatest generation any society has ever produced.”

Of course, there is nobility in celebrating the U.S. victory in a just war and honoring those who served. Samet reaffirms that truth while forcing our attention on a more complicated reality. A sizable “America First” movement sympathized with aspects of Hitler’s ideology, which borrowed from our history of white supremacy. Americans were reluctantly drawn into war only after Pearl Harbor, and liberating the Jews was never a priority. Racism permeated our military forces — most obviously in mandated segregation, and in the restoration of Confederate war heroes in the naming of military facilities and the narrative of national greatness. In the firebombing of German and Japanese cities, the United States was indiscriminate in its use of violence. For U.S. troops who fought, the war was often something to be endured and not celebrated.

Samet draws on American voices who offered a more nuanced portrayal of the war and its meaning. She begins with reporters like Ernie Pyle, who embedded with U.S. troops and was killed in the Pacific in 1945. As early as September 1944, when it appeared the war in Europe had been won, Pyle was cautioning against triumphalism, blending his deep admiration for the Americans who fought with a reminder that our victory had many factors, including the enormous sacrifices of British and Soviet allies, and our vast natural resources. His words read like a prebuttal to the postwar brand of American exceptionalism. “We did not win it because destiny created us better than all other peoples.”

Much of the book elevates for praise Americans like John Hersey, Chester Himes, William Styron, Reinhold Niebuhr, Studs Terkel and Joan Didion, who wrestled with complexity and resisted mythmaking. Samet also focuses extensively on film, particularly postwar noir — movies like “Daisy Kenyon” (1947) and “Sudden Fear” (1952) — which centered on the disaffected veteran who cannot forget his past intimacy with violence. This version of the American antihero is ambivalent about organized society and accepts moral ambiguity. Samet makes a compelling case that “noir’s sordid world of drifters, grifters and con artists sounds a steady counterpoint to the mainstream Cold War narrative of American righteousness and self-satisfaction.” Still, the prevailing national story embraced the dangerous lesson that there is “an innate, exceptional goodness” in the use of military force by the United States — a false truth that anticipates Vietnam.

The downside of “Looking for the Good War” is that it occasionally becomes a bombardment of cultural references, as if Samet cannot help finding validation for her arguments everywhere; stretches of the book are devoted to film and book summaries. But the strength of this approach is to remind us that there has always been an alternative to the simplistic mythmaking around World War II and its impact on our national psyche. Instead of embracing a more realistic complexity, Samet maintains, we have been burdened by the impossibility of living up to a myth of our own construction. “We continue to search in vain for a heroic plot comparable to the one woven out of our experience in World War II.”

For all of its own intricacies, the Cold War did offer the outlines of such a plot. So it’s perhaps unsurprising that the re-emergence of World War II nostalgia embodied by Brokaw’s “The Greatest Generation” took place in the decade between the fall of the Soviet Union and the attacks of 9/11. And it’s clear that the more recent War on Terror was colored from the outset by World War II’s grip on our national consciousness, even if its reality has tracked closer to the nuanced accounts of war explored by Samet’s canon of countercultural voices.

The beginning of the Afghan war saw Al Qaeda cast as an heir to Nazism, a move that elided the differences between a totalitarian state and a terrorist organization. President Bush, in his effort to justify an invasion of Iraq, branded terrorist organizations, Iraq, Iran and North Korea as an “axis of evil,” repurposing the label given to World War II’s Axis powers despite the lack of any alliance among these forces, while reprising President Reagan’s casting of the Soviet Union as an “evil empire,” as if a patchwork of U.S. adversaries could be defeated by rhetorical clarity. Critics of these wars were likened to “appeasers”; arguments for a more restrained foreign policy drew comparisons to Neville Chamberlain’s ill-fated summit in Munich.

Samet has taught soldiers who served in 21st-century wars, and she forces us to confront the fact that these wars were consumed as myths back home. Even as a relatively small number of Americans served, the rest of the nation participated through flag lapel pins, flyovers at football games and feel-good videos of troops returning home (often before another deployment). Media outlets such as Fox News celebrated our military prowess while ignoring its limitations and vilifying the wars’ critics. As the promised victories failed to materialize, our culture became dominated by comic book movies and our politics were overtaken by an authoritarian movement with a nativist and nostalgic appeal: “Make America Great Again.”

A big and diverse nation like the United States inevitably encompasses the complexity and contradictions of humanity. This was on display in the final days of our war in Afghanistan. As young Americans at Kabul’s airport struggled to evacuate tens of thousands of Afghans who believed in the stories we told them about freedom and democracy, far more were left behind. The final known American act of violence was a drone strike that exemplified the reach of our military power but killed seven innocent children while serving no strategic purpose.

America’s victory in World War II should always be celebrated, particularly its defeat of fascism; a nation naturally seeks to embrace its best story as a source of common identity. But at a time when mythmaking and misinformation dominate swaths of our discourse, those scenes from Kabul remind us that we can only see the humanity in one another — whether it is an American soldier asked to make life-or-death decisions at that airport, or an Afghan child denied the most basic right to live — if we choose to live honestly in the world as it is.