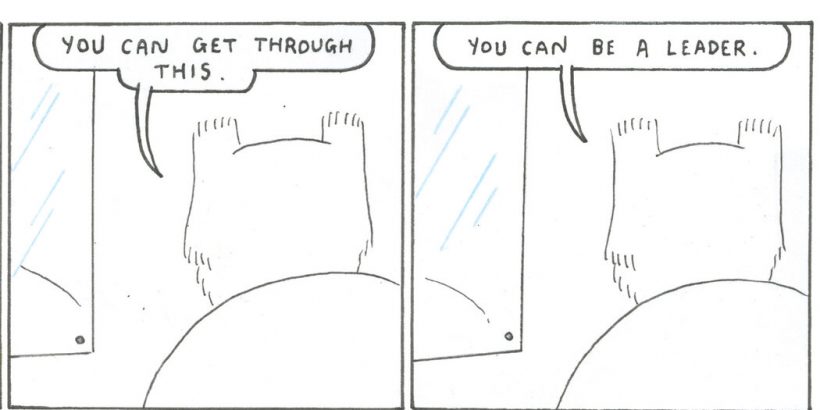 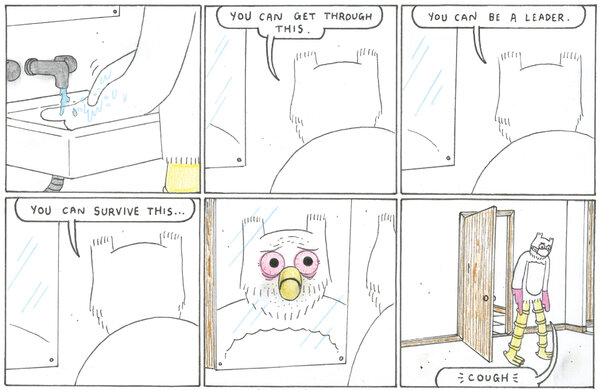 On social media this spring, the prolific Tasmanian-born cartoonist Simon Hanselmann trashed the shiny digital revenue sources (Patreon, NFTs) some artists embrace, telling fans to buy his actual books, and extolled the power of his medium in its bedrock, pen-and-paper form: “Comics are better than TV, better than the internet, the best of all the arts. Pure visions. Autonomy.”

The best of all the arts? Why not! CRISIS ZONE (Fantagraphics, 287 pp., $29.99), Hanselmann’s latest book, confidently shows what such visionary freedom looks like, and how the form’s immediacy is one of its chief virtues. Each page is a grid of 12 sparsely colored squares in which anything can happen: all manner of sex and violence, social commentary and unbridled drug use, scabrous wit and real tenderness. As in his previous five books, Hanselmann chronicles the lives of his reliably dissolute characters Megg (witch), Mogg (cat/boyfriend) and Owl (owl), and their many friends, lovers, offspring and enemies — roles that are subject to change every few pages.

At the outset of last year, Hanselmann was riding high from recent successes, and (as he muses in the endnotes) “2020 was set to be another banger!” — international travel, nonstop partying, following up his great 2019 book “Bad Gateway.” But, as we know, the coronavirus had other plans, locking down artists and audiences at home. Hanselmann pivoted to create what he calls that “repulsive thing,” a free serial webcomic, and figured the world would return to normal in a month. Instead Covid kept getting worse, and from March 13 to Dec. 22, Hanselmann kept putting his stable of timeworn miscreants through the wringer. This book emerged from that agonizing year.

It begins with Megg, Mogg and Owl at home as the outbreak grows more worrisome. Megg’s chief concern is that her Animal Crossing preorder will now be delayed: a perfect snapshot of early-pandemic cluelessness. Soon, the house is packed with uninvited (if masked) houseguests: Werewolf Jones and his two feral kids (bearing toilet paper), the green-scaled trans woman Booger, and the chill, mustached Mike (a Harry Potter fan). To uptight Owl’s dismay, Jones starts performing sex acts on camera for money. (“I lost my warehouse gig,” Jones says. “I don’t have a foofy ‘work from home’ type job like you.”) But when Owl himself gets axed — unbeknown to him, his work laptop has been capturing scenes of domestic depravity — he demands a cut of Jones’s new gig and dictates content.

Netflix then comes calling, turning the ménage into a hit reality show — the title is an NSFW variant on “Tiger King” — complete with spinoffs and reunions. In a great running joke, a boom mic edges into frame during a typically anarchic scene. Story lines sprawl, as characters go on side journeys. The pace is hectic, the dialogue nonstop. Hanselmann has a great ear for smack talk and a knack for the precisely deployed pop-culture joke. (Mogg gets involved with Mitzi, a Megg look-alike who gets “100% That Witch” tattooed on her face.) Surveying the hollowed-out, graffiti-scarred storefronts during a rare outing, Megg moans, “It’s like Twitter’s been smeared across every single surface.”

Hanselmann’s delicately colored characters — humans, monsters, animals — attack, have sex and torture each other with shocking regularity, but there’s something weirdly affirming about how ephemeral it all feels. If the stakes are low, the overall effect is — for readers who make it through — inspirational. Mortally wounded characters come back to life. All the original residents get Covid early on and survive. Born of generosity and desperation, “Crisis Zone” is the first great work of pandemic fiction.

In a strange way, “Crisis Zone” reminds me of Art Spiegelman’s “In the Shadow of No Towers” from 2004. A tall, heavy book printed on boards, it was partly a gathering of 10 edgy responses to the 9/11 attacks, and partly a love letter to comics. In the wake of the attacks, Spiegelman wrote, “the only cultural artifacts that could get past my defenses … were old comic strips; vital, unpretentious ephemera from the optimistic dawn of the 20th century.” It was those comics drawn on the grand scale of yore (e.g., Winsor McCay’s “Little Nemo in Slumberland” and R.F. Outcault’s “The Yellow Kid”) that were capable of conveying the magnitude of the twin towers, their destruction and all that came after.

“In the Shadow” was his last original book-length work for adults, which appeared 13 years after the second installment of “Maus,” his landmark graphic memoir of his parents, the Holocaust and intergenerational trauma. So it’s an unexpected treat to see him collaborate with the postmodern novelist Robert Coover on STREET COP (isolarii, 104 pp., $19.95), a palm-sized lark with a cover about a tenth the size of its predecessor’s. Coover plays with crime fiction tropes, mixing liberally with science fiction and horror. “Neighborhoods switched places,” Coover writes. “Printing whole streets in recyclable thermoplastics had become a commonplace, turning the city into a baffling maze. A safety measure against terrorism.” An Alexa-like A.I. named Electra guides the policeman protagonist through his surreal day.

Legendary characters run riot in Spiegelman’s tiny, dense drawings: The titular copper is Ernie Bushmiller’s Sluggo; Little Orphan Annie, Betty Boop, and Mutt and Jeff appear at a nude bar. “Street Cop” functions as a quasi sequel to “In the Shadow” in its fantastical description of a city transformed, and in its comics-history quotations and ultimately its layers of dread. Nowhere in the text does Coover indicate that he wants Dagwood Bumstead meeting the famed Crypt-Keeper of EC Comics, but Spiegelman goes back to this well of comics history because he knows where the sources of power lie.

The most visually stunning quarantine comic I’ve seen is THE DANCING PLAGUE (SelfMadeHero, 192 pp., $20.99), by the British artist Gareth Brookes. It takes its graphic cues from before the heyday of American newspaper comics — about 400 years before. To tell the story of a 16th-century dancing mania, in which the people of Strasbourg were afflicted with a pressing (even deadly) urge to boogie, Brookes studied the art of Bruegel and Bosch, who lived close to that time. More radically, he utilized a “heat pen” — a sort of soldering iron — to draw the scenes on calico. This pyrography conveys the flavor of a lost world: faint, uncertain (he has noted that the tools were “extremely unpredictable”) and just this side of ashes.