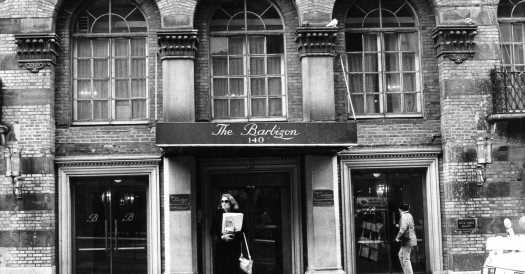 Moira Donegan’s review of “The Barbizon: The Hotel That Set Women Free” (April 4) brought back memories. In 1963, when I was newly graduated from Douglass Residential College, my dad allowed me to go to New York — only if I lived at the Barbizon.

Reference letters were required, preferably from a clergy member, and I remember my mother wondering why the same Renoir print appeared above the tiny bed in every room we were shown. Women could not wear slacks, even young female guests, and no men were allowed in rooms, even one’s father. The only celebrity residents of whom I was aware were Joan Crawford’s daughters. Each morning, I walked from 63rd and Lexington to the Time & Life Building at Rockefeller Center to work as a secretary at an advertising agency. Only young men were copywriter trainees.

I was one of those ambitious women referred to in Donegan’s review of “The Barbizon.” I moved into the hotel at its tail end, 1980, as a young Californian bent on a career in magazines (I eventually worked at Seventeen, Mademoiselle and Self).

I remember it, not fondly, for the mean old ladies roaming the halls in their nightgowns and the dreary demeanor of the whole place. Clearly, I’d missed its Grace Kelly-esque heyday. I spent my time trying to keep from falling apart by reading “Sophie’s Choice” and swimming in the Barbizon’s basement pool. Within a few weeks I’d moved to the Y.W.C.A., where, come to think of it, they weren’t that nice either.

In his book “Fulfillment,” Alec MacGillis follows a preconceived — and false — narrative about Amazon’s impact on the U.S. economy, at the expense of the facts. Xiaowei Wang’s review (April 4), like the book, somehow casts Amazon in the role of villain, ignoring the fact that Amazon has been a positive force in the U.S. economy, creating 400,000 much-needed jobs last year alone.

The truth is that Amazon has helped lift communities across this country with industry-leading pay and benefits — including a starting wage of at least $15 an hour — and invested billions in Covid-related initiatives to keep employees safe and deliver for our communities. We’ve invested more than $350 billion in the United States over the last decade, and have created millions of jobs through our investment and our support for small businesses and entrepreneurs using AWS, running delivery companies, building Alexa skills or selling in our stores. In fact, almost 60 percent of all physical product sales in our store are from small businesses.

The writer is senior vice president for global corporate affairs at Amazon.

Having It Both Ways

Despite the saying, comparisons are not necessarily odious. They can be helpful and illuminating. But I am afraid that Ben Libman’s essay on modernism (March 28) confirms it. I have absolutely no idea why anyone would want to resurrect, let alone subscribe to, one of Virginia Woolf’s worst moments, when she wrote some outrageously classist comments about the “self-taught working man” who wrote “Ulysses.” That comment should be allowed to die in peace. But to make it the basis for an argument is truly misguided. Surely there is a way to praise the fictions of 1925 without putting down the great modernist works of 1922 like “Ulysses” and “The Waste Land.”

To echo Woolf in calling those works “ultimately nauseating” is not doing a service to anyone, or to serious literary criticism. If the point is merely to say that modernism in literature was established over the decade of the 1920s, and not solely in 1922, when those two extraordinarily powerful and important works came out, why not just say that?

Certainly it is true, as Libman, citing the scholar Mark McGurl, says: Hemingway’s stories were extraordinarily important in the teaching of fiction-writing in creative writing programs. But why is it necessary to deny the influence of “Ulysses” and “The Waste Land” in order to make that (now quite familiar) point? Surely we can happily appreciate all these works and the influence that they had.

The writer is emeritus professor of English at the University of Chicago.