In 1921 T. S. Eliot teetered on the brink of a mental collapse. For two years he had been struggling at night to finish a long poem, while working by day in the foreign transactions department of Lloyds Bank. His neurologist — as they were then called in Britain — told Tom to get three months’ sick leave and then travel to Lausanne to see a leading psychiatrist. He did. His escape from London freed him from negotiating exchange rates and his unhappy marriage. While in Switzerland, he was able to complete his poem “The Waste Land.”

Eliot handed the text to Ezra Pound, whom he had met in 1914 when the two lived in London. Both were Americans — Tom from St. Louis, Ezra from Idaho — and both were modernists who sought to shatter all existing forms of poetry. It was Pound who had edited Eliot’s “The Love Song of J. Alfred Prufrock” and arranged for its 1915 publication in Poetry magazine. When the poem appeared in chapbook form two years later, it placed Eliot at the forefront of poetry’s avant-garde. 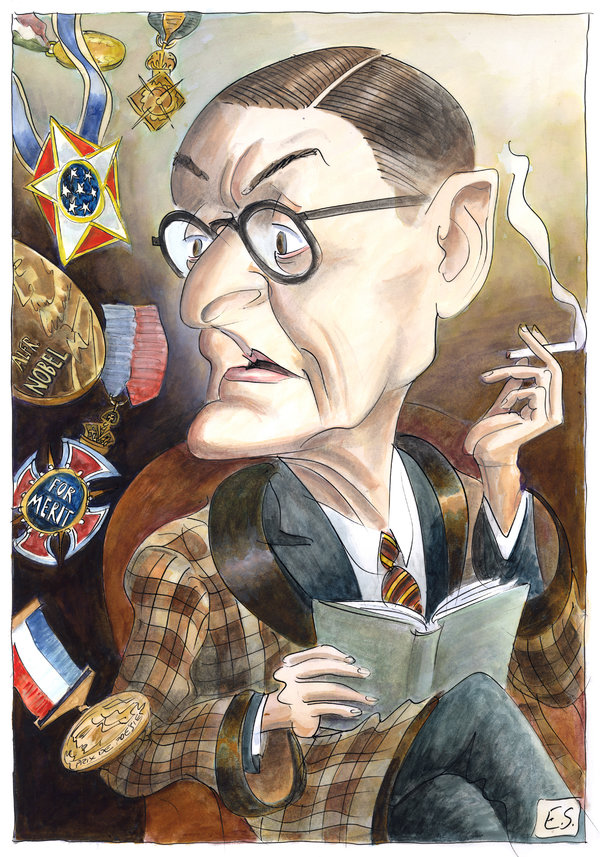 Now, in 1921, Pound edited “The Waste Land,” cutting down lines devoted to parody and eliminating witticisms, but leaving untouched its mood of despair and desolation, and its message of neo-Christian hope. Boni & Liveright published it in the United States, and Leonard and Virginia Woolf’s Hogarth Press printed it in Britain. Some critics greeted the poem with outrage, some with puzzlement at its sudden changes in location, time and narrator. It was not written to be easily understood, but the youth loved it for reflecting their disillusionment after the Great War. Before long it was decided — by the people who decide such things — that T. S. Eliot was the greatest poet of the 20th century.

In 1946 he was invited to Buckingham Palace to read for the king and queen. (But not his own verse, which Tom didn’t think the royals would understand.) Two years later he received the Nobel Prize and the British Order of Merit. Cambridge and Oxford made him an honorary fellow and 18 universities gave honorary degrees. France made him an Officier de la Légion d’Honneur, the United States gave him its Presidential Medal of Freedom and Time put him on its cover.

He should have been happy. But he had, as he himself said, “a Catholic cast of mind, a Calvinist heritage and a Puritanical temperament,” so how could he be?

Edward Sorel, a caricaturist and muralist, is the author and illustrator of “Mary Astor’s Purple Diary.”