These five new picture books are human-size stories made by human hands. The evidence: raw brush strokes, bleeding paint, pencil marks left untouched. Somehow that makes all the difference as the young characters in these stories try to find their way into the confusing adult world. The handmade artistry of these books helps to illuminate and animate children’s feelings of wonder, loss and determination.

The story in JiHyeon Lee’s wordless DOOR (Chronicle, 56 pp., $17.99; ages 4 to 8) starts on the frontispiece: A boy finds a key. A strange little insect leads him wandering among gray, drab people to a cobweb-draped door, apparently unopened for years. On the other side, they enter a land of blossoming trees, fantastical creatures, polka-dot food. The boy slowly sheds his grayness for pink, red and green. A bit Alice in Wonderland; but, truly, JiHyeon Lee, who gave us the delightful “Pool” (also wordless), is a unique and wildly imaginative talent — an original. The illustrations, in pencil, are whimsical, reserved, buoyant, childlike, expert. In a remarkable six-page layout of doors and doors and doors, we see worlds connect and intersect as creatures enter and exit, laughing, playing, even getting married. Language (dialogue is drawn in nonsense squiggles) isn’t a barrier. Neither are appearances. This land is a joyous celebration of differences and likenesses and harmony — and so is this magical book.

How could you not love a deliciously pink elephant named Poe? Unfortunately, the townspeople of Prickly Valley do not. In POE WON’T GO (Disney-Hyperion, 40 pp., $17.99; ages 4 to 8), written by Kelly DiPucchio and illustrated by Zachariah OHora, a rather large elephant has plunked himself right in the middle of the only road in town. This is a delightful children’s fable in the form of a humorous news story. The colorful illustrations look like retro linocut prints, while the hand-drawn text brings to life the atmosphere of panic in Prickly Valley. The townspeople try everything to get rid of Poe: They attempt to bribe him with cheese, they hire a magician to make him disappear, they tie a hundred balloons to his limbs. The mayor arrives with her committees and councils and Styrofoam cups and real-life politics.

In the end, throwing everything at the problem does not solve it — a little kindness does. It comes in the shape of a small girl, Marigold. She saves the day by asking Poe why he won’t go (in elephant of course). For the first time, Poe smiles. Marigold puts her ear to his forehead, listens carefully, then explains, “He’s waiting for a friend.” The friend is a monkey wearing a polka-dot tie. Poe tips his black fedora and leaves with the monkey on his shoulder. At the end of the story, the reader is asked, “I wonder where they’ll go?” (Let’s hope it is a wonderful place where animals gather in dapper get-ups.)

CARMELA FULL OF WISHES (Putnam, 40 pp., $17.99; ages 4 to 8) is the second collaboration between the author Matt de la Peña and the illustrator Christian Robinson following the beautiful “Last Stop on Market Street,” which won a Newbery Medal. In this one, it is Carmela’s birthday, and, for once, she is allowed to help her big brother outside with the chores. As she push-scooters after him jingling her bracelets, they pass a flower vendor’s van, a corn-on-a-stick (elote) stand and a Mexican bakery. We are in the streets of an immigrant neighborhood where hope and hardship mingle. It is a decoupage world, with muddy colors, sketchy details and brush stroke backgrounds: a child’s painting. The visuals, like the story, have a more muted and somber tone than “Last Stop on Market Street,” but it is moving in similar ways. Among the street’s cement paving stones, Carmela finds a lone dandelion. Her brother tells her to make a wish. Her wishes are cleverly illustrated as papel picados, Mexican hand-cut paper banners. 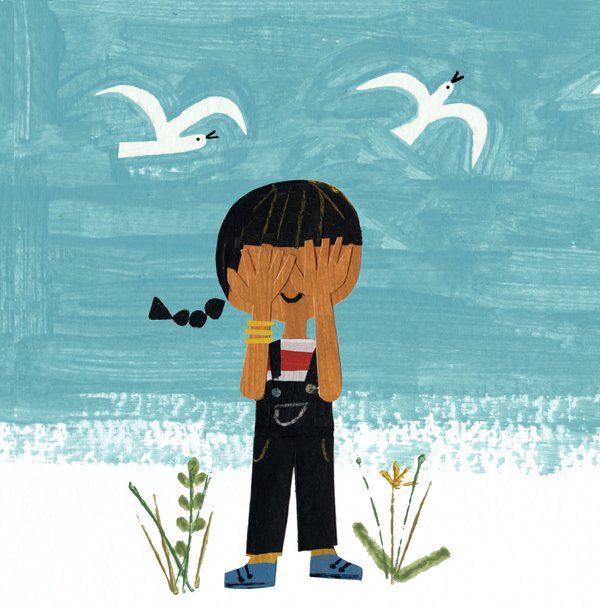 At first, she wishes for a machine that spits out candy. On second thought, she wishes for her father’s immigration papers to be fixed (so he can, finally, come home). She wishes for her mother to be pampered like a guest at the hotel where she works. Carmela drops her dandelion, and its spores scatter. She is distraught. She imagines her wishes and hopes will be lost and destroyed. Her brother, who is mostly irritated by Carmela, shows his true colors by taking her to the shore, where the sky is filled with dandelion spores and soaring white birds. A place of abundant wishes.

The illustrator Corinna Luyken helps bring Marcy Campbell’s characters to life in ADRIAN SIMCOX DOES NOT HAVE A HORSE (Dial, 40 pp., $17.99; ages 4 to 8). Chloe is determined to prove that Adrian Simcox, the lonely daydreamer in her class, is a liar. He has been telling “anyone who will listen that he has a horse.” Finally, after simmering for days, she bursts out (while hanging upside down from the monkey bars) to the whole class (including Adrian Simcox) that he does not have a horse. Adrian Simcox is devastated.

The next day, Chloe’s mother takes her to his house. He lives on the wrong side of the tracks with his grandparents. He plays alone in a decrepit, overgrown yard. Chloe wants to call him a liar again, but instead — she asks him about his horse. By using his imagination, Adrian Simcox comes to life and dreams of a better one. Luyken depicts nature as a wild whirlwind that eventually envelops the characters. She has a charming drawing style, but she also brings a jagged, emotional charge to the story. It is the charge of Adrian Simcox’s imagination — where the horse lives. Chloe is stubborn and willful, but she listens and learns and understands. Her first-person narration is realistic, witty and endearing. Chloe wants a series. This heroine is ready for more adventures.

In LIZA JANE AND THE DRAGON (Black Sheep, 32 pp., $16.95; ages 4 to 8), a first children’s book written by the novelist Laura Lippman and illustrated by Kate Samworth, Liza Jane has a not-so-unfamiliar problem: Nobody listens to her. Least of all her parents. So she fires them and puts up a wanted sign for new ones. Like Mary Poppins, a dragon answers her ad and gets the job. “Liza Jane and the Dragon” feels as if it were written in the 1970s, and it has the colors and the clothes and, of course, the psychedelic monster to go with it. At the start, Liza Jane and her fish, Swimmer, are the only characters who are colored in. Everything and everybody else is a sepia-wash background. The dragon brings excitement — color, fire, pizza every night — but he is not “Puff.” He is destructive and lazy. His only response each time he loses his temper and burns another part of the house to a charred crisp is, “Well, I’m a dragon.”

That’s a reasonable argument. We cannot change the essential nature of people or animals — especially mythical ones. Living in an untidy, charred ruin and sick of pizza, Liza Jane gets rid of the dragon and rehires her parents (now in color, too). This enjoyable book delivers a lesson, and its playful drawings invite the young reader into a wonderful place somewhere between fantasy and reality.

Juman Malouf is the author and illustrator of “A Trilogy of Two.”