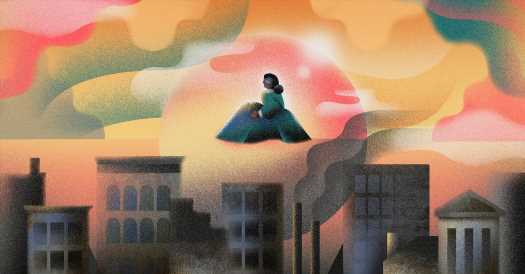 The story starts out with a kind of resurrection: A young Libertie’s mother is on the receiving end of an enslaved man’s transport to freedom — inside a coffin. War is not far behind them, but Libertie and her mother are both freeborn. Based on Susan Smith McKinney Steward, the first Black female doctor in New York State, Libertie’s mother founded a clinic in an “all-colored” town called Kings County. Though her mother is light enough to pass, Libertie is so dark-skinned that Ben Daisy, the man in the coffin, endearingly calls her “Black Gal.” The young Libertie worships her mother, spending hours working at the clinic and envisioning riding around with her in a horse-drawn carriage inscribed with “Dr. Sampson and Daughter” in gold. She gazes at her mother when she’s treating her patients, watching for “that look she always got when she left this world and entered the one of her mind.” She knows her mother hasn’t forgotten her only when she offers her child her own mug, “because she knew that I believed that the sweetest drink in the world came from the dregs of a cup she had drunk from.”

Greenidge shines in occupying the young girl’s mind, as when Ben Daisy early on criticizes his new, Northern surroundings. “I nodded politely,” she narrates, “not committing to my guest’s belief but trying to be neighborly, which is what we learned in Sunday school.” The child persists in believing her mother has raised this man from the grave, and prays and writes songs to his dead lover, who she believes lives at the waterfront.

This early period is enhanced by apt and tender dialogue, like the “practiced quarrel” between Libertie’s mother and her friend. Indeed, the world of Kings County — modern-day Brooklyn — comes to life through vivid, textured details about the children who coined Ben Daisy’s nickname after the dead woman who broke his heart; Culver’s pharmacy, where the newly escaped congregate in the back room; and Pinkster, an antebellum-era tradition in which the townspeople crown a “King Charles” to tease the children and parade for the elderly.

The story has a motor too — Ben Daisy goes on to hold a prominent role in the narrative as Libertie’s mother attempts to heal him of the mental and spiritual effects of enslavement. This attempt to save him goes awry in a manner at once magical and yet natural in Greenidge’s able hand — a story line reminiscent of one in “Beloved,” when the title character arrives and entraps Paul D.

Ben Daisy’s path to freedom hovers over the rest of the Black characters in the Reconstruction-era North: Will Libertie find her own namesake, in a spiritual sense? Will liberty cause her to ache as it did for Ben Daisy? Will she be able to find a cure for this ache anywhere besides home, where she felt bound?

Over time, a not entirely developed rift springs up between Libertie and her mother, as Ben Daisy’s fate leads the protagonist to associate care with monstrosity and pain: “Mama had told me freedom would come by following her, and I had known it was not true for a long time.” When Libertie assists her fair-skinned mother in treating white women with gynecological issues they are “embarrassed” of, they flinch and scowl at the daughter’s dark skin. “Mama was light enough that the white women did not feel awkward when her hands touched them,” Greenidge writes, in just one example of her nuanced and measured treatment of colorism. “But I’d touched that white woman with a knowing of what was deepest inside her, and she’d recoiled — it was beyond her imagination.”

As Libertie attends Cunningham College in Ohio and meets two women who perform as “the Graces,” she accepts — through singing with them and tapping into their passion — that she never wanted to practice medicine after all. Still, even as she travels home, having arranged for the Graces to sing for the Black community in Brooklyn, she is full of dread that her mother will find out about her academic failure.

There is a bit of a lull in Ohio. Libertie’s self-pity is presented in a repetitive and stunted monotone that can read as indulgent. But Libertie’s mother has taken on a new apprentice, Emmanuel, a handsome, bright recent medical school graduate from Haiti. The two meet, and the book swells again with cautious hope as the attraction between Libertie and Emmanuel carries her to his home in Jacmel.

For all Emmanuel’s assurances — that Haiti belongs to the Black man, that “none of us will ever triumph … until we are completely free,” that he and Libertie will have a “companionate marriage,” because “it is only logical that a man and wife should share friendship and charity and understanding” — the reality of her future looks quite different. The ship ride there is not unlike a honeymoon, and yet so reminiscent of Octavia Butler’s “Wild Seed” that any reader familiar with that work will know to suspect that true equality between the husband and wife might not be possible.

As lushly as Kings County is described, Greenidge grants the same favor to Jacmel, and despite the American filter, we can’t help hearing echoes of Edwidge Danticat in the line “the market was a kingdom of women,” or in the Haitian Creole tune the children make up for Libertie upon her arrival, because, Emmanuel explains, “anything here that happens at midnight is known by dawn. And by morning, the neighborhood has turned it into a song.” Still, the rich local color stands in conversation with the confinement of standard gender roles — recalling Janie in “Their Eyes Were Watching God.” In this way, Libertie’s fate represents an ingenious nod to the unity of the African diaspora.

As with Janie, it soon becomes clear Libertie has run away from, not toward, something. Greenidge leans into the ache of this mother-daughter rift with heartbreaking, deeply rendered letters from the older woman finally declaring what she was unable to convey in Libertie’s adolescence.

Through a series of revelations, discoveries and Dickensian coincidences, Libertie ultimately decides the promises of Jacmel come with too high a price. “Was freedom worth it if you still ached like that?” she asks. “If you were still bound on this earth by desire?” Was it actually even freedom at all? For Ben Daisy, who in a way never actually escaped his captivity, the answer was no. But Libertie may be able to invent a new world, an autonomy within herself that extends outward no matter which home she claims. At the end of the novel she writes to her mother that she has only “almost reached the garden.” The sheer force of Greenidge’s vision for her, for us all, gives us hope that it won’t be long now.