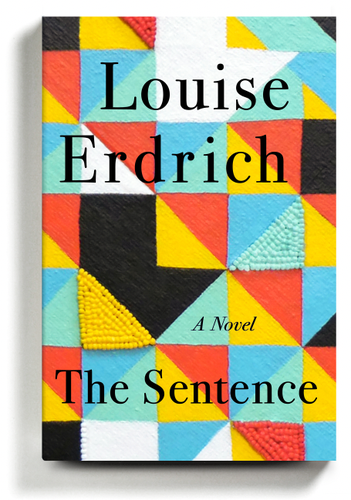 Who among us hasn’t, in some sense, stolen a corpse and accidentally trafficked crack cocaine across state lines? That is a question you will ponder while reading Louise Erdrich’s “The Sentence,” a bewitching novel that begins with a crime that would seem to defy “relatability” but becomes a practical metaphor for whatever moral felonies lurk unresolved in your guilty heart.

Tookie is the criminal in question. She is “an ugly woman,” an Ojibwe woman and a woman who is indicted after bundling a dead man in a tarp and delivering the body, to which crack is covertly duct-taped, in a refrigerated truck to one of her friends. Tookie’s reasons for doing so are stupid but not evil — a defense that has not, historically speaking, held up in courts of law. She gets 60 years.

After a decade, the sentence is commuted and Tookie gets a job at a Minneapolis bookstore that specializes in Native culture. (She’s hired on the strength of her intimidating presence: black eyeliner, black stompers, nose ring, eyebrow cuff. “Who would dare not buy a book from me?” she asks, both rhetorically and correctly.) Four years after Tookie takes the job, the bookstore’s most annoying customer, Flora, dies. Five days after that, Flora’s ghost wanders into the shop and commences tormenting Tookie.

As a living presence, Flora’s extreme annoyingness stemmed from her obsession with all things Indigenous, as well as her claim that she was “an Indian in a former life.” (She seems to be fully white.) When that line fails to convince any of the bookstore employees, Flora unearths a photograph of a great-grandmother whom she presumes to be Indigenous based on the evidence that the woman wears a grim expression and a shawl in her portrait. “The woman in the picture looked Indianesque, or she might have just been in a bad mood,” Tookie concludes with characteristic wryness (Erdrich is a terrific summoner of vexed and charismatic heroines, and Tookie is no exception).

The circumstances of Flora’s death are peculiar: She dies at 5 a.m. for seemingly no reason, with a book splayed open beside her. The book — an antique journal with handprinted endpapers and spidery writing in gray-blue ink — takes on the quality of a murder weapon when Flora’s foster daughter thrusts it into Tookie’s hands one day, noting the section where her mother left off reading.

When Tookie settles down to decipher the book, she finds a 19th-century captivity narrative, though not of the white-woman-kidnapped-by-Indians variety. It appears to be the opposite: a Native woman abducted by whites. Interesting, Tookie thinks. But she’s too scared to continue reading. What if the lethal sentence that took out Flora comes for Tookie, too? In recourse, she finds a can of lighter fluid and attempts to burn the book on an outdoor hibachi grill, where it resists destruction. She takes a hatchet to the book, with the same result. Finally, she shovels a hole and buries the cursed text in her backyard, then goes inside to thaw a block of soup and do crunches. But the object will not vanish, and neither will Flora. What first seems like an aimless haunting turns out to be a deadly accurate supernatural missile-strike. Flora wants something, and only when Tookie decodes what it is can she exorcise the woman’s malevolent presence.

Amid all this, the pandemic arrives. Spring dribbles in. Milkweed rises from the earth. Pine trees push forth tender new bundles. George Floyd is killed by police near the Cup Foods where Tookie’s husband stops to buy a thing or two on his way home. Protests erupt. The musky chalk smell of tear gas clouds the air. The bookstore is slammed: “Everyone who wasn’t out on the streets wanted to read about why everyone else was out on the streets.” Time dissolves. One section of the book is given the dateline of “May 34.” Threaded through the chronological plot are dreams, memories, hauntings and other types of temporal mayhem.

As its title suggests, “The Sentence” is an incredibly bookish book. The layers of bookishness are dizzying: from the micro (one employee’s name is Pen) to the macro (the central mystery: Was Flora killed by a book?). This is a novel obsessed with the operations of running an independent bookstore: dealing with publishers, playing the Tetris game that is shelf space, packaging mail orders. Erdrich owns an independent bookstore called Birchbark Books in Minneapolis, which shares some similarities with the fictional store — including a proprietor named Louise and a confessional booth. On the (real) bookstore’s website, a note explains that the confessional was rescued from a previous life as a sound booth in a bar, and that “Louise is currently collaging the interior with images of her sins.”

“The Sentence” is injected with literary criticism, and features an appendix containing the favorite books of its main character. That appendix itself is divided into themed sub-lists, and across those sub-lists are multiple books that are, themselves, about books. The novel starts and ends with Tookie consulting a dictionary. It is books all the way down.

It’s also Erdrich all the way down. In a paper published 30 years ago, the scholar Catherine Rainwater observed that Erdrich’s books are filled with “extreme cases of code conflict.” These include the rifts between industrial and ceremonial time; Christian theology and shamanic religion; the nuclear family and tribal kinship structures. “The Sentence” finds its protagonist squeezed into a space like that between the rough and soft sides of a Velcro closure. Tookie can’t square her husband’s affiliations — he’s a former tribal policeman — with her own experiences of state-inflicted violence; nor can she reconcile her sense of physical strength with her mental permeability.

Erdrich, who won the Pulitzer Prize for her 2020 novel “The Night Watchman,” once referred to books as “a perfectly evolved piece of technology,” like bread. Her newest is strange, enchanting and funny: a work about motherhood, doom, regret and the magic — dark, benevolent and every shade in between — of words on paper.