A few years ago, Mark Brandi was in the habit of taking his parents to lunch each week in Richmond.

Over time it struck him that the drug problem there was getting more intense – more open dealing on the streets and more overdoses – and all this was less than one kilometre from the CBD. As he puts it, two worlds existing side by side. 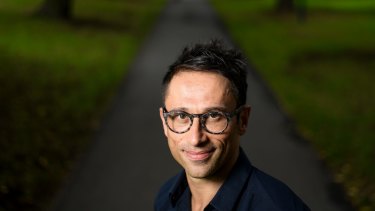 Mark Brandi is more intrigued by books that examine the individual and the crime rather than the whodunit aspect of villainy.Credit:Justin McManus

When Brandi, who for many years worked in the criminal justice sector, thinks about crime, when he writes about crime, and when he reads about it, it's the social context that fascinates him.

So in his latest novel, The Rip (the follow-up to his award-winning debut, Wimmera, that focused on the sexual abuse of children and its consequences and aftermath), he didn't start out with a crime. He started out with his homeless, drug-addicted narrator, waking in her regular spot under the grandstand at the Carlton football ground in Princes Park. 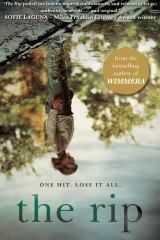 The Rip. By Mark Brandi.

She's with her amiable dog, Sunny, her good friend Anton and they're struggling to survive on the streets, to find money for food and – more important – money to score. She turns tricks to get the cash.

`It doesn't fit the typical conventions of a crime novel," says Brandi, “it's not a procedural with an investigator."

Things take a turn for the worse when the two meet up with Steve, an old acquaintance of Anton's who offers them somewhere to stay. Anton starts doing "burgs" with him, she starts begging and there's a disturbing chemical smell emanating from Steve's room.

Even in fiction, Brandi is more intrigued by books that examine the individual and the crime rather than the whodunit aspect of the villainy. That's why books such Albert Camus' The Stranger and M.J. Hyland's This is How appeal to him.

"In the Camus, that man was condemned more for not crying at his mother's funeral than for shooting the Arab on the beach. It's character development that I find interesting. A complex character will hold me."

The Rip – the title refers to how drug addiction sucks you in and sweeps you into peril – is narrated in the first person and is written in the present tense, which Brandi admits he found tricky.

"There is a constraint. She's street-smart and quite perceptive, but she's not overly sophisticated. Her vocabulary is limited. It was very intense to write, to go into her world and see things through her eyes."

But the advantage of the novel as a form, Brandi says, is that it allows you to go deeply into any world. "I read a lot about heroin, homelessness and addiction in the media and you often get a very two-dimensional view."

While he says he doesn't want his latest novel to be in any way prescriptive – what you get from your reading, after all, is a very personal experience – if there is any tiny sort of message in The Rip it's about how people treat those who are less fortunate.

There's a moment in the book when the narrator talks about the looks she and Anton get from some people when they're on the streets: "Anton says it's pity, and he reckons pity is about the worst insult you can get. He's probably right about that. It's definitely worse than the looks from the young mums."

According to Brandi, "It's about the small actions, the small things that add up in terms of her self-worth. Our imagination can fail us, it's often too overwhelming to place us in a situation. Being in that place can provoke incredible despair. It's a deeply humanising experience."

He didn't have to research to create the world of The Rip. He puts his knowledge down to osmosis from having worked in the sector – "many of the people in prison are or have been injecting drugs" – and having lived all his adult life in the inner city where that world is impossible to avoid.

He said it felt right to make his narrator a woman even if he didn't see her situation principally through her gender and points out that writing fiction is an exercise in imagination and empathy and going into a world that isn't your own.

"Her circumstances had to define her more – the socio-economic world and her addiction. As I was writing it, I did become more aware of her gender and her vulnerability. But it was important that she had agency, that she was strong and she didn't see herself as a victim."