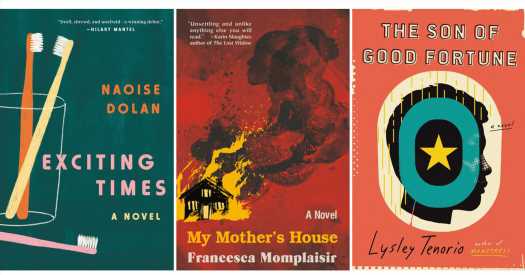 EXCITING TIMES, by Naoise Dolan. (Ecco, 256 pp., $16.99.) “Jealousy and obsession, love and late capitalism, sex and the internet all come whirling together in a wry and bracing tale of class and privilege,” our reviewer, Xuan Juliana Wang, wrote of this novel about “Anglophone transplants” to Hong Kong who “work and party there” but “barely notice the Chinese characters on street signs.”

MY MOTHER’S HOUSE, by Francesca Momplaisir. (Vintage, 304 pp., $16.) This debut novel is narrated from three perspectives: a Queens house on fire (its walls “talk, scheme and ultimately give in to an impulse to self-destruct”), its Haitian owner and a mysterious woman living in the basement. Our reviewer, Stephanie Powell Watts, called it “an ambitious attempt to tell a story of despotism and terror, toxic masculinity and survival.”

THE SON OF GOOD FORTUNE, by Lysley Tenorio. (Ecco, 304 pp., $16.99.) A single mother who scams men on dating sites and was once a low-budget-Philippine-action-movie star informs her American-born son on his 10th birthday that he is undocumented. Our reviewer, Madeline Leung Coleman, declared this novel of the Filipino diaspora in California “an affecting portrayal” of “how potently a parent can shape the expectations of her child.”

THE BOMB: Presidents, Generals, and the Secret History of Nuclear War, by Fred Kaplan. (Simon & Schuster, 384 pp., $18.) This “rich and surprisingly entertaining history” of how nuclear weapons have shaped United States foreign policy, according to our reviewer, Justin Vogt, makes use of newly declassified material and a wealth of insider interviews.

LEAVE ONLY FOOTPRINTS: My Acadia-to-Zion Journey Through Every National Park, by Conor Knighton. (Crown, 336 pp., $17.) After his fiancée called off their engagement, the “CBS Sunday Morning” correspondent visited 59 national parks. Our reviewer, Sebastian Modak, hailed his book as “one upbeat, observant man’s emotional and physical journey through some of the most beautiful places in one very large country.”

IN PURSUIT OF DISOBEDIENT WOMEN: A Memoir of Love, Rebellion, and Family, Far Away, by Dionne Searcey. (Ballantine, 304 pp., $18.) By interviewing rebels such as a woman abducted by Boko Haram who ran away from suicide bomb school, our reviewer, Fiammetta Rocco, pointed out, The Times’s then West Africa bureau chief showed herself, too, to be commendably “disobedient.”