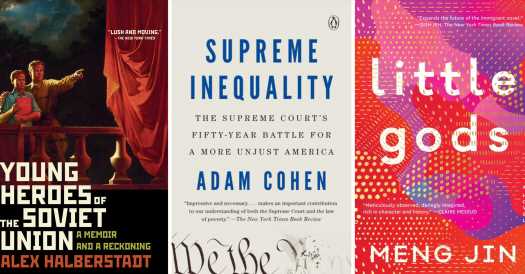 YOUNG HEROES OF THE SOVIET UNION: A Memoir and a Reckoning, by Alex Halberstadt. (Random House, 320 pp., $18.) Titled after his first-grade history textbook, Halberstadt’s “lush and moving” account of his family and the country where he was born, the Times book critic Jennifer Szalai noted, is also “skeptical, surprising and often very funny.”

SUPREME INEQUALITY: The Supreme Court’s Fifty-Year Battle for a More Unjust America, by Adam Cohen. (Penguin, 448 pp., $18.) While wishing that Cohen, a former member of the Times editorial board, had ended his “sweeping” judicial analysis with reforms rather than “lamentations,” our reviewer, Kenji Yoshino, called his argument — that “after it turned to the right in 1969 … the court also turned on the poor” — “impressive and necessary.”

LITTLE GODS, by Meng Jin. (Custom House, 320 pp., $16.99.) This “ambitious” debut work of fiction about a young woman’s “galvanizing” excavation of all that her mother, a brilliant Chinese physicist, buried — including the truths of her daughter’s parentage — “expands the future of the immigrant novel,” our reviewer, Gish Jen, observed, “even as it holds us in uneasy thrall to the past.”

HITTING A STRAIGHT LICK WITH A CROOKED STICK: Stories From the Harlem Renaissance, by Zora Neale Hurston. (Amistad, 304 pp., $17.99.) Presented in the order in which Hurston composed them, these 21 stories by the author of “Their Eyes Were Watching God” show her progression as a writer, according to our reviewer, Jabari Asim, as well as her “exemplary fidelity to idiomatic speech” and “irresistible engagement with folklore.”

DEAD TO HER, by Sarah Pinborough. (Morrow, 416 pp., $16.99.) “I don’t think I’ve ever worked a case where my problem was having too many suspects who could all easily be guilty,” a detective remarks in this “twisty” upper-crust thriller set in Savannah, Ga. “The issue I have is … that you’re all such truly atrocious people.” To the delight of our reviewer, Sarah Lyall, Pinborough doesn’t reveal “the very worst villain” until “the very end.”

SUMMER SNOW: New Poems, by Robert Hass. (Ecco, 192 pp., $16.99.) “Some may find that Hass has grown too comfy in his effusive style and his old lefty politics,” our reviewer, Craig Morgan Teicher, conceded about Hass’s first collection of new work since 2010, “but to me it all sounds like mastery, like singular virtuosity attained on a very popular instrument — common American speech.”