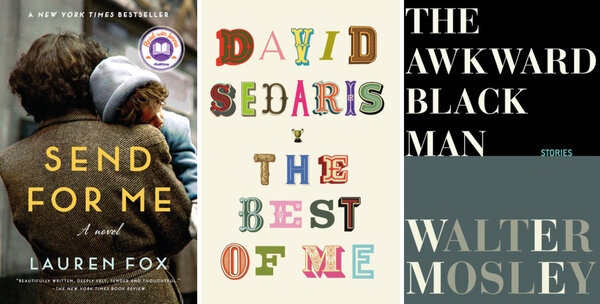 SEND FOR ME, by Lauren Fox. (Vintage, 272 pp. $16.95.) Fox’s fourth novel, which includes excerpts of letters from her great-grandmother to her grandmother, follows a young Jewish woman in 1930s Germany who leaves her parents behind when she and her husband and young daughter move to the United States to escape the Nazis. Our reviewer, Claire Lombardo, called the author’s prose “rhythmic and gorgeous.”

THE BEST OF ME, by David Sedaris. (Back Bay, 400 pp. $18.99.) Our reviewer, Andrew Sean Greer, read the droll raconteur’s latest book — essays that are mostly about family and love — on a plane, while medicated. Yet in the “non-narcotic light of day” he stood behind the final note he’d jotted in its margins, despite the comment’s oddness regarding a collection: “This is the best thing Sedaris has ever written.”

THE AWKWARD BLACK MAN: Stories, by Walter Mosley. (Grove, 352 pp., $17.) While noting that Mosley “delights in the wonderfully bizarre,” our reviewer, Rion Amilcar Scott, still marveled at the surprising secrets harbored by the variously quirky men who populate these yarns: “Each protagonist seems simple and often shallow on the surface, but as the story progresses he unfurls into greater and frankly breathtaking complexity.”

PIRANESI, by Susanna Clarke. (Bloomsbury, 272 pp. $17.) That Clarke (“Jonathan Strange & Mr. Norrell”) has been housebound due to a chronic illness, our Otherworldly columnist, Amal El-Mohtar, observed, “further illuminates the secluded world” of this timely fantasy novel, which views confinement through “a filter of marble and gold, of rushing ocean, of tenderness and love.”

JFK: Coming of Age in the American Century, 1917-1956, by Fredrik Logevall. (Random House, 816 pp., $20.) In the words of our reviewer, David M. Kennedy, no one “has told the tale of the 35th president’s formative years better or more thoroughly” than Logevall, a Harvard history professor, in this first of two projected volumes, which concludes with Kennedy’s failed bid for the Democratic vice-presidential nomination.

THE BOY IN THE FIELD, by Margot Livesey. (Harper Perennial, 272 pp. $16.99.) The “real mysteries” of this novel about a boy left for dead in a field lie not with who attacked him but with the characters who witnessed the crime, according to our reviewer, Jenny Rosenstrach, who described Livesey’s writing as “so cinematic you can hear the orchestral soundtrack as you tear through the pages.”