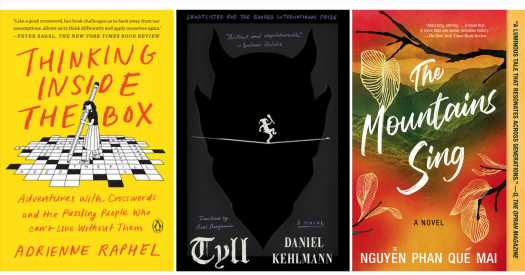 THINKING INSIDE THE BOX: Adventures With Crosswords and the Puzzling People Who Can’t Live Without Them, by Adrienne Raphel. (Penguin, 304 pp., $18.) This affectionate analysis of a cultural fixation that in 1924 The Times dismissively compared to “the temporary madness that made so many people pay enormous prices for mahjong sets” succeeds — our reviewer, Peter Sagal, argued — because “like a good crossword” it challenges us to “back away from our assumptions,” “think differently” and “apply ourselves again.”

THE MOUNTAINS SING, by Nguyen Phan Que Mai. (Algonquin, 368 pp., $16.95.) “With a poet’s antenna for beauty in the most desolate circumstances,” our reviewer, Gaiutra Bahadur, wrote, Que Mai’s “stirring” first novel in English bears witness to the “unspeakable events” of 20th-century Vietnamese history, communicated across generations via deathbed letters and “diaries read surreptitiously.”

OUR REVOLUTION: A Mother and Daughter at Midcentury, by Honor Moore. (Norton, 432 pp., $18.95.) The eldest of nine children, stranded in “a wilderness of hunger” for attention, Moore waited until her 70s to mine the interior life of her mother, the “gifted, complicated” Jenny McKean. The result, our reviewer, Janny Scott, noted, is a “searching,” “ruminative,” “sometimes lyrical” memoir of their relationship.

TROOP 6000: The Girl Scout Troop That Began in a Shelter and Inspired the World, by Nikita Stewart. (Ballantine, 288 pp., $17.) While our reviewer, Samuel G. Freedman, cited the outsize celebrity support generated by the 2017 article on which this book is based, he praised the journalistic “rigor” with which Stewart, a Times Metro reporter, “problematizes the myth” of a fairy-tale ending, “relentlessly returning to the debilitating chaos of homelessness itself.”

SORRY FOR YOUR TROUBLE: Stories, by Richard Ford. (Ecco, 272 pp., $16.99.) Ford’s mostly middle-aged-male protagonists experience “jarring dislocations,” imposed by divorce or death, and grapple with relinquishing “the sense of an overarching narrative in their lives.” As our reviewer, Rand Richards Cooper, put it, “These are stories about the death of stories.”