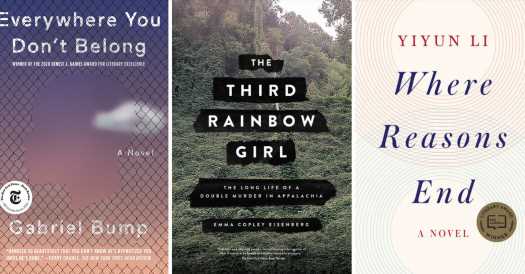 EVERYWHERE YOU DON’T BELONG, by Gabriel Bump. (Algonquin, 288 pp., $15.95.) It’s “the rare book” that can be funny describing essentially sad moments like trauma and loss, our reviewer, Tommy Orange, said, but this novel about growing up on Chicago’s South Side achieves the appropriate balance between heaviness and levity, while also providing “social commentary at its finest.”

THE THIRD RAINBOW GIRL: The Long Life of a Double Murder in Appalachia, by Emma Copley Eisenberg. (Hachette, 336 pp., $17.95.) An investigation by the author into an unsolved crime turns into a portrait of a small rural community that has been nearly torn apart trying to cope with the lingering memories of the case. Our reviewer, Melissa del Bosque, called the narrative “evocative and elegantly paced.”

WHERE REASONS END, by Yiyun Li. (Random House, 192 pp., $16.) An imagined conversation between a grieving mother and her 16-year-old dead son forms the core of this novel. Lauren Oyler said in these pages that “the humor in this book is subtle yet potent,” and that Li, who lost her own son to suicide, has written “an interrogation of form — an exploration of what fiction can do and what it can’t.”

WHY WE CAN’T SLEEP: Women’s New Midlife Crisis, by Ada Calhoun. (Grove, 288 pp., $16.) Beginning as an article for O Magazine that went viral, this book looks at a generation of apparently successful women — those born between 1965 and 1980 — who are secretly leading troubled lives, worrying about what they’re doing wrong. According to our reviewer, Curtis Sittenfeld, Calhoun is “a funny, smart, compassionate narrator.”

FIGHT OF THE CENTURY: Writers Reflect on 100 Years of Landmark ACLU Cases, edited by Michael Chabon and Ayelet Waldman. (Avid Reader, 336 pp., $17.) The editors of this anthology asked 40 writers, including Scott Turow and Brit Bennett, to reflect on cases, both prominent and forgotten, that led our reviewer, Monica Youn, to praise the A.C.L.U.’s “many indisputable acts of heroism.”

THE SECRET GUESTS, by Benjamin Black. (Picador, 304 pp., $17.) Black, a.k.a. John Banville, imagines King George VI shipping his young daughters, 14-year-old Elizabeth and 10-year-old Margaret, to Ireland during World War II to protect them from the Blitz. Our reviewer, Daisy Goodwin, called the novel “a mordant observation of the palimpsest of arrogance and resentment” surrounding Britain’s dealings with its neighbor.