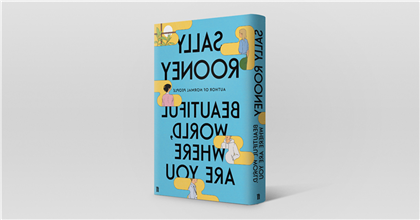 With the release of the illustrated cover for Sally Rooney’s new novel, ere’s everything we know about Beautiful World, Where Are You, which will be published in September 2021

I’m sure we can all agree that BBC Three’s televised adaptation of Sally Rooney’s novel Normal People pretty much saved a lot of people in the first lockdown. We were obsessed with the on-screen retelling of Marianne and Connell’s love story and our enduring admiration for these well-crafted characters certainly didn’t end when the TV series did.

Of course, nobody who read the award-winning 2018 book was surprised by how good it was. Rooney is one of the freshest and most exciting contemporary names in the literary world, after all. That’s why we were very excited when it was recently announced that her debut novel, Conversations With Friends, is also getting the TV treatment.

And now, we’ve got even more Rooney news. The author’s third novel will be published on 7 September and today, 13 April, publisher’s Faber and Faber have released the cover for the book. Here’s your first look at Beautiful World, Where Are You.

Beautiful World, Where Are You, by Sally Rooney

Rooney’s third novel will be published on 7 September. Faber and Faber shared the news of the new book on Twitter back in January, alongside a photograph of the finished manuscript of Beautiful World, Where Are You.

“Alice, Felix, Eileen and Simon are still young – but life is catching up with them. They desire each other, they delude each other, they get together, they break apart. They have sex, they worry about sex, they worry about their friendships and the world they live in. Are they standing in the last lighted room before the darkness, bearing witness to something? Will they find a way to believe in a beautiful world?”

As reported in The Guardian, Alex Bowler, the publisher at Faber who acquired the novel, called it “a book of friendship and sex, art and faith, power and love. It absorbs you once again in the inner lives of characters with brilliant minds and aching hearts, while marking the next creative leap from a singular writer. The book scintillates with intelligence, empathy and, yes, beauty.”

Faber will publish the novel in hardback, along with two special editions exclusive to Waterstones and independent bookshops.

You can pre-order a copy on the Beautiful World, Where Are You website. Faber will also publish in ebook and audio. In the meantime, this is the perfect excuse to re-watch Normal People over the weekend.