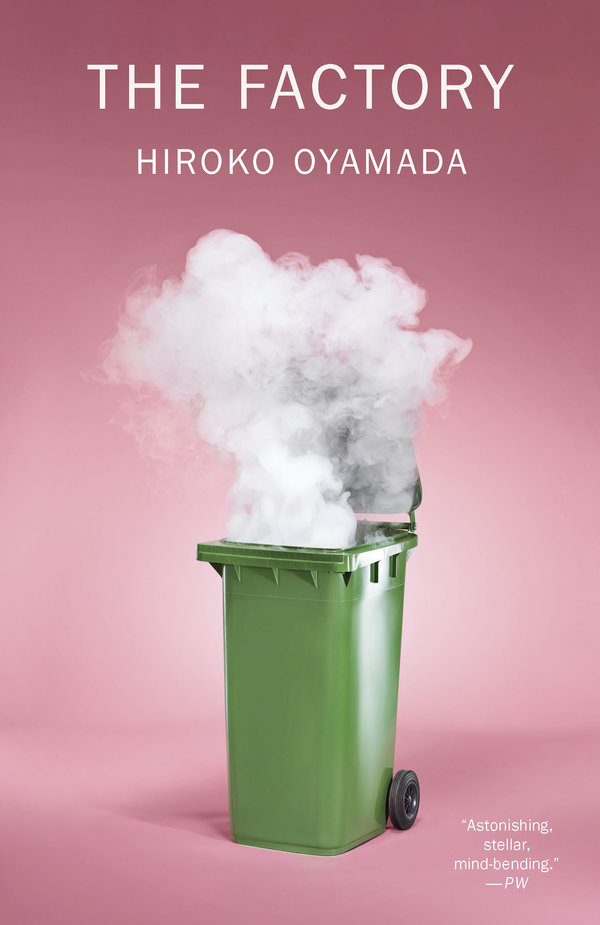 Like Sisyphus, the three characters at the center of Oyamada’s strangely chilling novella push their respective rocks up the hill at “the factory” day in and day out, one shredding the documents that arrive each morning by the container load; another proofreading an endless series of obscure printouts; the third gathering moss in a vain attempt to green-roof the entire complex. But, unlike Sisyphus, these three are also expected to be grateful. After all, “the finest applicants from all across Japan are dying to work at this factory.” “How could I complain?” the proofreader — a systems engineer by training — wonders. “Having work beats not having work. That goes without saying.”

The purpose of the factory is as bewildering as the tasks of the people who spend their lives there. It’s a world of its own, with “mountains and forests, a giant river and the ocean,” and strange creatures that appear to have evolved along with it, like the washer lizard that lives off lint from the factory’s washing machines. There are “apartment complexes, supermarkets, a bowling alley, karaoke,” one of the workers explains. “We have a post office and a bank, a travel agency, a couple of bookstores, an optometrist. … We’ve got our own shrine, with a priest and everything. All we’re missing now is a graveyard.” And yet a graveyard, of sorts, is just what it is. A graveyard for the living.

The human, all too human, neuroses laid bare in Monzó’s pithy stories can be discomfiting to read for the nerves they strike — the lies we tell to get by, the rationalizations and hypocrisies, the forbidden thoughts, the randomness of events. In this Catalan writer’s hands, everything can be turned on its head and nothing is sacred, not even fairy tales. What happens after the prince kisses the toad and is rewarded with the woman of his dreams? He looks at his watch, wonders what to say. “What should they talk about? Should he suggest they go straight to his place or will she take it the wrong way?” What happens after Cinderella moves into the palace and becomes queen — and discovers the king is having an affair? If only the shoe hadn’t fit, if only she hadn’t followed him that night and found, at the foot of a bed somewhere deep in the palace, “her husband’s shoes and two pair of extremely high-heeled women’s shoes, one black, size 40, and the other red, size 41” — just the sizes worn by her stepsisters.

Monzó weaves new adages from the well-worn, like the caution to be careful what you wish for. In the story “Love,” “the soccer player” yearns for his lover, “the archivist” — Monzó employs unusual naming conventions — to stop being so mean, so prickly, and to treat him with “the tenderness she is now afraid to show.” And yet, when she finally does. …

Josip and Andrej are insignificant men in an insignificant coastal town in 1980s Yugoslavia who form an improbable relationship as each other’s blackmailer in this funny, serious, clever novel by a Dutch writer and director. Andrej, a postman who reads other people’s mail, starts extorting Josip over his affair with a woman from Zagreb. Josip, a World War II veteran who runs the town’s historic funicular, follows suit when he finds out about Andrej’s illicit mail habit. Along the way, they become friends, all the while unaware that the other is a Judas.
Each feels he deserves more from life — Josip, more love; Andrej, more recognition — and though their methods may be unsavory, they remain sympathetic if simple characters trying to get by in a complicated world. And it’s about to get a whole lot more complicated, as civil war draws ever closer. Because, even here, in this “wallflower of European history,” known only for its clock museum and pink pelicans, deeply held hatreds lie in wait. “Sometimes it seemed to the townspeople that the sunshine and sparkling blue sea might be camouflaging some approaching misfortune and inevitable death,” Driessen writes. “But most people chose not to think about it. Not think about it, and carry on with one’s everyday activities, seemed the most sensible thing to do.” Everyday activities like delivering letters, operating the funicular, going fishing, cheating on your wife and blackmailing your friend.

A KITCHEN IN THE CORNER OF THE HOUSE
By Ambai
Translated by Lakshmi Holmstrom
363 pp. Archipelago. Paper, $20.

Women and the seemingly infinite variety of restrictions they labor under are the focus of this wide-ranging story collection by the feminist Tamil writer Ambai. While the details are specific to India, particularly the south, the themes are universal — pregnancy, motherhood, domestic labor, politics, playing second fiddle to men, even (as in the title story) inconvenient architecture.

The house in question, built by the man of the family, has “a row of rooms like railway carriages. Right at the end, the kitchen, stuck on in a careless manner,” with a tiny sink that drains onto the feet of whoever works there, causing soles and heels to crack. From one of its two windows, the women inside cooking papadums, stirring the dal or flavoring the meats, might have gazed at the green mountains to the east, might have forgotten their chapped feet — were it not for the location of the clothesline directly outside, and the “trousers, shirts, pajamas, saris and petticoats spread out to obscure the view.” Sometimes, too, the reader’s view is obscured by the unfamiliar language of this alien culture, but, as anyone who has visited a foreign country soon learns, context is a handy guide. The brain need not know what baakri, puranam, channa dal, jaggery and puranpolis are for the mouth to water.