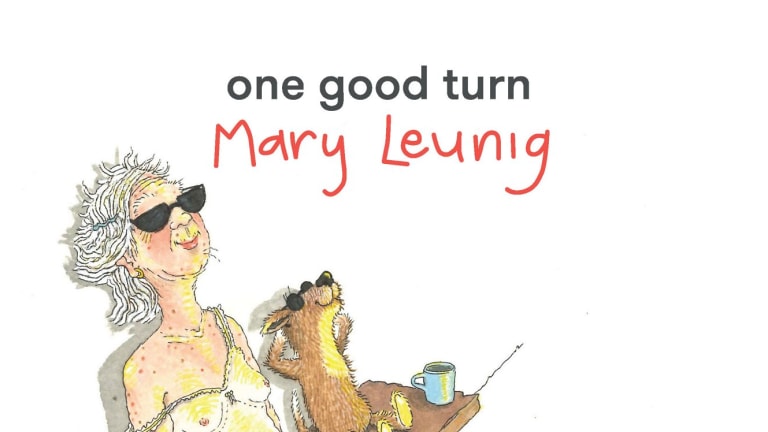 There's an instructive scene midway through One Good Turn, the first book in more than 25 years from artist Mary Leunig. A young, pregnant Mary is standing before a state-appointed caseworker, illustrated as a bureaucratic demon, who is pressuring her to give up her baby for adoption. "I felt qualified enough and old enough to identify conservative bullshit." Leunig writes, "and fight back!"

This spirit of resistance and radicalism animates Leunig's singular book – a graphic memoir that explodes notions of family and capital, attacks bourgeois sensibilities and speaks of the pains and joys of existing as a woman and mother.

Leunig's violent, vibrant drawings alone make One Good Turn essential reading. They meld the abject with the mundane and are always delivered with a tender, savage wit. In one, Leunig lies naked in a pile of urine, while marsupial soccer mums watch on concerned. In another a mother holds the hand of a disembodied child.

Leunig's searing depiction of her estranged relationship with her family has courted the book a degree of controversy. She writes and draws with a frankness and clarity that are shocking at times, but genuinely refreshing.

She literally draws her children as "well-rounded, independent, normal fascists". In another, she shoots her famous brother Michael in the rear, dollar-shaped turds exploding gloriously through the exit wound. With an aching gallows humour, Leunig reifies the pain of living with loved ones who "think of me as a computer that needs rebooting".

I recalled the adoption scene when reading an anonymous review of One Good Turn recently published in The Saturday Paper. It rather patronisingly suggested that the broken relationship between the Leunigs was not fit for public consumption, asking the question "Who is hurt most in the publishing?"

It's precisely the type of conservative thinking that One Good Turn wholeheartedly rejects; that a mother's tolerance should be unconditional; that the vicissitudes of ageing should be demurely endured. Mary Leunig is an artist who won't be managed and it's wonderful that her work is back in the public eye, where it belongs.