They HUFF, they ROAR, they CLANK, they MOVE! Size, strength and speed, embodied! No wonder we are most fascinated by vehicles when we ourselves are at our youngest, smallest and least independent. No wonder, too, that there have been picture books about moving machines for about as long as either has been around. (See “Cousin Chatterbox’s Railway Alphabet” from the 1840s for an early example: “U is the urchin, so simple and small, / who cannot make out how the train goes at all.”) New arrivals in this long tradition drive, float and fly onto shelves each publishing season. A kicking of tires follows for some of the latest. As always, your mileage may vary.

Kate Prendergast sets DOG ON A DIGGER (Candlewick, 32 pp. $16.99; ages 3 to 6) on an industrial lot, drawn without sentimentality; the eye wanders over pavement, warehouses, a concrete canal and a parked excavator with a clamshell bucket — a digger. Nestled within is a small trailer camper, the cozy home of both a dog and that digger’s operator. We follow them in this wordless, paneled story as they begin their day’s work. Young readers won’t fail to notice a small eye on the excavator’s jaw-like bucket, which gives it an apatosaurian air. If the digger doesn’t quite have a will of its own, it does still seem to enjoy its work.

Prendergast works in pencil, in soft shades of gray, and then adds two colors: yellow, for the digger itself and for the safety gear worn by both man and dog, and blue, for the dress worn by a young woman who runs a snack stand on this lot. She has a small dog of her own. There’s something more than hamburgers and hot dogs between the two humans, to judge by how they look into each other’s eyes — but then the woman’s dog goes missing. It’s our title dog who spots the pup clinging to a branch over the canal, and who thinks of using the excavator’s long boom to reach the pup, all communicated through the time-honored techniques of judicious pointing, barking and pawing. The book ends with something like a family portrait in yellow and blue: man, woman, excavator and two dogs, rescuer and rescued.

Well, it’s a curious mix: a gloomy setting, an almost-dinosaur digger, a dash of romance, a touch of peril and a quick-thinking dog. Prendergast’s figures can be a bit wonky, too; at times they squish and stretch to fit their frames. Still, there’s a tenderness to the drawings, and one picks up Prendergast’s affection for her characters and even for that setting, which in its grimness lends an unexpected sort of credibility to the story. Add Prendergast’s convincing sense of how to keep the action moving from one panel to the next, and the young friends with whom I shared this book didn’t stop to wonder if the elements added up; they wanted to know what would happen next, and they turned the pages to find out. 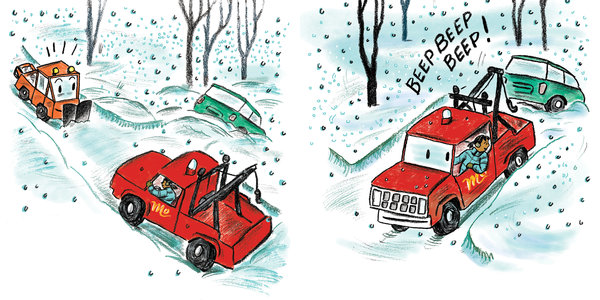 SMALL WALT AND MO THE TOW (Paula Wiseman/Simon & Schuster, 40 pp., $17.99; ages 4 to 8), from Elizabeth Verdick and Marc Rosenthal, is the follow-up to (yes) “Small Walt,” in which snowplow Walt, with driver Gus, earns a spot alongside the big plows, despite doubts about Walt’s size. In this outing, Walt and Gus, making their rounds, see a car skid into a snow-filled ditch. Can they help? Despite his can-do spirit, Walt must now learn to deal with his limitations: “My plow is tough, / but it’s not enough.” The, from over the horizon, appears Mo the Tow, driven by “the lady in blue — Sue.” (Are women in blue a trend?) Mo and Sue are the pair with the hardware and skills to perform this rescue — except it turns out they can’t quite reach the stranded car; first they’ll need some snow cleared. Are Walt and Gus up to it? No spoliers. Suffice to say all these characters have something useful they like to do and that they do well, and each has limits, too, making this a story about teamwork as well as pluck. Verdick and Rosenthal may not be clearing new ground with these lessons, but what they plow, they plow well. The characters are appealing, and the language is active and satisfying, with plenty of onomatopoeia. Good luck saying RUGGAROOOM BRUMMAHUM 10 times fast, but your audience will enjoy hearing you try.

The flap copy tells us that “Small Walt” has been called “reminiscent of Virginia Burton’s classics,” and this book will be, too; the cover design practically dares you not to think of “Mike Mulligan and His Steam Shovel.” Rosenthal’s drawings feel like a contemporary take on Burton’s spirit, though, rather than something derivative: Burton, after an espresso. The lines and colors are direct, cheerful and effective. They look like the work of someone in a good mood, and it put me in a good mood to look at them.

J. M. Brum and Jan Bajtlik’s OUR CAR (Neal Porter/Roaring Brook, 32 pp., $16.99; ages 2 to 6) introduces a father, a son and the little red car they love. The drawings are digital, done in bold colors and simple shapes. (I might have guessed pastel, had one image not been recolored and reused multiple times on the title page and opening spread.) Father, the driver, and son, the passenger, are presences more than characters, just enough there to help us project ourselves into the book. “Our Car” has little interest in the actual mechanics of automobiles, yet it cuts, joyfully, straight to the things that thrill about cars; the book is a distilled dose of speed and color. The troubles that come with cars are here, too. When its engine needs work, this car “screeches like a wild animal,” and teeth, eyes and even plodding feet appear, mysterious and terrific.

While their car is in the shop, father and son must resort to the bus. No apologies for public transportation are made! Straphangers scowl, armpits loom too close to heads, and what is that fellow in the back doing with his finger so close to his nose? Why are things we hope to avoid on a bus such fun to see in drawings of one?

When the car is home again, father and son wash it with the affection you elsewhere see lavished on golden retrievers. Then the book takes a leap: “Today I get to drive.” Dad is no longer at the wheel — the boy is! And off he zooms! Alas, on the next page we see he was not really driving, but only on the living room furniture, pretending. Mom (heretofore unmentioned, and still unseen) is given the thankless role of asking him not to park on the rug.

I’ve yet to be made happy by reaching the end of a story and finding one of these “it was all a dream” endings waiting. We decide to enter a sort of dream already when we enter the world of a book; it is not necessary to wake up twice at the end. Buy this book, and paste down that last page. Let the kid drive!

Brian Floca is the author and illustrator of many books for children, including “Locomotive,” which won a Caldecott Medal.