If the Collected Works bookshop were a poem it would be an epic, one that spanned if not centuries then at least decades. Not a grand, historical work, more a gentle, contemplative one. But, of course, it's not, and soon the shop with poetry at its beating heart will reach its final stanza.

After almost 35 years in a variety of homes in Collingwood, Fitzroy, the city and in its current location in Swanston Street's imposing Nicholas Building, Kris Hemensley's​ unique shop will stop trading at the end of next month. 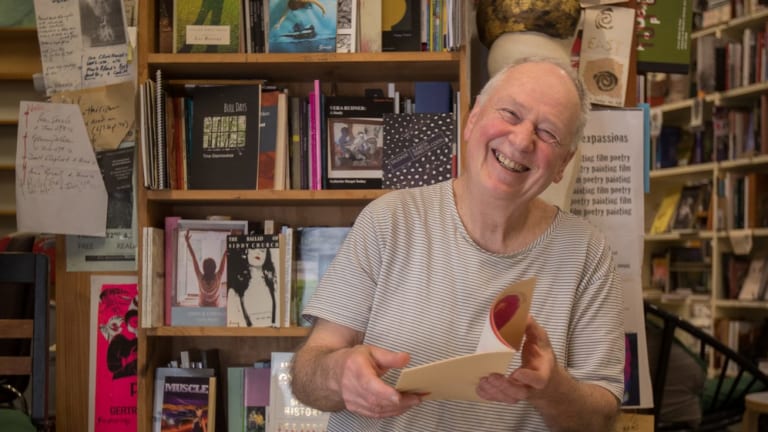 Some of the books he will store; some he may sell. But, he says, the shop has never been about transaction – it's always been a meeting place. That's why he wants to maintain the mythos of Collected Works.

"It seemed to me that people should have an idea of a city which has in it certain places – bookshops, music shops, cafes – and even if people never come it's absolutely correct, appropriate that their view of the city included this," he says.

The decision to close came with the impending expiry of the lease. "The pincers of the internet and real estate affect all small business, even though we don't have a business imperative. We still have to pay the rent, replenish the stock." He says he and his partner, Retta, had subsidised the shop for years. "I'm a sort of bum, a dharma bum."

Collected Works has always been a place for readers, but also for poets. There have been countless launches and readings; its walls display posters, pictures and poems like historical documents.

Lisa Gorton, award-winning poet and novelist, said it was a repository of the social life of Australian poetry that you don't get in histories. "All kinds of poets go there. I don't think you would find a poet that doesn't love that bookshop."

And Chris Wallace-Crabbe, whose latest collection, Rondo, will be one of the final launches at the shop, said Hemensley was a great, genial character. "It's a bit like a club, the way one gathers around the stacks of books and shelves for readings and launches. One of the reasons people want to go to the shop is because they feel it barracks for our team."

Hemensley, who has been a teacher, editor and is a much-admired poet – his most recent collection, Your Scratch Entourage, was published in 2016 – reckons every poet in Australia has been to the shop and plenty from overseas, including Seamus Heaney the year before he won the Nobel Prize. "That was the ambition, not to be the prisoner of any particular tendency or school. And that meant personalities as well as the poetry that was on the shelves. Everybody was welcome."

Collected Works, a poem by the late judge and poet Peter Gebhardt​ displayed on the wall, begins: "If all those books shed tears / As well they might / The Nicholas would be awash, the subways soaked / And the cranking lifts left lurching …"

It won't be only the books shedding tears when Collected Works reaches the end.