A very frisky flutterer: The Purple Emperor spends his life boozing, fighting and fornicating for hours … well, wouldn’t you if you lived for just ten days?

Spending several decades of one’s life pursuing a single species of butterfly is just the kind of monomaniac eccentricity at which the British have always excelled.

The author of this book, Matthew Oates, has done just that for more than 50 years.

In fact, you feel his enthusiasm has only increased the more he has learned about the object of his pursuit, so that he’s now one of the great experts on the subject.

Admittedly, the butterfly in question is the spectacular Purple Emperor, the most stunning of all British species, also known to Victorian enthusiasts as His Imperial Majesty or the Emperor of Morocco. 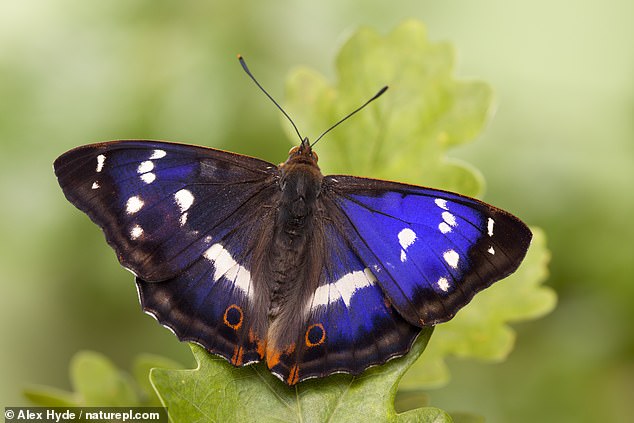 Until only a few decades ago, the author might have found a comfortable home in the Church of England, with a small country parish where he could preach one sermon a week, and then spend the rest of his time happily lepidopterising.

The book offers several such examples: the Reverend William Bree, who once managed to catch a Purple Emperor under his tall hat.

Or The Rev W.G. Wilkinson of Hampshire who, in 1857, in The Entomologist’s Weekly Intelligencer, wrote a thrilling account of how a glimpse of a Purple Emperor ‘inflamed my desire’, and how the creature swooped at him violently, ‘taking the breath out of my body. He flew bang at me’.

After a titanic struggle, the parson finally caught it in his net for his collection, at which ‘I felt a pang of sorrow that I hadn’t caught two’.

Beautiful though he is, the Purple Emperor, alas, has what another Victorian called ‘depraved appetites’. Instead of feeding on nectar from flowers, it devours the honeydew of aphids high up in the canopy. Then, when it fancies something saltier, it flies down to feed on things like fox poo, or can be lured with bait such as semi-rotten oriental fish paste.

This is why yet another parson, the Rev Hewett, writing in 1895, was troubled as to how to travel the country carrying a 30ft net and some extremely whiffy meat of the kind which might attract an Emperor. For ‘it makes one so very unpopular in a railway carriage’. Today, there are still enthusiasts — they all seem to be men, for some reason — spreading rotten food around our countryside to attract an Emperor. 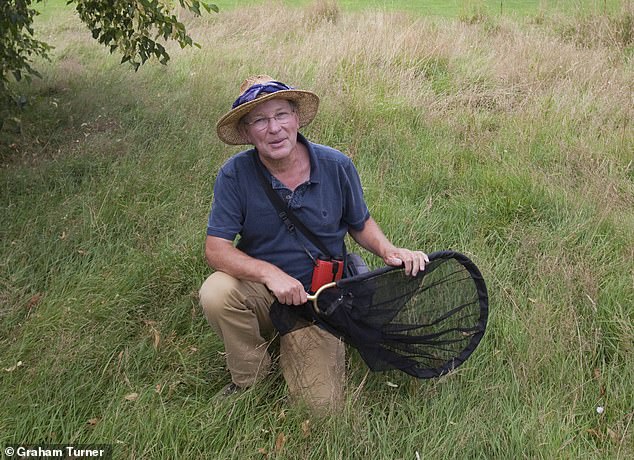 Matthew (pictured) who has spent more than 50 years examining the species, reveals oak trees and sallows are important to their lifecycle

Another colleague deliberately wears the same filthy, sweat-soaked trousers all summer long in order to encourage a butterfly to land on him and feed on his, er, ‘body salts’ — a thrilling event he calls a ‘trousering’. There is a full-colour photo of one such trousering in the book to prove it.

It’s a wonderfully funny and eccentric book, full of rich human oddity, but Matthew Oates has also become a serious expert in his field.

For most nature lovers, the Purple Emperor is vaguely known to spend most of its life high in the canopy of mature oak trees, magnificent but rarely seen.

Oates reveals that equally important trees to its lifecycle are the sallows, especially goat willow, fondly known as pussy willow, in which the female prefers to lay her eggs. She lays one on each chosen leaf, selected to be in semi-shade.

The male, meanwhile, spends most of his ten precious days as an Emperor up there in a gap in the oak canopy, fiercely defending his mating territory against all comers. Oates records him attacking and driving off even large birds such as ravens and red kites, which sounds hard to believe — but nature is full of surprises. 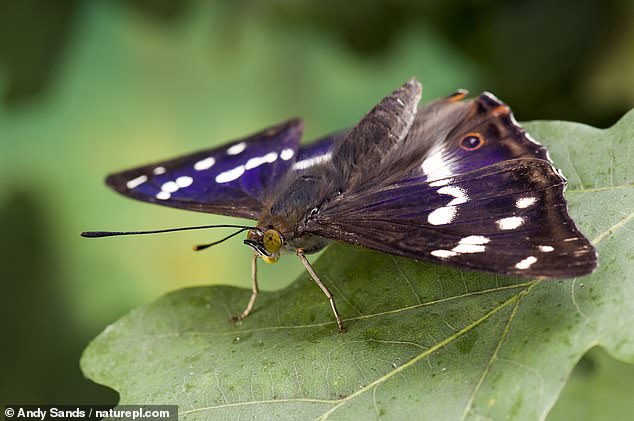 The Purple Emperor may also be especially aggressive because as well as eating oriental shrimp paste he likes to drink fermented oak sap, and is therefore mostly inebriated. Thus, he lives out his ten days or so of drunken purple glory eating rotten food, boozing, fighting and fornicating. A splendid sight, but not at all a good role model.

Why has the Purple Emperor seen such a decline in recent years? The blunt answer is, for the same reason everything else in nature is in such crisis: too many people.

But more specifically because of a foolish and short-sighted view of those crucial willows and sallows as ‘scrub plants’ or even ‘invasive species’ to be tidied up and got rid of, even though they are our quintessentially native trees, loving our damp climate and supporting a huge variety of wildlife. 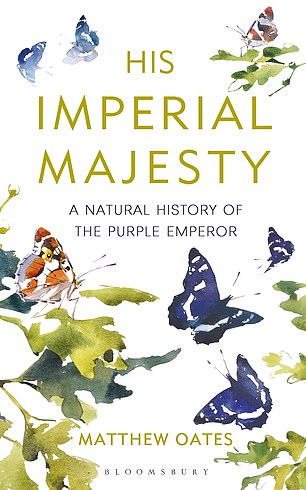 It now seems willows are second only to oaks as an insect habitat. The Forestry Commission has been a major villain here. As recently as 2010, it was still grubbing out sallows from woodlands that were actually Purple Emperor strongholds. Unbelievable.

Happily, attitudes are at last changing, Purple Emperor numbers are recovering and this year’s prolonged warm, dry spring means that it may well be a record year for this most exotic of our flying insects.

Thanks to genial obsessives such as Oates and his dotty, wonderful pursuit, we are learning more about His and Her Majesty every day. They mate for an average of three hours and 32 minutes a time, for instance, which is almost as long as Mr and Mrs Sting with their Tantric sex.

Even more amazing, their actual colour is ‘beyond purple,’ an ultra-violet beyond our own visual spectrum, but which they can see perfectly: a brilliant fluttering splash among the green summer oak leaves, a shade for which we don’t even have a name.

The book provides an invaluable appendix detailing whereabouts in the UK you might expect to spot one: Alice Holt in Hampshire is a favourite site, and there’s another hotspot north-east of Oxford, around Bicester. To lure one down, don’t forget to take some fish paste well past its sell-by date.