The history of Rome is peppered with boastful men. Undoubtedly, some were geniuses — but many more were monsters, whose often gruesome antics ripple through Ferdinand Addis’s kaleidoscopic retelling of the city’s story over 3,000 years.

It is heroic, bloody, at intervals tragic and frequently compelling: with a weakness for its own self-invented mythology, Rome emerges as a backdrop for both human greatness and abject, toe-curling, spine-chilling littleness.

Addis’s lengthy (perhaps over-lengthy) survey is structured around 22 especially colourful episodes from Roman annals but, wisely, he resists an attempt to fix any single definition upon Rome.

Instead, he lets others do that for him. At the end of the tenth century, Otto III called Rome ‘caput mundi’ — ‘the head of the world’. 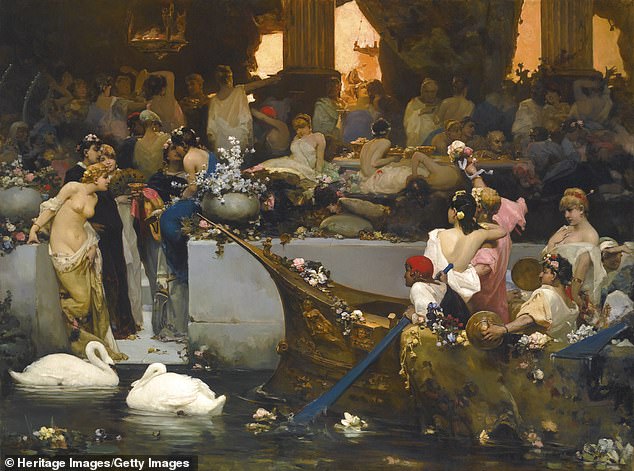 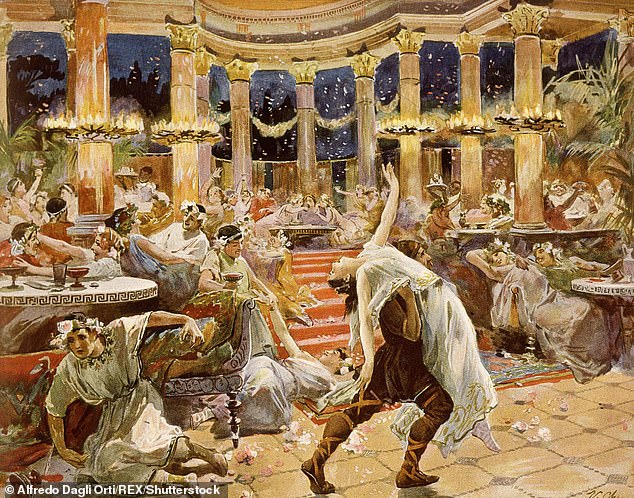 The reader is quickly desensitised to eye-watering brutality and goriness. Pictured: Festival of Nero, the Rape of Lygia by Ulpiano Y Sanz Checa

An 18th-century art historian claimed it was ‘the school for the whole world’. 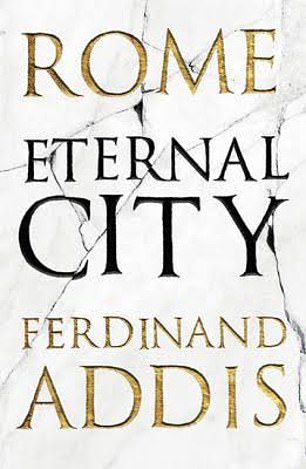 Through all Rome’s reinventions and reincarnations pulses the brazen, sometimes destructive, vitality that has enthralled visitors, pilgrims and artists since antiquity.

This is a confident, elegant account of the city’s progress from a semi-rural early republic, through the high-jinks of the Caesars, the empire’s bloody decline, Rome’s destruction by Goths, the decidedly dark Dark Ages and medieval interludes of ‘rebellious barons and malarial mosquitoes’.

Addis spotlights the fruity corruption of a sequence of popes, complete with mistresses, illegitimate children and, in the case of one archbishop, a ‘travelling privy covered in gold and scarlet brocade’.

We see Rome as a visitor spectacle for the Grand Tourists of Georgian England, all broken monuments and picturesque sunsets.

Later, like Rome’s emperors, the Fascist dictator Benito Mussolini — priapic and bullying — attempts to rebuild interwar Rome in his own image. In the Fifties, Fellini, by contrast, transformed the seedy hedonism of Rome into an archetype of glamour. 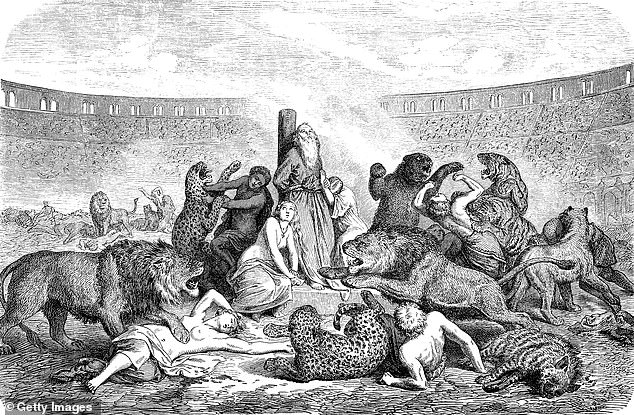 Other stories include that of the citizens of the small town of Megara, who freed from their cages a number of lions destined for the gladiatorial arena, only to be eaten by the liberated beasts

The result is a book that leaves its readers punch-drunk, exhilarated and queasy.

We quickly become desensitised to eye-watering brutality and goriness: there’s the Empress Fausta, wife of Constantine, who may have been boiled alive by her husband for perceived acts of treachery; the citizens of the small town of Megara, who freed from their cages a number of lions destined for the gladiatorial arena, only to be eaten by the liberated beasts; and the 3rd-century Elagabalus, a rent-boy of an emperor, who amuses himself in a temple in which a snake, a monkey and a lion are imprisoned, ‘fattened on human genitals’. The grandeur of Rome’s imperial past has made it a magnet for tyrants and egotists, which has seldom proved a recipe for stable government.

The miracle is that Rome has survived in the face of repeated mismanagement, rulers’ selfishness and stupidity and bloody battles fought on its streets, in its palaces, temples and churches.

The result, Addis suggests, darkly, is ‘a stubborn chaos of humanity and decay’.

Undoubtedly, other authors will write other histories of Rome.

Not all of Ferdinand Addis’s account will appeal to every reader — but his version is admirably ambitious and succeeds splendidly in a task that would daunt lesser authors.