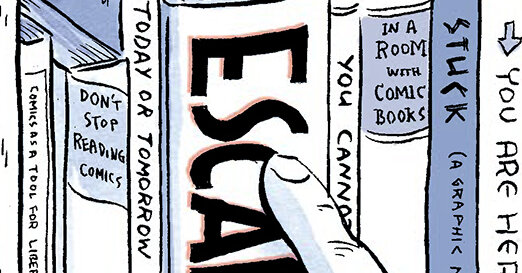 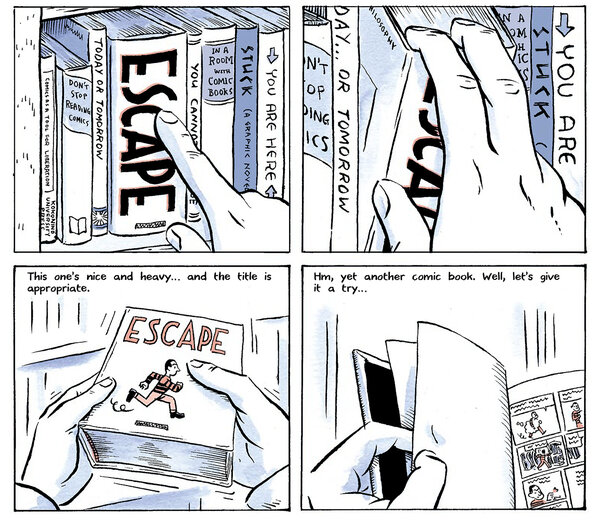 Matt Madden is the stuntman-philosopher of American comics. His best-known book, “99 Ways to Tell a Story,” riffed on Raymond Queneau’s “Exercises in Style.” That bible of experimental writing from 1947 retold a mundane scenario — a mild contretemps on a Paris bus — with precision (“In a bus of the S line, 10 meters long, 3 wide, 6 high …”), in Cockney (“A sees vis young Froggy bloke, caw bloimey …”) and so on. Transposing the conceit to the graphic medium, Madden devised his own non-anecdote: Man leaves desk, opens fridge, tells someone the time, then can’t recall why he stood up in the first place. This ball of nothing gets reworked as (among other things) a batch of daily comic strips, a piece of the Bayeux Tapestry and a do-it-yourself kit in which each element (from wristwatch to lettering) is separated as if in a box, ready for assembly. The hilarity mounts, but so does the mystery of what makes a story. In flaunting style over substance, he shows them to be one and the same.

Madden’s BRIDGE (Kuš!, 24 pp., $7) grew out of a different stunt, a temporal constraint. In one day, Madden created a 24-page comic — a page for every hour — with each page representing a decade. (He did this in 2007, and retooled the story nine years later.) The result is a concise yet sweeping epic, in which a fleeting boyhood memory (crone, mystical bridge) kicks off a brisk multigenerational quest. In “Bridge,” the constraint (time) has merged invisibly with its subject (time). This ouroboric tale is dazzling, sure, but more moving than it has a right to be — the most potent 24 pages you’ll read all year.

By contrast, EX LIBRIS (Uncivilized, 105 pp., $29.95) is a work of purposeful sprawl. It’s an existential locked-room mystery — “Memento” with a bibliophilic twist — in which a dazed, nameless narrator tries to overcome his enigmatically dire impasse by looking for clues in the bookcase by the door. It’s a perfect vehicle for Madden’s talents and obsessions, allowing him to evoke an invisible library full of nonexistent titles — not just graphic novels (“Obedience: The First Memoir in Woodcuts”) but academic studies of the form (“Ph.D. Phunnies”) and obscure anthologies (“El Cómic Azteca”). He lets loose with a range of graphic approaches, from a “Dark Knight”-like superhero spread (a masked crusader named Bookworm battles the caped fiend Papercutter) to a rumpled relationship story à la Jeffrey Brown (the doomed couple is drawn as Shaggy and Velma, for good measure).

Insider wit abounds. After finishing a few pages of manga, the narrator muses, “Funny, I wonder if it’s a bad translation, because even though it’s in English I feel like I’m missing something” — not realizing the pages should be read backward, in the Japanese manner. A panel in the E.C.-style “Library of Terror” winks at Goya’s gnarly “Saturn Eating His Children.” “Ex Libris” channels the spirit of the arch-interrupters Italo Calvino and David Mitchell, as well as Xavier de Maistre’s “Voyage Around My Room” and Harry Mathews’s “Tlooth.” Just when I thought I might have had my fill of the virtuoso books-within-bookishness, Madden sprang a surprising, satisfying solution. The only thing that would have pleased me more: seeing the entirety of “Bridge,” wedged among the hundred other lonely, ghostly comics.

R. Kikuo Johnson isn’t a style juggler, though his latest graphic novel, the note-perfect NO ONE ELSE (Fantagraphics, 101 pp., paper, $16.99) bears scant resemblance to his moody 2005 debut, the newly reissued NIGHT FISHER (Fantagraphics, 137 pp., paper, $19.99). “Night Fisher” begins with seven atlas-ready maps charting the formation of Maui since the Pleistocene, its shape in flux because of lava flow and erosion. These turn out to be illustrations in a textbook being studied under flashlight by Loren, a senior at a tony prep school on the island. With eyes perpetually obscured by glasses, Loren is at odds with his best friend, his would-be girlfriend and his single dad. He starts hanging with a meth crowd and slips into a haze of inarticulate remorse. Speech bubbles sometimes overlap, and the harsh black and white intensifies the angst. (Hawaii has rarely looked so ugly.) Johnson notes in the afterword to this new edition of the book that he “retouched nearly every page.” I’m usually averse to such tinkering, but the book hits harder now. It’s a coming-of-age story with teeth.

“No One Else” shares the Maui setting of “Night Fisher,” but on the surface it’s a brighter affair. Johnson works in a slate claire ligne (the controlled composition favored by Hergé), punctuated with a few warm patches of peach and scattered elements — a deadly blanket, a dream of fire — in startling orange. A single mom, Charlene, leaves her nursing job to have a go at applying to medical school. Money is tight and the house is a mess, though her young son, Brandon, tries to clean up when he’s not watching TV. Her aged father — mute, shuffling — lives with them. No one’s inclined to talk much. A tragic fall sets the story in motion. Brandon’s cat runs away. The arrival of Charlene’s chatty, happy-go-lucky brother, Robbie, who left Hawaii to live the life of a vagabond musician, stirs the pot. She tunes him out, resentful of his absence while she was helping their father.

For readers expecting a magnum opus from Johnson after all these years, the brevity of “No One Else” is initially dismaying. But the length works in its favor. I’ve read it four times, and find fresh connections and details with each round. Some are humorous (Robbie’s T-shirt, which surrounds the Black Flag logo with “Bach Fugue”), others more fraught with the vestiges of empire: A single page shows protesters outside a sugar mill, one holding up a sign saying “100 Years Is Enough.” (It was only on a third read that I noticed, tucked behind the back cover flap, a short history of the Pu’unene Mill, which closed in 2016.) This fraught family drama ends with a cathartic yowl, while avoiding the claustrophobia of its predecessor. You can take a breath amid the Sturm und Drang. As Robbie shouts to a tourist honking at a stoplight: “Relax, brah! This ain’t the mainland!”