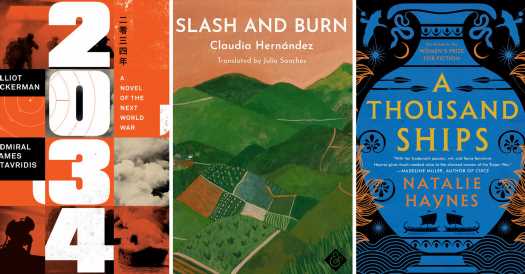 This fast-paced military thriller details the horrifying aftermath of a mistaken encounter between an American naval patrol and a potent Chinese weapon. The weapon’s power — to destroy all computers on board the American ships, rendering them utterly isolated — works as a kind of metonymy for the book’s argument about America’s waning global influence. The military’s isolation finds a twin in the novel’s political problem, in which American operators must reimagine their allies not as helpers to boost their might but as saviors.

For all their attempt to thread “2034” with diverse characters, the authors — Ackerman, a novelist and former Marine, and Stavridis, a former NATO commander — emphasize the organizers of war, not the cogs in the machine. Their major nod to enlisted men and women comes in the form of a pedigreed fighter pilot, Maj. Chris “Wedge” Mitchell, who feels torn from an earlier era, if not a different book. “2034” is a swan song for American exceptionalism, and the war it imagines coming in a few short years symbolizes the final failure of the American empire’s hopeful experiment. There are a few pointed references to the coronavirus outbreak, and the “one-term” Pence presidency, but after this winter’s political upheaval, we know that the greatest threats to American life currently live within our borders, and that our immediate challenge is coming to terms not only with our past but with our present.

One of the more intriguing characters is Sandeep Chowdhury, a National Security apparatchik whose interior monologues reflect his anxiety about a government that fails to see how its image of itself belies reality. But “2034” imagines that America’s star has fallen because its enemies have lapped it technologically; it is a weakened world power because of its complacency, not because of internal division and civil strife. “As he walked, he struggled to put words around his reservations as if he were writing a white paper to himself,” the authors write of Chowdhury in a passage that makes for ironic reading in light of current events. “His opening sentence came to him. It would be, The America that we believe ourselves to be is no longer the America that we are.”

SLASH AND BURN
By Claudia Hernández
Translated by Julia Sanches
307 pp. And Other Stories. Paper, $17.95.

Narrowly focused on the women in a single family, Hernández traces the reverberations of El Salvador’s civil war on a young girl as she becomes a guerrilla and, eventually, an ex-combatant; and, finally, on her daughters — four of whom she raises herself and one who is adopted by a French family during the chaotic years of the war. The characters lack names, and their familial relationships make it hard, at first, to keep them straight as Hernández moves around in the novel’s time frame. But the effect, of showcasing war’s minute, daily power to alter life’s courses, is forceful.

The details of “Slash and Burn” are arranged gently, gathered in a loose assemblage of generational vignettes: the combatant’s first flush of love with the father of her first daughter, and that love’s dissipation as she returns to the guerrilla camp to find him involved with someone else; one of the combatant’s daughters, choosing a pink and purple camouflage backpack, to the consternation of her ex-combatant mother, for her courses at the university in San Salvador; digging up a wedding ring buried in a former home that soldiers burned.

The novel’s quiet, domestic focus serves Hernández’s purpose well. The intimacy of the narration is devastating in its precision, allowing us to trace the ramifications of war through generations of family life. Hernández’s choice to keep personal names from her reader is a powerful tactic, especially when we move among the families of characters touched by war. You turn back a page, two pages, asking yourself, Which daughter, which mother, which sister? The answer is all of them.

Haynes’s feminist novelization of the myths and histories around the “Odyssey” is savvy and well plotted. But her conceit — that the Trojan War’s women are underexamined heroines — is mildly perplexing. Expanding on stories referred to in passing in Homer’s epic, Virgil’s “Aeneid” and other ancient sources, including the Trojan Creusa’s blind reel through her city’s burning streets and the threat of godly rape that inaugurates Cassandra’s dreaded prophecies, Haynes’s novel shares bones with classic accounts of the women of Greek mythology and drama. We know the myths of Iphigenia and Andromache, so the plots Haynes imagines for them feel familiar, if the specifics seem more terrible. Unsurprisingly, much of the horror focuses on women’s sexual abuse and the deaths of their children; war’s effects on noncombatants tend toward a living perdition.

The novel is broken into short vignettes about particular figures; a story line following the Trojan women waiting to be divvied up by the Greeks after the fall of Troy; and arch commentary by Calliope, a poetic muse, and Penelope, Odysseus’ long-suffering wife, who serve as a chorus and offer the book’s most explicit political arguments. In long letters to Odysseus, Penelope worries over the mistakes Homer makes about her husband’s return voyage, passive-aggressively hinting that the poem makes him sound distracted and selfish.

Calliope’s complaints are more explicit: “This is the women’s war, just as much as it is the men’s,” she rails, frustrated at Homer’s failure to narrate the Greek and Trojan women’s woes. Haynes is most effective when she hews closely to her characters’ immediate experiences: Aphrodite’s skin smelling “faintly of salt,” the sticky sweat soaking through the conspirator Polymestor’s robe as he tries to deceive Priam’s widow, Hecabe. Haynes’s inventiveness in conjuring the lives of Greek and Trojan women through these evocative details keeps the novel humming toward its bathetically optimistic conclusion: tragic as it must be, hopeful as we want it to be.