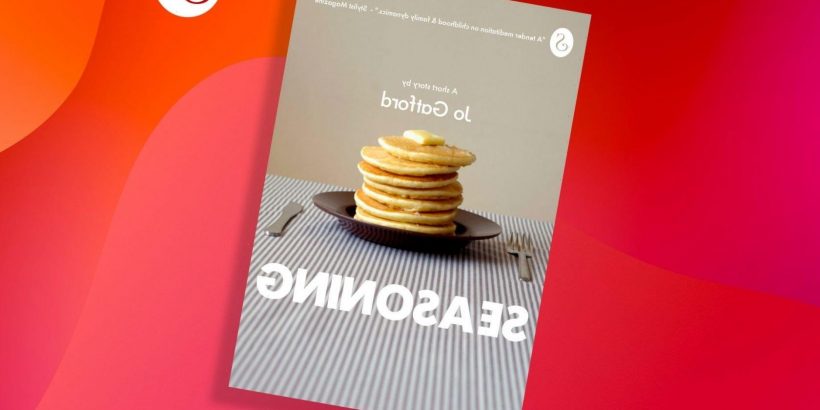 This week’s Stylist Short Story is Seasoning by Jo Gatford; it explores childhood, family dynamics and the comfort of food, set around the sometimes fraught, sometimes joyful environment of a dinner table.

At the table, there are rules. No open-mouth chewing but elbows are fine. You don’t have to make conversation but you eat what you’re given. And there is always a fourth place, set with silverware that never needs washing.

We know it’s spring when she bleaches the curtains and sometimes there are pancakes because she says you don’t have to wait for a random Tuesday in April to make them.

The extra plate gets lemon wedges and sugar, just like hers. We drown ours in syrup, roll them up around sliced banana and eat them like tubes, hot enough to strip taste buds but too good to care.

My brother thinks he’s funny, says, “Kids are like pancakes — you always fuck the first one up,” when she curses at the frying pan. Swearing is allowed too, so long as it’s witty or cathartic, but this earns him a look that scalds.

We know it’s summer when she goes to war with the ants in the kitchen—bicarb and tea tree, a flick of the dishcloth and a punch of breath every time she takes a tiny life. When it’s hot there is no cooking, only scavenging. We take turns making up the worst sandwiches we can think of; mix spices into milk and dare each other to down it; get drunk on water, enough to thin the blood, laughing until we fall off the back step and she starts to yell but can’t figure out exactly for what—just watches out the door behind us as if she sees someone else there.

The extra plate sits on the windowsill and the leftovers are carried away by ants in the night.

My brother tells his classmates we have a ghost, charges them a quid to sit alone in the attic while he crawls through the eaves, scratching at the walls. There’s so much screaming she comes up to see; gives my brother such a whack he doesn’t speak to her until dinner.

He sleeps in my bed that night and I ask if he thinks it’s really a ghost at the table. He says it’d be better than a grown woman having an imaginary friend. I dream of a body trapped in plaster, its face pressing out through wallpaper, mouth stretched wide, and although it cannot speak I can feel its hunger scrabbling beneath my skin.

We know it’s autumn when her hands turn purple peeling beets over the sink. A tray of roast potatoes makes everything better. We eat right out of the pan. Less washing up, she says. The early dark makes her tired so we cluster up in the galley and take turns burning our fingers, burning the insides of our cheeks, and leave an unspoken pile in the corner of the tray for the extra plate.

When we were little she stood us side by side on a stool, made a cage with her arms to keep us from falling and showed us how to crack eggs—tap-tap, thumbs together, open it like a book—but the kitchen is barely big enough for two now, let alone three, or four, even if one of us doesn’t take up any space at all.

My brother likes to push at the edges of things. He plays at guessing the name of our invisible guest. When she ignores him he starts piling his unwanted vegetables onto the fourth plate. Harold loves his peas, doesn’t he? Judith needs to eat up her swede. Would Mr Montague like some cabbage? She looks past him, saws at her meat until the ceramic beneath it screams. It’s only when he tries taking from the extra portion that she stops chewing and snatches his fork out of his hand—throws it clear across the room. When the ting-ting echoes fade she carries on eating without a word and he stares at the empty chair and sometimes I think everyone else can see things I can’t.

We know it’s winter when there are split peas soaking in a pan overnight. We know it’s nearly payday when there’s pasta for days—butter and salt and pepper and spaghetti one strand at a time. She makes her own laundry powder with borax and grated soap and says it works just as well as the boxed kind so we don’t mention how everything comes out smelling like the mould on the rubber seal of the washing machine. Someone gives us a slow cooker and for a while there’s soup and stew that somehow always tastes the same.

The extra plate becomes a bowl and the evenings get so cold and gas so expensive we take our supper to bed, try to keep warm on our own blanket islands, the walls between us weeping with condensation by morning.

My brother gets tall and angry and sometimes it feels as though he could pick a fight with her over a grain of salt. He walks out the day before his birthday and although she doesn’t bake on principle—doesn’t have the patience for such chemistry—she spends hours swearing over a triple layer cake, writes his name in icing and lets the candles burn right down to their plastic holders waiting for the sound of the key in the lock.

The extra plate sits empty, all our plates sit empty, until he lets himself in the back long after midnight and wakes us with clattering crockery. We come down to four pieces of cake laid out like points on a compass and we eat in silence and darkness. She reaches for him across the uneaten slice, holds onto his shoulder, fingers gripping in Morse code—something I can’t translate. They stay like that a while, lips curling in the exact same way, even though the rules say there’s no crying at the table, before he slips out of his chair, lets her hand drop between them, and clears away three empty places.

Stylist publishes a new and exciting short story each week and is open to submissions. If you would like to submit, please send a story (fiction) of no more than 1,000 words and any genre to [email protected] Successful submissions receive payment of £200, more information is here.