Both grew up in the Midwest, both wrote novels that skewered the patriarchal, conformist towns where they were raised, and both shared the distinction of having churchmen condemn their books as “immoral.” They should have been friends, but by 1925, when Theodore Dreiser’s “An American Tragedy” was published, he and Sinclair Lewis were hoping to become the first American to win the Nobel Prize in Literature. Lewis had already produced “Main Street” in 1920, then followed it with “Babbitt,” “Arrowsmith,” “Elmer Gantry” and “Dodsworth” before the decade was even over. In 1930 the prize was his.

A year later, Lewis and his second wife, the journalist Dorothy Thompson, attended a banquet at New York’s Metropolitan Club and spied Dreiser there. Thompson and Dreiser had their own fraught history. They had recently taken a tour of Russia as guests of the Soviet government. When she returned to the States, Thompson wrote a series of articles about her trip in The New York Evening Post. These became part of her book “The New Russia.” When Dreiser’s book about the trip, “Dreiser Looks at Russia,” was published a month after hers, she was shocked to discover that he had lifted 3,000 words from her articles. When her lawyer confronted Dreiser, the novelist made the astounding suggestion that Thompson must have stolen his notes when she visited him in his hotel room in Berlin.

At the banquet Dorothy and Sinclair avoided Theodore, but when America’s new Nobel laureate was asked to say a few words, Lewis stood up and announced, “I feel disinclined to say anything in the presence of the son of a bitch who stole 3,000 words from my wife’s book.” After dinner Dreiser confronted the inebriated Lewis and dared him to repeat his accusation. When Lewis obliged, Dreiser slapped his face. While a bystander held Lewis’s limp arms, Dreiser again challenged him to repeat his charge. Lewis did, and was slapped again. At that point Dreiser was asked to leave, and he did so as fast as he could.

Lewis had always championed Dreiser’s genius, and he continued to even after the slapping incident. In 1944 Lewis succeeded in getting the American Academy of Arts and Letters to give Dreiser a special award for distinguished achievement. But it was hardly a substitute for a Nobel. 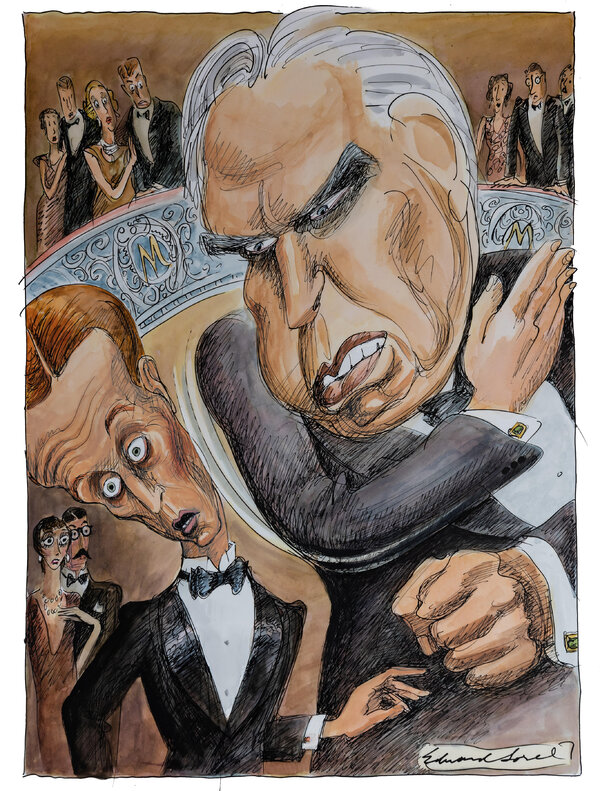 Edward Sorel, a caricaturist and muralist, is the author and illustrator of “Mary Astor’s Purple Diary.” His next book, “Profusely Illustrated,” will be published in the fall of 2021.