When I was 11, my beloved sixth-grade teacher, Sara McBee — who still sported a 1960s bouffant and frosted lipstick — read aloud to the class every day after lunch. At first, I wasn’t sure about being read to. It seemed childish, a throwback to first and second grades. But Mrs. McBee was a terrific reader, voicing all the characters with verve, and she picked novels I’d never heard of in small-town Texas: Chaim Potok’s “The Chosen,” Harper Lee’s “To Kill a Mockingbird.”

One day she began Agatha Christie’s “Cat Among the Pigeons,” a murder mystery set at an English girls’ boarding school. I was entranced by the seemingly incongruous details: a fortune in smuggled gems, an unwieldy tennis racket and a coup in the Middle East. Not long after Mrs. McBee began the book, I badgered my mother to drive me to the Emily Fowler Public Library, where I checked out “Cat Among the Pigeons” along with a battered stack of other Christie books. That is how my obsession began. 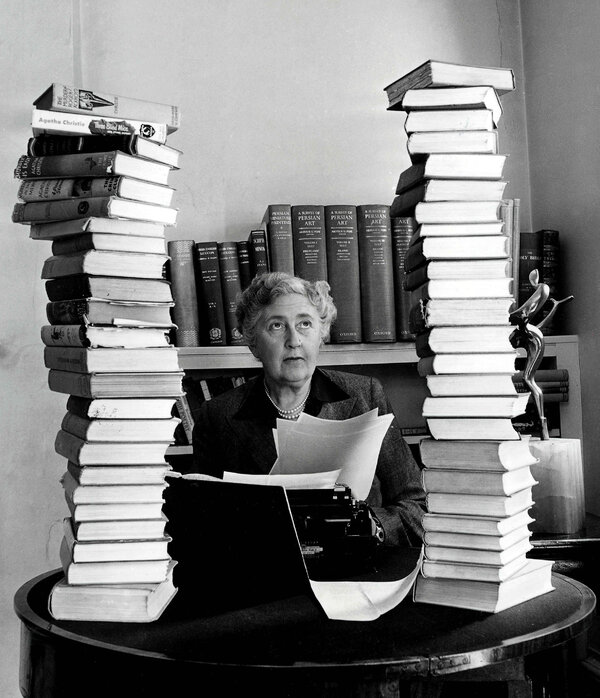 All these years later, I’m still a Christie fan. They’re comfort books; I’ve read them all. Yes, they can be dated and fusty. But there’s something soothing about the familiar formula. You know there will be at least one murder and quite possibly more. The odds are good that the murder will occur in a bucolic village, someone’s country house or on a vacation. And the case will be probably cracked by one of Christie’s main detectives, either the portly, mustache-twirling Belgian, Hercule Poirot, or the spinster Jane Marple, who conceals a razor-sharp brain behind a white puff of hair, innocent blue eyes and a pile of knitting. There’s also a five-book series featuring the married duo Tommy and Tuppence — which you really need to read in order, since the characters age through them — as well as a handful of standalone novels and short-story collections.

You don’t read these books for psychological insight or character development — as many critics have pointed out, if you got to know the casts better, you’d be able to solve the mysteries in a snap. No, you read Christie’s novels for the pleasure of the puzzle, which is usually fiendishly complicated even as she strews her clues in plain sight, often piling them atop the red herrings.

Though Christie loves odd murder weapons — an ancient dagger, an electrified chess board, a ukulele string — most of her victims are poisoned: by a blow dart dipped in a deadly toxin, arsenic fumes wafting off the wallpaper, tea spiked with thallium. “They can’t be poisoned every time, but I am happier when they are,” Christie, who trained as an apothecary assistant, once reportedly said.

If you’ve never read any of her novels, here’s where to start.

Introduce me to Hercule Poirot

Here’s Poirot, summed up in a single anecdote: When a grieving man confronts him, demanding, “Who are you? You don’t belong to the police,” Poirot informs him, “without conscious arrogance,” that he is “‘better than the police.’ It was, to him, a simple statement of fact.”

“The A.B.C. Murders,” which pits the Belgian detective against a serial killer, showcases him at his brainy best. First, Alice Asher dies in Andover; then, someone strangles Betty Bernard in Bexhill — and whoever is methodically murdering these people in alphabetical order is also taunting Poirot in a series of letters: “You fancy yourself, don’t you, at solving mysteries? Let us see, Mr. Clever Poirot, just how clever you can be.”

Like many other Poirot books, this one is narrated in part by his old friend Captain Hastings, who is a bit of a dolt — a classic unreliable narrator. (As a reader, you’re always wondering: Did Hastings remember that right?) Also, “The A.B.C. Murders” is one of the first times Christie dabbled in criminal psychology, with fantastic results. Pay close attention and you’ll actually be able to solve this one before Poirot’s final summation.

Don’t let her demure appearance fool you: In “The Murder at the Vicarage,” Jane Marple is not nearly as sweet as she looks, even though she’s swimming in lace doilies, tea cozies and antimacassars.

Hours after the vicar of St. Mary Mead has railed against the local magistrate — “Anyone who murdered Colonel Protheroe would be doing the world at large a favor!” — the man, loathed by the many, many people who knew him, is killed. (Working with an enormous cast is a Christie specialty.) Miss Marple, in her first outing here, is something of a nosy, tart-tongued gossip — in later books, Christie would soften her a bit — but she’s a first-rate snoop.

I’ve already seen the movie. Should I read the book?

There’s one Christie novel you absolutely should pick up no matter how many cinematic versions you’ve already watched: “Murder on the Orient Express.” Late one winter night, after a legendary luxury train stalls in a snowbank, a man is stabbed to death in his cabin. Conveniently enough (Christie is a big believer in coincidence), Hercule Poirot happens to be aboard. He briskly sets about interviewing the other passengers, using his famous “little grey cells” to determine what happened before revealing all in a stunning final scene. Even if you’re already familiar with the denouement, the book lets you do something the movies and TV shows do not: get inside Poirot’s gloriously egg-shaped head

Take me to a remote inn

In “Peril at End House,” Poirot and his old pal, Hastings, have arrived at a coastal resort in Cornwall. “The sea was a deep and lovely blue, the sky clear and the sun shining with all the single-hearted fervor an August sun should (but in England so often does not.)” Their holiday has barely begun when a young woman tells them, “I’ve had three escapes from sudden death in as many days.” Accidents? Poirot doesn’t think so: By the end of the first chapter, he’s convinced someone is trying to murder her.

Take me to a British manor house

In general, in Christie’s books, “home” is not a warm, nurturing place, and her mansions — often isolated, moldering and gloomy — make ideal spots for murder, like the one in her first novel, “The Mysterious Affair at Styles.” When the book opens, Hercule Poirot is living in somewhat straitened circumstances as a Great War refugee in the English countryside, not far from the estate of his benefactress, Emily Inglethorp, who is soon done in by a cup of strychnine-laced cocoa. (The Pharmaceutical Journal, which reviewed “The Mysterious Affair at Styles,” said it “has the rare merit of being correctly written.”) There are any number of suspects in Mrs. Inglethorp’s murder, including her cad of a husband, her churlish stepsons and even her best friend, who’s hiding a big secret.

Take me away from Europe

I’m fond of “The Man in the Brown Suit,” an over-the-top caper involving South Africa and diamonds, and “Murder in Mesopotamia,” set on an archaeological expedition in Iraq, but if I had to pick one Christie novel set abroad, it would be “Death on the Nile.” In this atmospheric novel set in the shadows of Egypt’s ruins, poor Hercule Poirot — who never gets to enjoy a vacation — is on a luxe Nile cruise when someone has the temerity to kill a young newlywed. Just as in “Murder on the Orient Express,” none of the passengers on the boat are who they appear to be; it’s up to Poirot to suss out their true identities and figure out why they’ve come to Egypt. A top-notch literary brainteaser.

Give me a shocking twist

That would be “The Murder of Roger Ackroyd,” the story of a wealthy man slain in his study less than a day after the woman he hoped to marry commits suicide. Although — as Hercule Poirot discovers — the dead man’s assorted friends, relatives and servants have reasons to wish him ill, “The Murder of Roger Ackroyd” will still leave you reeling. When you find out who the murderer is and begin leafing through the pages, looking for missed clues, you’ll realize just how completely Christie snookered you.

Read “And Then There Were None” (originally published with a racist title), possibly the most perfectly crafted locked-room mystery of all time. Very few Christie novels ratchet up the suspense like this one does. Eight strangers, invited to a house party on a tiny island miles off the Devon coast, arrive by water taxi to find two servants but no host; before long, someone begins picking them off one by one. As they grow more paranoid and mistrustful of one another, the mystery isn’t whether people will continue to die — it’s how they’ll be killed, and why.

Try “Endless Night,” a slim, unsettling tale thrumming with evil. It’s narrated by Michael Rogers, a good-looking drifter who’s just met, and married, a wealthy woman; together they’re building a house on what might be a cursed plot of land. The twist at the end isn’t one of Christie’s finest, but no other book of hers will fill you with such nerve-rattling unease.

I want a book I can finish in a day

Honestly, you can read any Christie in a day, but you’ll really fly through “Why Didn’t They Ask Evans?,” “The Moving Finger,” “By the Pricking of My Thumbs” or — my favorite — “A Murder Is Announced.” It opens one morning as the village of Chipping Cleghorn awakens to a strange notice in the local paper: “A Murder is Announced and will take place on Friday, October 29th at Little Paddocks at 6:30 p.m.” Naturally everyone shows up at Little Paddocks at the appointed day and time to see what will happen. This is a classic Christie plot, adroitly nudged along by Jane Marple. You’ll have to be exceptionally alert to solve it: Nearly every page is littered with false clues, and the smallest details are freighted with importance.

“Five Little Pigs,” I think, which is Poirot’s most cerebral outing. More than a decade after Caroline Crale was convicted of poisoning her husband and died in prison, her daughter, Carla — never convinced of her mother’s guilt — asks Poirot to look into the case. The five other people who were in the house that day are still alive, and as Poirot investigates each of them, he can’t get the nursery rhyme “Five Little Pigs” out of his head — you know, the one that starts “This little piggy went to market, this little piggy stayed home.”

A local policeman, exasperated with Poirot’s technique, tells him, “Don’t you grasp the elementary fact? No two people remember a thing in the same order anyway. And after all this time! Why, you’ll hear five accounts of five separate murders!”

“That,” says Poirot, “is what I am counting upon. It will be very instructive!”

And it is, of course. It’s pure pleasure to watch Poirot pick his way through the testimony and solve the crime. This is one of the last Christie novels I read, for some reason — probably because it was never on the shelf when I was checking them out at the library — and I still remember turning the last page and marveling at how it all came together.