APOLLO’S ARROW
The Profound and Enduring Impact of Coronavirus on the Way We Live
By Nicholas A. Christakis

THE WAVES COME AT US. We are now being hit with the third wave of case numbers in the Covid-19 tsunami and the first wave of books about it. There will be more, much more, of both.

The story changes daily and so do the prognostications about where this pandemic is going, how it will end (insofar as it ever does end), what toll it will take and whether it will serve as a critical inflection point, or not, for how we humans live on this planet. Will it deliver a deeply absorbed lesson, not just on disease preparedness but also on climate change and vanishing biological diversity, the three greatest problems we are facing and causing? Or will it drain away and be forgotten, as the 1918 influenza pandemic largely drained away, its lessons ignored and its grim particulars seemingly blocked from public memory

for decades? Along with the prognostications we’re also getting postgnostications (it’s not my neologism), efforts to understand the past by predicting what happened: Where did this virus come from? A wild animal? Which animal? How did it manage to be so nefariously well adapted for human infection? How did it get into us at the start? Has it evolved since? Scientists are at work on those questions, trapping wildlife in China, taking fecal samples and blood, culturing viruses, sequencing genomes from bats, pangolins and humans, and comparing them, as the clock ticks.

“Apollo’s Arrow,” by Nicholas Christakis, is a useful contribution to this initial wave of Covid books, sensible and comprehensive, intelligent and well sourced, albeit a little programmatic and dull. (Touching on past pandemics and epidemics, as well as our current crisis, the book takes its title from those terrible arrows, representing plague, that Apollo rained down on the Greeks in Book 1 of the “Iliad.”) It’s a broad survey, not a deep dive, and sweeps across most of the signal topics: the inept early responses to the outbreak, first in China and then in the United States; the back story of modern pandemics and pandemic threats, notably the 1918 influenza and SARS in 2003; the social shutdowns, the mask issue and the tension between civil liberties and public health; the grief, fear and lies that make a pandemic emotionally as well as medically punishing; the social and economic changes, forced by this virus, that may become permanent; the general question of how plagues end and the specific, more speculative question of how this one might.

Given that Christakis is a physician and sociologist, the co-author of an earlier book about social networks and how they shape lives, the co-author also of an influential paper on “social contagion theory” and the co-director of the Institute for Network Science at Yale, one naturally expects that “network science” might afford him special insight into Covid-19. This book delivers on that expectation moderately, with a short section on the superspreader phenomenon and such disease-math variables as the basic reproduction number (the average number of persons infected by each infected person in a naïve population), the case fatality rate, the threshold for herd immunity and a few others that have become familiar in recent months. 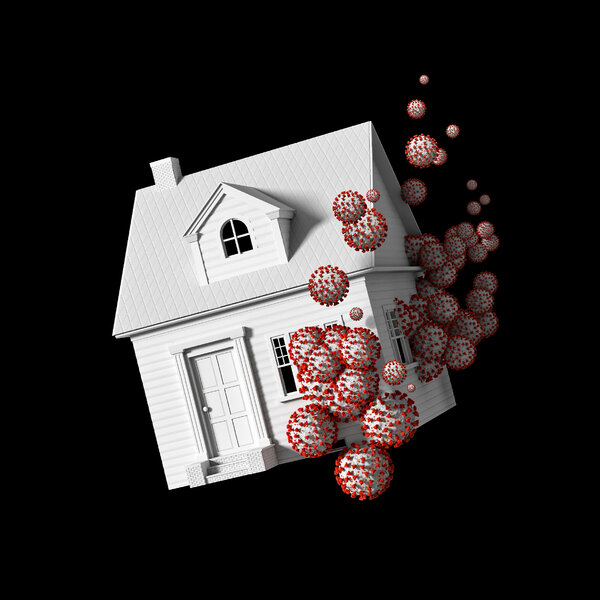 There’s also dispersion, less familiar, which is the variation in actual (not average) reproduction number from one infected person to another. If some people cause few secondary infections and some cause many, the dispersion is high. (The dispersion of Covid-19 is high.) Why? Although part of the answer may be that some individuals simply shed more virus, or wash their hands less, or refuse to wear masks or cough more, another contributor to superspreading, Christakis explains, is that certain people have many more social contacts than the average. He calls those “popular people,” and notes that they “are more likely to become infected themselves as well as more likely to infect numerous others.”

He illustrates this with some dots-and-lines network figures, showing who might have contact with whom. (These figures are weirdly resonant, resembling a similar graphic in an epidemiology paper from 1984 that depicted sexual connectivity among 40 early AIDS patients, which led to one man at the center, labelled “Patient O” by the researchers, to be demonized in a popular book as “Patient Zero.”) Although superspreader events — in a choir, at a funeral, during a White House reception — seem alarming, the existence of high variation in reproduction number for Covid-19 may actually have an ameliorating effect. According to Christakis, it may reduce the threshold for herd immunity. How so? Because “popular people” are more likely to get infected early in the pandemic, and most of them will survive, presumably with some immunity. “And if all the popular people became immune early, relatively more paths for the virus to spread through society would be cut off.”

That’s the good news. But because of its capacity to spread from asymptomatic cases and its relatively low case fatality rate, Christakis estimates, Covid-19 may still infect 40 percent of the global human population, and possibly as much as 60 percent, unless a vaccine becomes available soon. And what about when it does? Do we vaccinate the “popular people” first?

Another fascinating and controversial idea that Christakis examines is that the virus may become less virulent. He notes that “one way a pandemic … can come to an end is that the virus mutates over a period of years to get much milder.” But to say that this virus might mutate is a misleading truism; viruses continually mutate as they replicate, introducing small random errors into their genomes; and coronaviruses mutate more abundantly than many others. The mutations are raw material on which Darwinian natural selection may act, or not, to produce new adaptations. This is Evolution 101. If an increase in transmissibility or a decrease in virulence was adaptive for the virus, it would probably change in that way. Viruses do sometimes — not always — evolve toward lesser virulence within their hosts, if it allows them to spread more widely. But so far there’s very little evidence that either a reduction in virulence or an increase in transmissibility has occurred. Maybe this virus doesn’t need to evolve much because it’s already so damn successful.

Christakis describes an intriguing precedent, though, with some circumstantial evidence to support it. The virus called OC43 is a human coronavirus that causes nothing more severe than the common cold. In fact, along with one other coronavirus, it accounts for as much as 30 percent of all colds. Christakis cites research suggesting that OC43 spilled into people, from cattle, around 1890, which happened to coincide with the beginning of a severe pandemic that was known as the “Russian flu,” because its first major outbreak occurred in St. Petersburg, in December 1889. This “flu” swept out of Russia, across Europe, to the United States and much of the rest of the world, as fast as trains and ships could carry it, killing about a million people. Was it truly influenza? No one knows, because the concept “virus” hadn’t yet been defined, because viruses couldn’t be seen through a light microscope and because no modern scientific team has yet found a frozen victim of that 1890 pandemic, awakened a virus and identified it by genome sequencing.

There are hints. The lethality of the 1890 bug was low among children and especially high among people over 70. In addition to causing respiratory illness, it sometimes attacked the gastrointestinal tract or produced blazing headaches and body aches, symptoms that Christakis calls less typical of influenza. He suggests that the 1890 event was a pandemic of OC43, a coronavirus passed to humans from some Russian cow. “After being among us for a century, this virus would have further evolved to be a mild pathogen that just causes the common cold today.” Routine exposure to OC43 during childhood, he posits, would give a person some acquired immunity.

“It is still too early to know,” Christakis writes, how the Covid-19 virus might mutate. It is indeed early, and many more books will offer to help us understand the pandemic. But “Apollo’s Arrow” is a good start. Another volume, a useful addition to the same shelf, was published in 1859: “On the Origin of Species.” Infectious disease is all about evolution. If you don’t believe in that, you may as well not hold your breath for rescue by modern medicine. And there will always be another virus going around.