The pink ribbon, that ubiquitous emblem of breast cancer awareness, has long been an object of controversy and derision, but the poet and essayist Anne Boyer doesn’t just pull it loose, unfastening its dainty loop; she feeds it through a shredder and lights it on fire, incinerating its remains.

“The world is blood pink with respectability politics,” she writes, “as if anyone who dies from breast cancer has died of a bad attitude or eating a sausage or not trusting the word of a junior oncologist.”

Boyer’s extraordinary and furious new book, “The Undying,” is partly a memoir of her illness, diagnosed five years ago; she was 41 years old when she learned that the lump in her breast was triple-negative cancer, one of the deadliest kinds. But her story, told with searing specificity, is just one narrative thread in a book that reflects on the possibility — or necessity — of finding common cause in individual suffering.

At the time of her diagnosis, Boyer was a single mother raising a daughter, and making a modest living by teaching. She didn’t know much about breast cancer. “I had believed it was no longer very deadly and that its treatment had been made easy,” she writes; that “your life gets a little interrupted but then you get through.”

Her cancer was so aggressive that she was put on a chemotherapy regimen that could have killed her. It included infusions of Adriamycin — known as “the red devil,” a scarlet medication so corrosive that there’s a lifetime limit to how much of it someone can receive — and cyclophosphamide, a medicalized form of mustard gas. “To not submit to chemotherapy was to die,” she learns from her doctor. “To submit to it, I thought, was to feel like dying but possibly to live.”

Adriamycin was approved for use in the United States in 1974; it’s an old drug that “kills off cells totally in a classic way,” Boyer writes. To endure it “feels like an ancient rite.” The indiscriminate destruction wreaked by her chemo — vomiting, nerve damage, hair loss — stands in glaring contrast to the delicate image of her tumor when she first saw it on a glowing screen and snapped a picture of it with her iPhone. 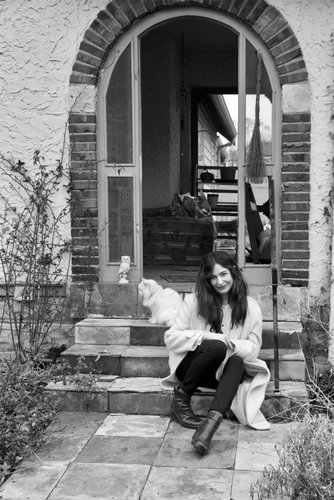 Boyer draws attention to these discrepancies. On the one side: progress, data and “screen life.” On the other: sudden nosebleeds, stubborn bruises and the primitive pain of fingernails lifting from their beds. She enters her specifics into LifeMath, an online prognostic calculator that beams out a pictograph of her chances for survival — 52 percent, represented by 52 green smiley faces.

But as alienating as some screens are, she learns she can find commiseration in them, too. She watches YouTube videos posted by other women with triple-negative breast cancer. The women are bald like Boyer, their faces puffy from steroids. When one of them is close to dying, Boyer grieves for her and is “terrified for myself.”

Those vloggers offer Boyer something that she can’t quite find from classic texts like Susan Sontag’s “Illness as Metaphor” and Audre Lorde’s “The Cancer Journals” — a sense of what it feels like to have cancer right now, four decades after those books first appeared. Sontag was undergoing treatment for cancer but wrote impersonally, careful to avoid writing “I” and “cancer” in the same sentence; Lorde’s first-person book was published into a silence that has since been replaced by a din. Boyer notices that the old reluctance to speak publicly about one’s breast cancer has now become “an obligation, for those women who have it, to always do so.”

“I was afraid, on the first day, for my vocabulary,” Boyer writes, recalling how her journal entry for the date when she found the lump mentioned everything but the lump. She was telling herself one story “so I wouldn’t have to tell another.” She knows how writers lie by fixating on the “precisely avoidant detail.” Writers are instructed to show, don’t tell, but Boyer, who wrote about the limits of literature in her 2015 book “Garments Against Women,” argues that “telling is that other truth,” and might be ethically necessary. Until she felt the lump, she didn’t sense she was sick, even though she might have been dying. “The senses,” she writes, “are prone to showing’s lies.”

So she tells us not just what she feels but also what she thinks: about women and “sororal death,” overtreatment and the “ruinous carcinogenosphere.” She lives in one of the richest countries in the world, yet the hospital considered her double mastectomy an outpatient procedure, evicting her from the recovery ward before she could stand up. She had to return to work 10 days after her surgery and give a lecture on Walt Whitman with drainage bags stitched to her chest.

Reading Lorde’s description of spending five days in the hospital after the removal of a breast, Boyer admits to feeling “sometimes envious of the horrible circumstances of the past because they are at least differently horrible and differently degraded than our era’s own.” Some new kinds of degradation are so tied to technological change that they would have been completely unfathomable before. In 2014, in a pledge to raise “awareness” in partnership with the Susan G. Komen breast cancer foundation, the fossil-fuels company Baker Hughes produced a thousand pink drill bits to be used in hydraulic fracturing — even though chemicals released by fracking have been linked to cancer.

Where Boyer finds a measure of hope is in pain — not in valorizing it (insufficient), or in conquering it (impossible), but in recognizing it as something that’s real and shared with others. “Pain was my body being reasonable,” she writes. She recalls a time when her fellow patients joined her in the infusion room “to say what appears to hurt actually does hurt,” spurring her to grasp this strange solidarity, “the shared vistas of the terribly felt.”

Even the most resonant work of literature is historically specific, contingent not just on an author’s imagination but on where and when it was written, the context that gave it form. Boyer has more books in her, and when the treatment looks like it’s beginning to work she imagines what else she might write. “Now that I am undying, the world is full of possibility.”

New On Netflix In January 2020: All Movies, TV Shows, And Originals Coming This Month

'The Incredible Dr. Pol': Why He Doesn't Wear Surgical Gloves or Mask During Surgeries

Emmerdale dropped secret clues Pierce was back as he murders Graham