Raising free-range chickens isn’t easy, a Chinese farmer named Jiang tells Xiaowei Wang in her fascinating new book, “Blockchain Chicken Farm.” Why? “Chickens aren’t very smart,” he notes; if you leave lights on, they’ll cluster around “and they overcrowd each other, killing each other. A kind of chicken stampede.” Even if you get the chickens safely grown in their sunny, free-range yards, you have a new problem: You have to convince your finicky customers, in far-off cities, that you’re telling the truth about how the chickens were raised.

So Jiang turned to high-tech chicken surveillance. He outfitted his chickens with wearable legbands that record their movements — “a chicken Fitbit of sorts” — and worked with a tech start-up to record the data on a blockchain. A blockchain is a type of software, most famously used to create Bitcoin, that can make nearly tamper-proof digital records. When customers buy the chicken, they don’t need to take Jiang’s word that his birds strolled around in the sunshine. They can trust the implacable math. Blockchain in this case is a clever tech solution that also happens to have a bleak libertarian philosophy behind it. As Wang notes, some blockchain coders are fond of citing Thomas Hobbes’s dismal view of human nature: Nobody can trust anyone else.

It’s a weird, delightful and unsettling tableau. In “Blockchain Chicken Farm,” Wang introduces us to dozens of such quixotic figures as she hopscotches the country on a mission: to document how technology is transforming the lives of China’s rural poor. 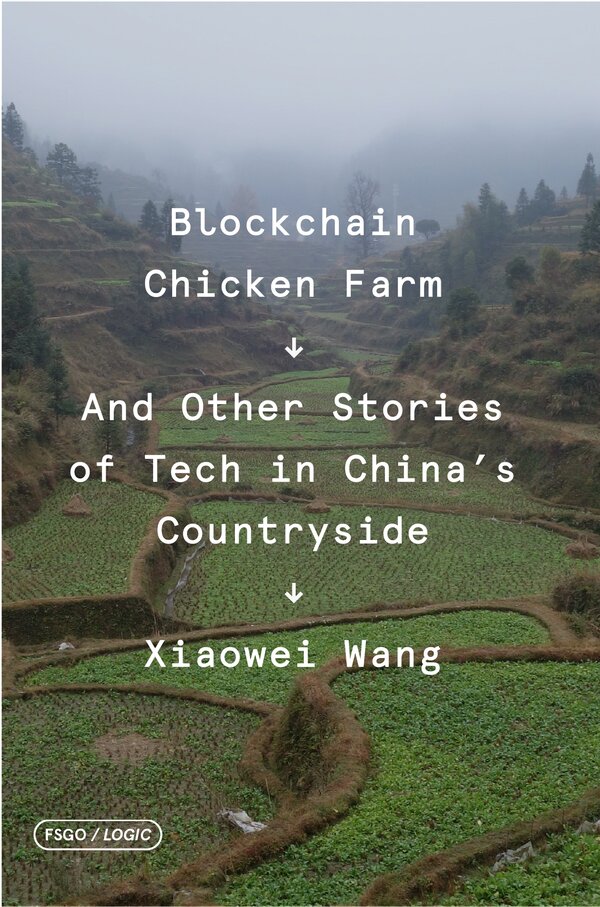 It’s good to turn on the klieg lights here. Rural China is a part of the world Americans likely ponder very little, despite being economically entwined with it. To the extent China looms in the American imagination, it’s mostly as an economic adversary, a land that has mercilessly stolen American manufacturing jobs by offering dirt-cheap labor in gleaming factories. (At least, that’s the message the White House has hammered for years now.) It’s certainly true that the country’s manufacturing explosion has helped create a much wealthier China. But it has also produced a rural-urban economic schism that neatly mirrors that of the United States itself. While the cities have gotten rich, the countryside has been left behind, with higher infant mortality, lower life expectancy and markedly lower educational attainment.

This divide worries China’s leaders deeply. Factories in urban China aren’t quite so competitive anymore, because the increasing wealth of cities has jacked up the price of factory labor. Meanwhile, dismal work opportunities in rural areas send young people fleeing for cities, where they find that the high cost of living — and lack of legal status, thanks to China’s “Hukou” registration system, which incentivizes people to stay in certain geographical areas — means that homeownership and even car ownership are out of reach.

This creates, Wang notes, a powder keg. “Young, able-bodied workers, especially young men, untethered from car or house ownership, job or family are threats to political stability,” she writes, an observation that might give Americans, too, a shudder of recognition. But whereas our federal government has given up on any serious national policy for its countryside, the Chinese government and private sector are busily — even desperately — trying to engineer a technologically fueled “rural revitalization.”

Wang traveled the country to see what this looks like in practice. She has a keen eye for the steampunk-like details of ancient rural areas now shot through with internet opportunity. She visits Dinglou, a “Taobao village” — which is to say, a digital-age company town where residents make stuff to sell on Taobao, the e-commerce platform of Alibaba, China’s high-tech behemoth. In Dinglou, the specialty is making costumes — like Snow White outfits for Halloween, for example — that they ship worldwide, relying on Alipay (another Alibaba creation) for their banking needs.

“Nothing beats coming back to your hometown to run a Taobao business!” banners hung in the city declare, and families transform their houses into factories. Wang watches as a woman “in her kitten-heel shoes and red skirt” clambers onto a table to jigsaw expertly through layers of fabric for a set of costumes, while a chicken squawks nearby. She travels to Zhejiang Province, where pearl farmers patiently feed mussels pig and chicken feces, selling their prize pearls for top dollar and shipping the lousy ones halfway around the globe to American live-streamers, who sell them for $20 apiece via influencer-style “Pearl Parties” online.

Wang hangs out with a 25-year-old man named Sun Wei, who — despite having only a high school degree — has built a career flying drones to do aerial reconnaissance for China’s small farmers. Wei radiates a bonhomie that reminds one of America’s postwar boom: “It’s a feeling that you have a right to the future, a right to imagination beyond the immediacy of the day,” as Wang puts it. The technological boom produces genuine moments of rural prosperity, when it works.

Though sometimes it doesn’t, quite. As a former software engineer in San Francisco, Wang has a grim appreciation for the dark side effects that technology can bring — the “breaking things” suffix to the diktat of “moving fast.”

Consider the boom in the production of pork, a hot commodity among China’s increasingly prosperous diners. To increase the yield of pork farms, Alibaba trained a new artificial intelligence, “ET Agricultural Brain,” on vast amounts of data from pork operations, the better to predict how to increase yield. (They set up entire “digital towns” where young rural workers sit all day long clicking on pictures of pigs, labeling them as sick or healthy, to feed the A.I.’s smarts.) In the short run, the A.I. does indeed help optimize soaring pork production. It’s a win for diners, for pork producers and for government, which yearns for China to achieve “food security.” (“The food bowl of the Chinese people must always remain firmly in their own hands,” as Xi Jinping, general secretary of the Chinese Communist Party, has said.)

But nature does not always respond so obediently. One key strategy that emerges from all this high-efficiency pork farming? Feeding the animals “industrial pig swill,” a goulash that, cannibalistically, includes ground-up pig parts. And this, in turn, creates dangerous new vectors for disease, spreading the dreaded African swine fever so badly that by 2019 it tore through China and destroyed nearly one-quarter of the world’s pigs.

Certainly, technology is good at “scaling” — making things grow big, run more efficiently, move more speedily. With its hundreds of millions of rural poor clamoring to join the middle class, China craves scale. (“The West doesn’t understand our problems. We just have too many people,” Wang is told.) But efficiency can cause problems of its own, leaving China caught in a dilemma: the need for scale, the peril scale brings.

Wang also finds that, for rural China, tech-propelled business models can produce the grim dynamics of the gig economy, where a far-off tech giant runs your life. The blockchain chicken software? It’s nifty, but the farmer neither understands the technology nor owns it; it’s provided by a tech firm that in the first year of their collaboration ordered 6,000 chickens in advance to sell off to an online supermarket, and in the second year, nothing. Meanwhile, those Taobao villages also contain some embittered merchants who hate the e-commerce platform, because it allows buyers to demand refunds long after they’ve received their goods. One shoemaker has lost so much money this way that he’s forced to make lower- and lower-quality shoes to keep his profits up. “It’s all a scam,” he says.

Wang has written a nuanced and thought-provoking account, and it is not easy to tell, after you’re done reading it, how rural China will fare — whether its tiptoe toward prosperity and tech savviness is durable. Given that China’s economic fate is now so entwined with the world, one hopes it can thread the needle. When Wang visits the “Cloud Computing Museum” of Alibaba, she sees the firm’s first homegrown server from years ago, adorned with a poem:

code
line by line
builds the foundation
for eternity
just like sand
grain by grain
calms the roaring sea.