After backing out of a deal with Senator Josh Hawley, a prominent supporter of former President Donald J. Trump, the company announced this month that it would publish two books by former Vice President Mike Pence. Dana Canedy, who joined Simon & Schuster as publisher last year, called Mr. Pence’s memoir “the definitive book on one of the most consequential presidencies in American history.” That’s when much of the staff erupted in protest.

On Monday, editors and other employees at Simon & Schuster delivered a petition to management demanding an end to the deal, with signatures from more than 200 employees and 3,500 outside supporters, including Simon & Schuster authors such as Jesmyn Ward and Scott Westerfeld.

Most were probably not aware that the company has also signed the former Trump adviser Kellyanne Conway, according to people familiar with the matter — a move that is sure to throw gas on the fire.

In another era, book deals with former White House officials were viewed as prestigious and uncontroversial, and major publishers have long maintained that putting out books from across the political spectrum is not only good for business but an essential part of their mission. In today’s hyperpartisan environment, however, Simon & Schuster has become a test case for how publishers are trying to draw a line over who is acceptable to publish, and how firmly executives will hold in the face of criticism from their own authors and employees.

Many publishers and editors have said privately that they would be reluctant to acquire a book by Mr. Trump because of the outcry that would ensue and the potential legal exposure they would face if Mr. Trump used a memoir to promote the false view that he won the 2020 election.

But the reticence extends beyond Mr. Trump himself, and several publishers acknowledge that there are certain ideological lines that they won’t cross. Some said they wouldn’t acquire books by politicians or pundits who questioned the results of the presidential election. Another bright line is working with people who promoted the false narratives or conspiracy theories that Mr. Trump espoused.

Certain literary agents representing Trump officials have adjusted their sales tactics. A few are avoiding large auctions in hopes of staving off a backlash until after a contract is signed, according to some publishing executives.

“What I’m watching very closely is the succession of lines crossed,” said Thomas Spence, the president of Regnery, a conservative publisher. “People start to wonder: Whom else might they shut down?” 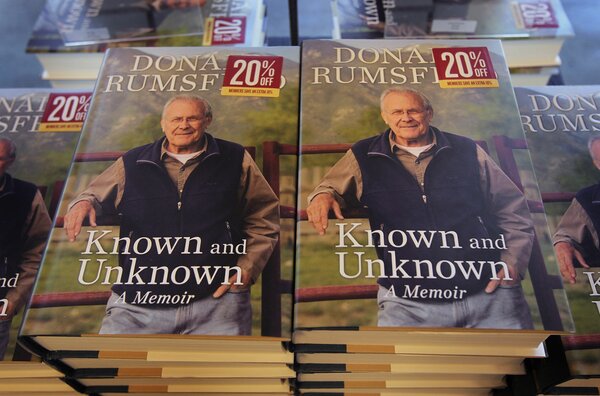 Those who work in the industry, which is concentrated in New York, tend to be left leaning in their politics, but publishing houses have long adhered to the principle of political neutrality when it comes to who they publish. After the end of George W. Bush’s presidency, major publishers signed deals with administration officials like Dick Cheney, Donald Rumsfeld, Condoleezza Rice and Mr. Bush himself, with little blowback. (An imprint of Penguin Random House published a book of portraits and stories about immigrants by Mr. Bush last week called “Out of Many, One.”)

After the 2020 election, those ideals have been tested in unprecedented ways.

“There is a tension there — on the one hand, I’ve always believed, and I still believe fervently, that we need to publish major voices that are at the center of the national conversation, whether we agree with them or not,” said Adrian Zackheim, the president and publisher of two Penguin Random House imprints, including Sentinel, which is geared toward conservative books. “On the other hand, we have to be leery of public figures who have come to be associated with blatant falsehoods.”

At the same time, conservative publishers and some literary agents say there is enormous demand for books from voices on the right, particularly now that Republicans are out of power, and publishers are demonstrating that they are eager to work with politicians they regard as acceptable mainstream conservatives. Politico reported that William P. Barr, Trump’s former attorney general, sold a book about his role at the Justice Department. Sentinel acquired a book by Supreme Court Justice Amy Coney Barrett, whose appointment by Mr. Trump last year caused an uproar on the left. Ms. Conway’s book will be published by Threshold, a Simon & Schuster imprint focused on conservative titles, though a person familiar with it said it would be more of a memoir than a standard political book.

The company published several political blockbusters last year, including Mary L. Trump’s “Too Much and Never Enough” and John R. Bolton’s “The Room Where It Happened.” This year has been more complicated.

In January, Simon & Schuster dropped plans to release Mr. Hawley’s book following criticism of his efforts to overturn the election and accusations that he helped incite the Capitol riot on Jan. 6. This month, it said it would not distribute a title, published by Post Hill Press, a small publisher in Tennessee, by one of the police officers in the raid that killed Breonna Taylor.

“We come to work each day to publish, not cancel,” Mr. Karp wrote, “which is the most extreme decision a publisher can make, and one that runs counter to the very core of our mission to publish a diversity of voices and perspectives.”

Staff members who organized the petition were not satisfied by his response. They sent a letter to Mr. Karp and Ms. Canedy on Monday along with the petition.

“Let’s be clear: the First Amendment protects free speech from legal encroachment. It in no way calls for publishing companies to publish all viewpoints, much less those as dangerous as Mike Pence’s,” the letter said. “When S&S chose to sign Mike Pence, we broke the public’s trust in our editorial process, and blatantly contradicted previous public claims in support of Black and other lives made vulnerable by structural oppression.”

Some publishing employees said the decision to sign Mr. Pence and other Trump officials was especially jarring as major publishers have taken pains to stress their commitment to diversity over the past year.

“It feels like you’re talking out of both sides of your mouth,” said Stephanie Guerdan, an assistant editor at HarperCollins, who was speaking in her role as a shop steward at its union. “You want to make a safe space for your Black employees and your queer employees and put out your anti-Asian-discrimination statements. You can’t say the company supports these causes and then give money to people who have actively hurt those causes.”

The reluctance among mainstream publishers to work with some conservatives has created an opportunity for smaller independent houses.

“The reaction of people on the right to the cancellation of political books is to double down, so we have lots of books to publish,” said Adam Bellow, who founded the Broadside imprint at HarperCollins and is now an executive editor at Bombardier, an imprint of Post Hill, which has published books by Representative Matt Gaetz and other prominent Republicans.

Mr. Bellow added that some conservatives have grown wary of selling their books to mainstream publishing houses.

The highly charged atmosphere could lead to a realignment in the political publishing landscape, with the formation of a new literary niche that caters to voices on the far right.

The D.C. public relations firm Athos started a literary agency and is representing some prominent conservatives. Co-founded by Alexei Woltornist, who worked in communications in the Department of Homeland Security under Mr. Trump, and Jonathan Bronitsky, who served as Mr. Barr’s chief speechwriter, Athos recently sold Bombardier a book by Scott Atlas, Mr. Trump’s former coronavirus adviser, about the Trump administration’s handling of the pandemic.

Conservative publishers are also experimenting with direct-to-consumer sales with a new online bookstore, conservativereaders.com, that was created by Mr. Bellow and a small group of colleagues and investors. With a new online outlet, they are aiming to develop an alternative platform to traditional retailers and Amazon in the event that stores refuse to sell a controversial title.

Some predict the appetite for political books will only continue to grow.

“After the election, there was this big question mark over the future of the political book,” the literary agent Rafe Sagalyn said, “and I think we’re learning now that they’re very much in demand.”